Democratic efforts to impeach President Trump for a second time are well underway, with a senior Democratic lawmaker telling Bloomberg that a House vote on articles of impeachment could come as soon as Tuesday, which would then be held for several months before they send them to the Senate in order to avoid triggering an immediate trial. 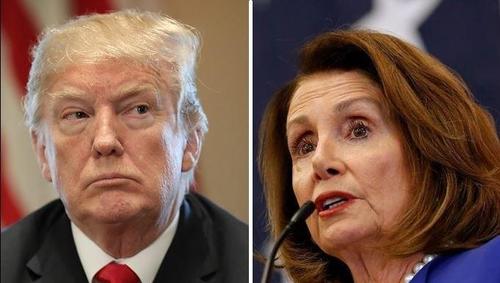 According to House Majority Whip James Clyburn, Democrats are “working hard” on an article of impeachment which demonstrates that Trump is “unqualified to be president.”

Meanwhile, House Speaker Nancy Pelosi gave Trump an ultimatum last week; resign immediately, or face impeachment 2.0 for encouraging supporters to march on Capitol Hill last Wednesday – when a mostly peaceful protest against the counting of Electoral College votes turned into what the left is calling an ‘insurrection’ after law enforcement oddly opened the doors to the building, allowing protesters to ‘storm’ the Capitol.

Capitol police open doors for the protestors. They stand aside and invite them inside. pic.twitter.com/OnSd3KGzz5

According to Bloomberg, Pelosi is moving cautiously despite internal pressure from her caucus to punish Trump – while President-elect Joe Biden has made clear that he isn’t interested in a Trump impeachment sideshow while his administration is trying to focus on their agenda. Pelosi has told lawmakers to be “prepared to return to Washington” this week for a potential impeachment vote or some other type of formal response to Trump’s alleged role in encouraging the breach on Capitol hill that left five people dead (despite the fact that he told supporters to peacefully assemble and to peacefully leave following the incident).

According to Clyburn, however, any successful impeachment in the House could be held for 100 days or more to avoid upstaging Biden.

“Let’s give President-elect Biden the 100 days he needs to get his agenda off and running, and maybe we’ll send the articles some time after that,” he said.

At least 195 House Democrats have signed on to one of the impeachment articles, and some Republicans have said they believe Trump conduct is impeachable, although they question how the process would play out with less than two weeks left in his term.

In a letter to fellow Democrats Saturday, Pelosi stopped short of saying she intended to move forward with impeachment or another process aimed at removing Trump from office before his term expires on Jan. 20, yet she insisted that he be held responsible in some fashion. –Bloomberg

“It is absolutely essential that those who perpetrated the assault on our democracy be held accountable,” said Pelosi in a Saturday letter. “There must be a recognition that this desecration was instigated by the president.”

Meanwhile, a small group of House Republicans led by Colorado Rep. Ken Buck are trying to encourage Biden to persuade Pelosi to back off a Trump impeachment – warning in a Saturday letter that doing so would inflame Trump supporters and derail Biden’s plans to ‘unify the country’ (as social media giants engage in politically-driven cancel spree against Trump and his supporters).

As far as Trump leaving office now? Biden suggests letting the presidential transition occur so his administration can “get our agenda moving as quickly as we can.”

“It’s important we get on with the business getting him out of office. The quickest way that that will happen is us being sworn in on the 20th,” Biden said during a Wilmington, Delaware press conference last week. “I am focused now on us taking control as president and vice president on the 20th, and to get our agenda moving as quickly as we can.“

Politics, Positivism, & The Science Of Tyranny

The best UNCENSORED sources for real-time breaking news on everything: Brighteon.social, Censored.news and Brighteon.com