The latest real-time data from BofA credit and debit card usage showed a marked turnaround in spending from the December slump – according to BofA economist Michelle Meyer, total card spending was up 9.7% YOY for the 7-days ending Jan 9th, owing in large part to the $900bn COVID-relief stimulus passed at year-end. This is up from -0.6% just 9 days earlier, and confirmed that the latest  government-funded spending spree has arrived.

The surge in post-holiday spending thanks to the $900BN stimulus can be seen on both a total card and ex-auto basis in the two charts below:

As before, the bulk of the excess spending was funded by debit card, which is where government stimulus funds were deposited. And, as before, most spending took place online which was about 80% higher compared to a year ago while traditional retail spending was flat to slightly down Y/Y.

According to the Treasury, $112bn of “Economic Impact Payments” were distributed through direct deposit in the first week of the year. Using BAC aggregated direct deposit data, one can isolate the cohort of households who received the payment and track aggregated spending for this population versus the rest of the sample to gauge the impact of the stimulus. This is the same exercise we showed following the April CARES stimulus.

Here are the main points: 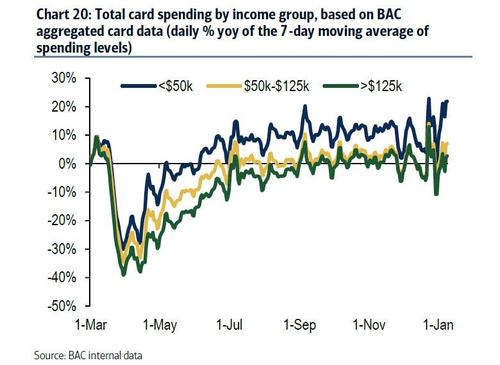 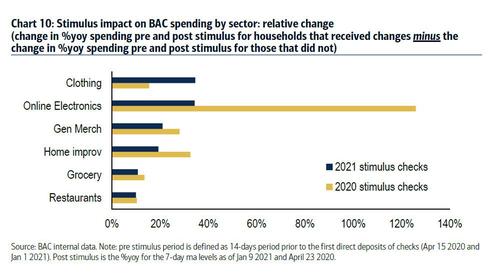 Bottom line: lower income households, who have the highest propensity to spend any “unexpected” financial windfall, are doing just that, which means that retail sales in January will be off the charts. The only question – for market participants – is how much of this latest stimulus, or the coming $1.9 trillion one for that matter, will enter the market?