By Christopher Dembik, head of macro analysis at Saxo Bank

This is certainly the most important chart ahead of Thursday’s ECB meeting. 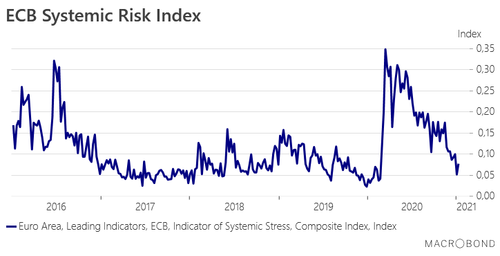 Initially developed by Hollo, Kremer and Lo Duca in 2012 in the midst of the euro area sovereign debt crisis, the ECB systemic risk indicator is based on fifteen financial stress measures and is used to track emerging market stress that could force the ECB to step in in the market. It is not a leading indicator, but it is very useful to assess the evolution of monetary policy in the euro area and judge the market impact of the latest policy moves.

What is particularly striking is that market stress is almost back to pre-crisis level following the latest ECB measures announced in December (increase in the PEPP envelope and extension by another nine months until at least the end of March 2022). After spiking to an annual peak at 0.34 in mid-March (which is still below levels reached in 2012), it has moved downward and is now almost back to where it was before the outbreak , around 0.07. In our view, this indicator perfectly summarizes how successful was the ECB to contain financial risk in 2020 and is a clear signal that no further monetary action is needed in the short term.

The muted market reaction to rising political risk in the euro area (with political crises in Italy and the Netherlands) constitutes further proof of the ECB’s success. Basically, this week’s meeting will mostly consist in another communication test for the ECB president Lagarde with two main points of interest: the evolution of the euro nominal effective exchange rate, which is getting growing attention by the Governing Council as revealed by the minutes of the December meeting, and the evolution of inflation that could temporarily move upwards due to higher commodity prices, base-effect in Q2 and supply-side bottlenecks that are particularly significant in Europe.

A strong euro (which mostly results from lower US dollar) and inflationary pressures should be regarded as transitionary by the ECB, therefore not resulting in further policy action.