Was that it for the bitcoin “crash”?

Just as bitcoin was tumbling last night, we refuted the latest report from JPMorgan (see “JPMorgan Tries To Slam Bitcoin Again, Fails Spectacularly“) which – for the third time in 2 months – tried to slam the cryptocurrency by claiming that bitcoin was not a good “diversifier” even as it paradoxically made the strongest possible case for bitcoin as a diversifier, stating that “cryptocurrencies would uniquely protect portfolios against a simultaneous loss of faith in a country’s currency and its payments system, because they are produced and they circulate outside conventional and regulated channels” and adding that “as insurance (or a lottery ticket) against dystopia, some exposure to these assets could be always justified irrespective of liquidity and volatility concerns.“

Well, JPMorgan, this may comes as news to you, but nobody is buying bitcoin to diversify their stock holdings – for the simple reason that as Convoy Investment put it “Bitcoin Is A Giant Bubble… But The Global Fiat System Is An Even Bigger Bubble“, but to precisely hedge the collapse of the entire fiat/monetary system. 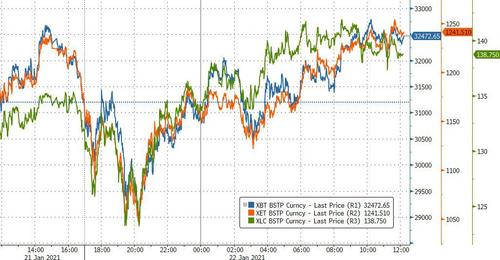 No matter though, because the sharp selloff in bitcoin, ostensibly sparked by fake news about a “double-spending” in the bitcoin blockchain, was enough to bring all the “bubble has burst” callers out of the woodwork, with Deutsche Bank’s Jim Reid writing this morning, humorously to be sure, that “the Bitcoin price move to the recent peak was ‘only’ around half that of the tulip bubble back in 1637. It’s probably not a chart to take too seriously but it shows some of the big bubble type moves of the last 50 years in some historical context.”

Reid did have a very good point, however, noting that “in doing the research on bubbles for the pack, it was noticeable that there were more potential examples of bubbles over the last 50 years than any other period in history” noting that his “view has long been that it’s also a product of the fiat money system we’ve been in since 1971.” Which, of course, is the very reason behind bitcoin’s explosive growth.

In retrospect, humorous or not, it once again appears that rumors of bitcoin’s demise have once again been premature as the crypto is now more than 11% of its overnight lows, perhaps catalyzed by the latest news out of Microstrategy, which early on Friday announced that it had bought another $10 million in bitcoin at an average price of $31,808. From the 8K:

In response, and also thanks to the $1.1 billion in bitcoin it already holds, MicroStrategy shares rose as much as 5.5% early Friday. Meanwhile, bitcoin is back above $32,000 and has wiped out most of yesterday’s sharp drop.