One of the key catalysts behind the original round of meme stocks such as GME and AMC surging in late January in “rip your face off” rallies, was targeting companies that were heavily short, in some cases – such as Gamestop – with a synthetic short position that was 140% of the float. Since then, the short interest in all of these original meme companies has collapsed dramatically as hedge funds that were short suffered tremendous, and in some cases, irreparable losses forcing them to cover at any cost (and price).

What is remarkable is that the targeted WallStreetBets raids of heavily shorted stocks took place in an environment where marketwide shorts were actually at the lowest level on record as a result of the endless levitation in the S&P500 thanks to the trillions of Fed monetary generosity, with most industries ranking in the 0 percentile vs history in terms of short interest as a % of market cap (with the exception of energy, where the short squeeze has yet to come at the industry level).

But is that really true? Well, it may have been until about two weeks ago but then things changed drastically.

As JPMorgan wrote on Tuesday, while hedge funds were quite positive on markets especially in the US, over the past 6+ months (JPM had seen net buying most days since late July 2020), “following the recent weakness and rotation, we’ve seen HFs react by adding more shorts, which are picking up after the large covering in late Jan”, and remarkably Monday was the largest day of short additions in North America since late June 2020!

Meanwhile, as JPM notes today in its summary of the furious rip higher in Gamestop and AMC, “we may be seeing the beginning of the Retail impulse returning.” Translation: the WallStreetBets “incels” are back for round two and are trying to make lightning strike twice, by focusing on the two more popular shorts of the latest round of short squeezes: 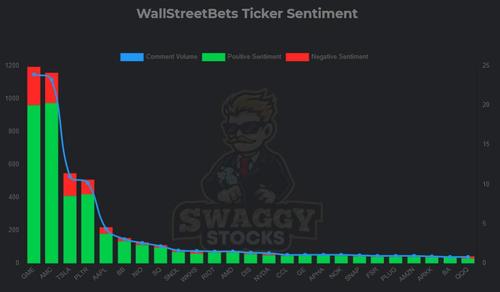 This means that just as hedge funds reloaded on their shorts expecting a rapid acceleration in the recent market correction… the reddit rebellion is back and is set to squeeze all those millions in newly layered shorts which are not being picked up in the latest data which is as of two weeks ago, or just as the short flush peak and a new layer of shorting was starting.

And while one can only dream, it would be truly remarkable if – expecting that lightning will not strike twice – the likes of Melvin Capital doubled down on their GME shorts after suffering catastrophic losses on the same position. While we doubt god can be that cruel, here is an artist’s rendering of “what if”…

6 Reasons the US Postal Service Is in Crisis

The Ice Age Arrives: Average Sovereign Yield Outside The US Turns Negative For The First Time Ever