Albert Edwards: We Are At The Breaking Point

Albert Edwards: We Are At The Breaking Point

In the past month we have been inundated with analyst reports warning that a sharp spike in yields, especially above 1.50%, would be a trigger for a broader equity selloff (and as noted earlier, we were less than 1 basis point away from 1.50%). So amid this bearish orgy we would be remiss to not point out that this morning none other than SocGen’s resident inhouse permabear, Albert Edwards, writes that he recently predicted that forecasts of US 10y yields rising back to 1½% “would prove too bearish as the equity market, and especially US tech stocks, would implode before we got there. At the time of writing despite the US 10y yield approaching 1½%, tech stocks, although certainly not yet imploding, have begun to look decidedly squishy.”

Edwards first makes some observations on the recent sharp move lower in bond prices, which he puts in context by noting that while “it’s been a bad start to the year for government bond investors” the recent losses come only “after the stunning gains made at the height of the pandemic that saw 10y yields collapse to an intra-day low of 0.3% in March from 1.6% only a month before! Prices may have fallen 4% over the last 3 months, but that is not unusual over the past 15 years, especially in the context of the huge price rises last year.”

Another way of looking at the recent moves is from their previous 12-month peak, where “even the larger 20% price decline seen in the 30y bond is not an infrequent sight.”

As he next adds, “the recent rotation out of ‘growth’ stocks into value stocks” is also not particularly noticeable in a longer-term context. “Maybe equity investors aren’t quite as convinced about a brave new reflationary world lying immediately ahead as most commentators seem to be?”

All of that is, of course, in the past. But what about the future?

Here, Edwards echoes what we said earlier, and says that the bullish case is “if bond yields continue to rise and there is a smooth rotation out of growth and defensive stocks into value and cyclical stocks, the Fed will remain sanguine.” But the risk is growing that “with so many bubbles blown by the Fed something will burst soon. And despite the widespread certainty that the Fed can micro-manage the equity market, and levitate it at will, the real shocker would be if the Fed lost control in any impending equity riot.”

He finally reminds readers of a chart he showed at the start of the year (originally from Dhaval Joshi of the BCA), when people were still wondering how much of a rise in bond yields the equity market could tolerate. Well, the chart showed that “a yield gap of 2% was the point at which the tech sector started to lead the overall equity market lower.” 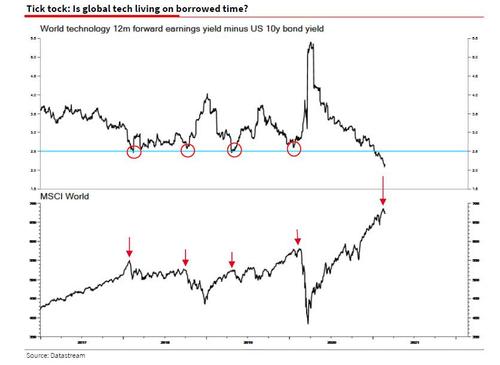 Edwards ominously concludes that “the real risk is that further monetary concessions won’t appease the mob and Fed control is lost. For as Jeremy Grantham reminded us recently, this bubble has now become as big as anything in history as will be the inevitable denouement.”

Why Competition Is the Antidote to Big Tech’s Bad Behavior, Not Politicians