Syrian state television is reporting new Israeli airstrikes against the capital of Damascus on Sunday.

SANA state news said that Syrian air defenses were active in response to an “Israeli aggression in the vicinity of Damascus” after explosions were heard above the capital, according to Reuters. The strike was reportedly near the international airport.

While the Israeli military has yet to confirm or deny the airstrikes, which is typical of such attacks which have occurred almost on a weekly basis for much of the past year, Israeli public broadcasting is now saying it’s in “response” to the “Iranian attack on an Israeli ship near the Gulf of Oman this weekend.”

It appears Israel is seeking to punish both Iran and Syria for Thursday’s incident in the Gulf of Oman.

As we reported this weekend, Israel is blaming Iran for the Thursday blast in the Gulf of Oman wherein a cargo vessel owned by an Israeli businessman was hit by a ‘mystery’ explosion, forcing it to divert to the nearest port after sustaining severe damage.

#BREAKING: reported Israeli airstrike in Syria is a response to an Iranian attack on an Israeli ship near the Gulf of Oman this weekend, Israeli media reports

Defense Minister Benny Gantz had announced Saturday as part of an “initial assessment” that Tel Aviv believes Iran was behind a bomb attack on the car-carrier vessel, identified as the Helios Ray.

Suspicion of Iran’s involvement has been rampant in Israeli media since the blast. 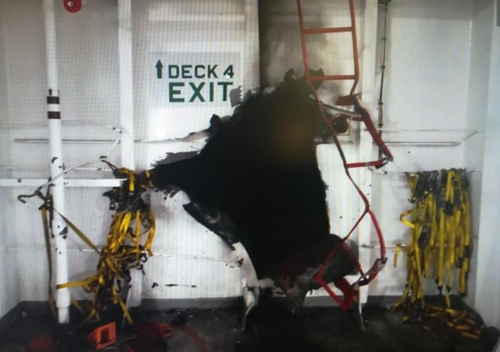 However, there’s yet to be definitive proof or evidence that either a state actor or terrorist elements were involved, much less any specific details released to the public. Regardless, Israel has acted apparently against ‘Iranian positions’ near Damascus.

“Iran is looking to hit Israeli infrastructure and Israeli citizens,” Defense Minister Benny Gantz had said in prior remarks, according to Reuters. “The location of the ship in relative close proximity to Iran raises the notion, the assessment, that it is the Iranians,” he said.

Crucially this newest Israeli attack on Damascus comes just days after for the first time Biden ordered US airstrikes on supposed ‘Iranian positions’ in Syria’s east.