World Beer Index 2021: What’s The Price Of A Beer In Your Country?

World Beer Index 2021: What’s The Price Of A Beer In Your Country?

Although fewer people have been able to grab a beer at the pub during this pandemic, Visual Capitalist’s Iman Ghosh note that the global desire for beer prevails. For example, sales of the Corona beer actually shot up in the past year, despite—or perhaps because of—associations with the coronavirus.

This World Beer Index from Expensivity compares the average price of a bottle of beer in 58 countries in a detailed map. Additionally, we show which countries spend the most on beer per capita, and just how much beer people really drink. 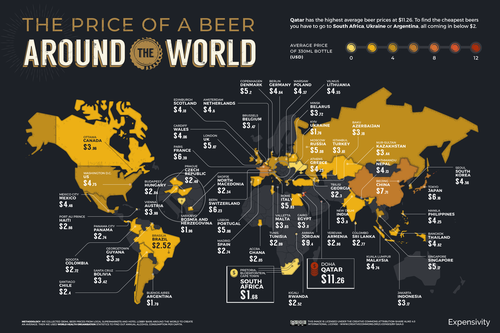 Pricey Pints: The Average Price of a Beer

Researchers calculated the average price of a typical bottle of beer (330ml, just shy of a pint) from well known brands via online stores and statistics database Numbeo. In addition, local beer prices were pulled from hotel and bar menus, and average values converted to USD.

In Qatar, you’d have to shell out $11.26 for a single beer, which would surely make for a really expensive night out on the town. In part, this is because in 2019, the Muslim-majority country introduced a 100% excise tax on top the previous sales price of all alcohol imports.

These steep prices are aimed at tourists—and with Qatar hosting the 2022 men’s soccer World Cup, there’ll be thousands of visitors in the country looking for a cold one at any price.

At just $1.68 per bottle, South Africa has the lowest average price of a beer thanks at least partially to cultural norms of buying in bulk.

Cashing In: The Per Capita Spend on Beer

The price of a single beer is one thing, but which countries spend the most on beer itself? Germany unsurprisingly tops the list here with nearly $2,000 of expenditures per capita, bolstered by its strong beer culture and annual Oktoberfest celebration.

Germany also prides itself on the purity of its beer—the vast majority of brewers follow the Reinheitsgebot, centuries-old purity laws that broadly state that beer may contain only three ingredients: water, barley, and hops. 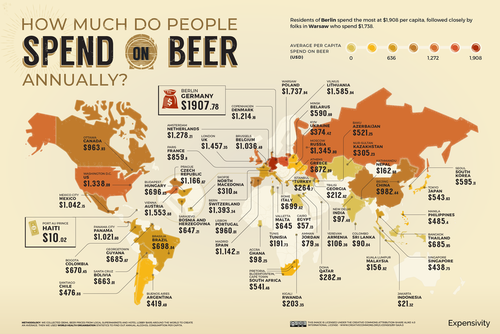 Following closely behind is Poland, which spends $1,738 per capita. Meanwhile, the U.S. ranks eighth in the world for the highest spending on beer per capita at $1,554—beer is also the country’s most popular alcoholic beverage.

Getting Boozy: How Much Beer Do People Drink?

Using data from the World Health Organization, the visualization below also digs into how much beer is consumed around the world per capita.

The Czech Republic emerges on top in this regard, with 468 beers on average in a year—that works out to 1.3 beers per day. Spain and Germany are next with 417 and 411 beers, respectively. 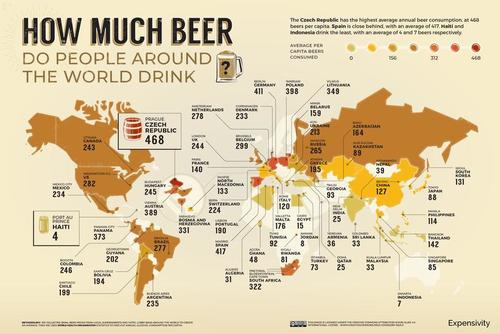 On the flip side, people in Haiti only drink about four beers yearly. This may be because they prefer something a little stronger—97% of alcohol consumption in the nation comes from spirits such as rum.

Beer has been around for over 7,000 years. No matter the price of a beer in your country, it’s worth raising a glass to the timelessness of this humble beverage.