This week, the U.S. House passed, along party lines, the $1.9 trillion American Rescue Plan Act of 2021. A vote in the U.S. Senate is expected soon. Buried within the 591-page bill is a $350 billion bailout for 50 states, tribal governments, U.S. territories, and more than 30,000 cities and counties.

Our auditors at OpenTheBooks.com finally located the $350 billion allocation, line-by-line, in a supplemental database hidden on the back end of the House Oversight Committee’s website.

We mapped the data to each of the 50 states. Click here to see how much taxpayer money Congress earmarked your hometown to receive from the COVID “relief” bill.

Congress tried to hide these line-by-line appropriations, but thanks to technology and the internet, you can search it for yourself.

Speaker Nancy Pelosi’s House Democrats changed the allocation formula from being based on population to the unemployment rate. This change caused 23 states to gain $31.9 billion and 27 states to lose that funding. The four biggest winners were Democratic strongholds: California—which reaped an extra $6.7 billion; New York—which added another $6 billion; Illinois — increased by $2.1 billion; and New Jersey — a $2 billion increase.

Since the Senate is split evenly between the two parties, Democrats can’t afford any defections if the bill is to pass.

Will the two new Democratic senators, Jon Ossoff and Raphael Warnock, from Georgia still vote for this bill even though it shifts $1.5 billion of their Georgia tax dollars to California and New York? What about Sen. Joe Machin (D-WV), whose state is losing $991 million due to the allocation change? 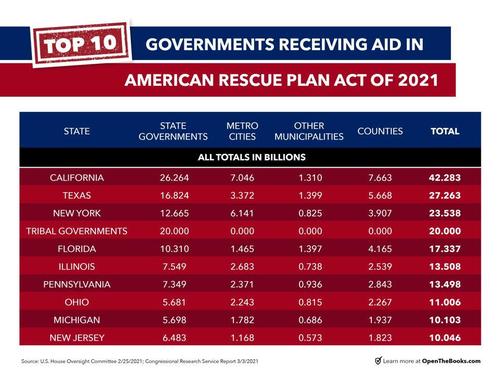 The largest cities received huge allocations of aid. For example, New York City received $4.3 billion, which is more money than 25 state governments. Chicago, with their bonds at junk status, was allocated $1.98 billion, an amount more than 12 state governments.

In fact, the 50 richest places (Bloomberg) would receive $100 million in COVID-19 bailout funds. For example, Atherton, CA, the wealthiest city in America with an average household income of $525,000, received $1.3 million from the legislation.

Hillsborough, CA, reaps $2.1 million from the bill even though it boasts a median home price of $5.8 million. Scarsdale, NY—the richest place on the East Coast—would get $2 million in “relief.”

Democrats earmarked $2 million for the richest town in Texas, Highland Park. The median home price is $1.5 million and notable residents include the owner of the Dallas Cowboys, Jerry Jones, and the Bush family.

Search your hometown on our interactive map at OpenTheBooks.com.

Congress earmarked $1 billion for the top ten richest counties across the U.S. Four of the top six are located in Virginia and Maryland, inside the Washington, D.C. beltway. They include Loudon County, VA ($80.2 million); Howard County, MD ($63.2 million); Arlington County, VA ($45 million); and Fairfax County, VA ($4.5 million). With a median income of $136,000, Loudoun County has the highest income of any U.S. county with more than 65,000 residents.

The wealthy county of Santa Clara, CA, is set to receive a whopping $385 million from the legislation. Located in the heart of Silicon Valley, the county has the highest median income of any county in California. The county seat is the city of San Jose, where the average home price tops $1 million.

Can Conservatives Stop Their Movement’s Descent Into Madness?

The Decline Of The West: American Education Surrenders To “Equity”