Ahead of today’s very disappointing ADP print, which badly missed expectations of 200K by nearly half, coming at just 117K, the whisper number was far higher, somewhere in the 300-400K range (to be expected following JPM’s latest prediction that the US will add 675K jobs per month for the next year), which in turn pushed yields sharply higher ahead of the print. 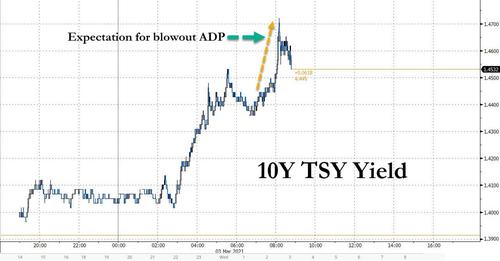 Alas it was not meant to be, and yields quickly reversed on the far worse than expected ADP report.

But while as recently as last week such a poor economic print would have been sufficient to push risk assets higher, especially with yields lower, today that was not the case, and instead futures tumbled as soon as the flashing red ADP headline hit the tape. 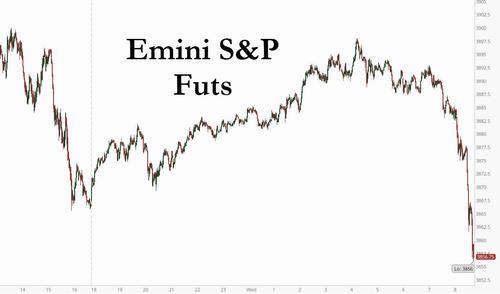 Could it be that we have transitioned away from a “bad news is good news (for markets” regime to a clear cut “bad news is bad news” and why?

One answer comes from our friends at spotgamma who remind us just how difficult it has been for the market to rise above the 3,900 level in the S&P, pointing out that “there seems to be this rather strange dynamic to markets wherein buyers stall out >3900, and light put buyers step in.”

Specifically, what happens is that markets shake out, VIX spikes and those short duration put holders close immediately which fuels a retest of 3900. Or as the put it best, “It’s as if the SPX return was simply a function of volatility spasms.”

Making matters worse, despite yesterday’s plunge in implied vol, beneath the market’s hood realized volatility remains very high especially since high beta leaders like AAPL, TSLA, and AMZN all appear to be breaking down while the S&P holds flat. Meanwhile, despite volatility of volatility being very high, downside hedging is weak at best.

Which, to Spotgamma means that “traders seem to be using puts as alpha generation mechanisms rather than hedges.”

And so, with the S&P stubbornly unable to rise above 3,900 preventing dealers from turning long gamma, the bottom line is that “positive gamma refuses to materially build around current SPX price levels, and that positive gamma that does exist requires a push up into 3950.”

As a result, with markets unable to hold the light resistance over 3900, SpotGamma’s punchline – no pun intended – is that it is growing quite concerned that markets are increasingly susceptible to a “sucker punch” and if today’s “bad news is bad news” is any indication, even a small tremor could unleash the next market puke.

What Could Go Wrong? The Fed’s Warns On Corporate Debt

For Second Week In A Row, Fed Buys Treasuries (QE4!?!)