After several disappointing payrolls reports including just +49K in January and a loss of -227k in December – which helped keep the reflation genie at bay – Friday’s jobs report is expecting to show that the pace of nonfarm payroll growth is starting pick-up in February. And while JPMorgan now expects the US to start adding 675,000 jobs every month to hits its bogey of 8 million new jobs created for the year, the labor market signals are mixed going into the report: as Newsquawk recaps…

Beyond the headline, desks are paying attention to the dynamic between the participation and wage growth; if participation continues to fall, it could buoy the wage growth metrics, but this should not be taken as a good sign, and would instead reflect the hardship low-paid workers are facing.

Finally, a blowout number will be the worst possible outcome, adding to the already mounting reflationary concerns and adding to them the possibility that the Fed will hike much sooner than expected should the unemployment rate tumble in coming months.

Looking at Goldman’s individual forecast, the bank estimates nonfarm payrolls rose 225k in February, as “above consensus of +200k.Falling infection rates and a net easing of business restrictions likely supported job growth in virus-sensitive industries.” According to the vampire squid, Big Data employment signals also indicate a pickup in job growth on net, and the severe winter storms in the South probably struck too late to significantly affect the report. At the same time, seasonal adjustment represents a two-sided source of uncertainty, as the seasonal hurdles have evolved in an increasingly unfavorable direction in recent months. Goldman also estimates an unchanged unemployment rate of 6.3%, “reflecting a solid expected rise in household employment offset by a rebound in labor force participation.”

With that said, here is what sellside expectations are currently courtesy of Newsquawk:

WAGES:  BMO’s analysts will be closely watching labor market participation as well as the average hourly earnings data. Earnings are seen rising by 0.2% m/m, although BMO says watching the composition will be key, explaining that as we continue to see struggles in the low-skill, low-wage earning sector, that will cause natural upward pressure on average hourly earnings, simply because those lower paid jobs will not factor into the equation. Therefore, if the participation rate continues to slip, and hourly earnings are reported to rise, it should not be taken as a positive sign, and instead will highlight the plight faced by low-income earners.

ADP: There were 117k private payrolls added to the US economy in February, according to ADP, short of the 177k that the Street was expecting. ADP said that the labour market continued to post a sluggish recovery across the board; large-sized companies are  increasingly feeling the effects of the pandemic, while job growth in the goods producing sector paused in the month. The report also noted that the services sector remained well below its pre-pandemic levels; however, this sector is one that will likely benefit the most over time with re-openings and increased consumer confidence. In terms of the read for Friday’s official BLS data, Pantheon  macroeconomics reminds us that the ADP data incorporates lagged official BLS payrolls data, although it is unclear how heavily these data are weighed; “The BLS estimates that private payrolls rose only 6K in January, thanks in part to seasonal adjustment problems which substantially depressed the manufacturing and construction numbers, at least,” Pantheon says, “We’re assuming  these seasonal quirks will reverse in February, so we expect the official payroll number to be stronger than ADP, but we’re pulling our estimate down to 300K from 400K.”

INITIAL JOBLESS CLAIMS: Initial jobless claims coinciding with the BLS survey window reported 841k initial jobless claims, way above the 765k the Street was expecting, and was the highest weekly figure since early December. The data revealed that claims for regular state benefits also rose by 13k to 861. However, some desks were noting that the data might have been distorted by a spike in pandemic assistance claims in Ohio, amid backlogs and fraud, perhaps blunting the signal claims provides this month. Nevertheless, Oxford Economics said that “the latest jobless claims data are consistent with the downbeat message from labour market indicators at the start of the year,” adding that “while downside risks remain, broader vaccine distribution and increased fiscal support should lead to a marked improvement in labour market trends by the spring and summer.”

BUSINESS SURVEYS: The two ISM surveys highlighted the differing fortunes for the manufacturing and services sectors (The former surprised to the upside, while the latter disappointed). Within the survey’s sub-components, the manufacturing survey saw Employment rise by 1.8 points to 54.4, the third straight month of manufacturing employment growth; ISM said that continued strong new-order levels, low customer inventories and an expanding backlog indicate potential employment strength for the rest of the first quarter, adding that for the sixth straight month, survey panellists’ comments indicate that significantly more companies are hiring or attempting to hire than those reducing labour forces. The Services ISM report, however, saw the employment sub-index slip by 2.5 points in the month to 52.7, tough remained in growth territory (above 50.0) for the second month; ISM noted that comments from respondents included: “Unable to fill vacant positions with qualified applicants” and “Need more resources to meet demand.”

CHALLENGER LAYOFFS: Data from Challenger showed that US-based employers’ planned job cuts fell to around 34.5 k from around 79.5k, which the data compiler said was the lowest monthly total since December 2019. The commentary attached was optimistic, noting that the jobs churn has come to a halt: “If healthy job creation follows, this could mean a full recovery is on the horizon, especially as companies see an end to the pandemic in sight,” though warned that “if we do not see jobs begin to return, we could be entering a stagnation cycle, potentially keeping the currently unemployed out of work longer.” But Challenger also added that there was some good news: “we are seeing a high number of hiring plans, particularly in Retail, Entertainment, and Health Care, which were hit hard due to the pandemic.”

ARGUING FOR A BETTER THAN EXPECTED REPORT: 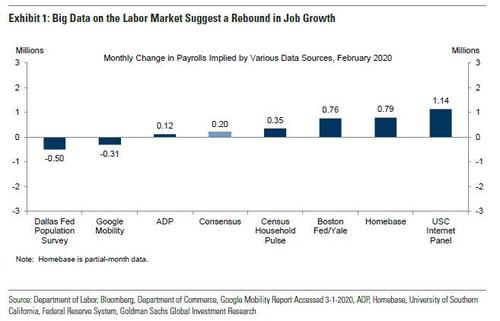 Arguing for a weaker-than-expected report: 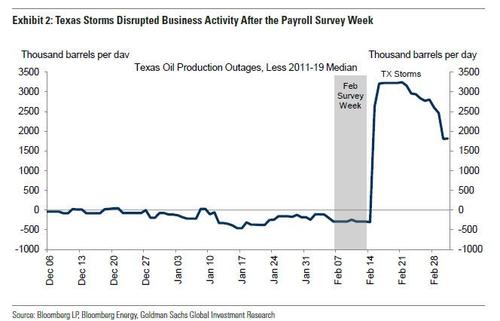 As usual, pay close attention to the number of unemployed workers on temporary layoff, which spiked to a record high 18.1mn in April, retraced to 2.75mn in January. The smaller number of workers left on temporary layoff reduces the scope for the rapid pace of gains seen in the summer, but it remains a positive factor relative to the pre-coronavirus pace of job gains. 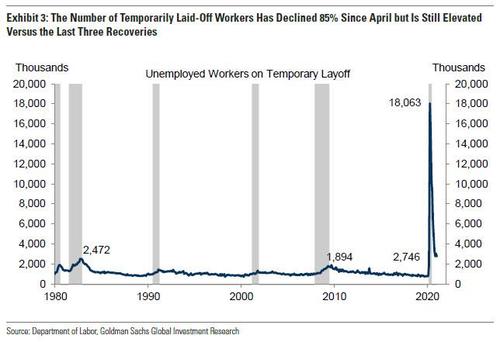 Maher: Democrats Screwed If They Run On ‘Reparations And Concentration Camps’ In 2020