As was perhaps hinted at, and discussed in detail here, The Fed has decided – likely under political pressure – to let the temporary supplementary leverage ratio changes to expire as scheduled.

The federal bank regulatory agencies today announced that the temporary change to the supplementary leverage ratio, or SLR, for depository institutions issued on May 15, 2020, will expire as scheduled on March 31, 2021.

The temporary change was made to provide flexibility for depository institutions to provide credit to households and businesses in light of the COVID-19 event.

In case you’ve been living under a rock, here’s why you should care about the SLR decision.

First, for those who missed our primer on the issue, some background from JPM.

The massive expansion of the Fed’s balance that has occurred implied an equally massive growth in bank reserves held at Federal Reserve banks. The expiration of the regulatory relief would add ~$2.1tn of leverage exposure across the 8 GSIBs. As well, TGA reduction and continued QE could add another ~$2.35tn of deposits to the system during 2021.

While the expiry of the carve-out on March 31 would not have an immediate impact on GSIBs, the continued increase in leverage assets throughout the course of the year would increase long-term debt (LTD) and preferred requirements. Here, JPM bifurcates from Goldman’s assessment: JPMorgan writes that “even the “worst” case issuance scenario as very manageable, with LTD needs of $35bn for TLAC requirements and preferred needs of $15-$20bn to maintain the industry-wide SLR at 5.6%. The constraint is greater at the bank entity, where the capacity to grow leverage exposure to be ~$765bn at 6.2% SLR.” Goldman’s take was more troubling: the bank estimated that under the continued QE regime, there would be a shortfall of some $2 trillion in reserve capacity, mainly in the form of deposits which the banks would be unable to accept as part of ongoing QE (much more in Goldman’s full take of the SLR quandary). 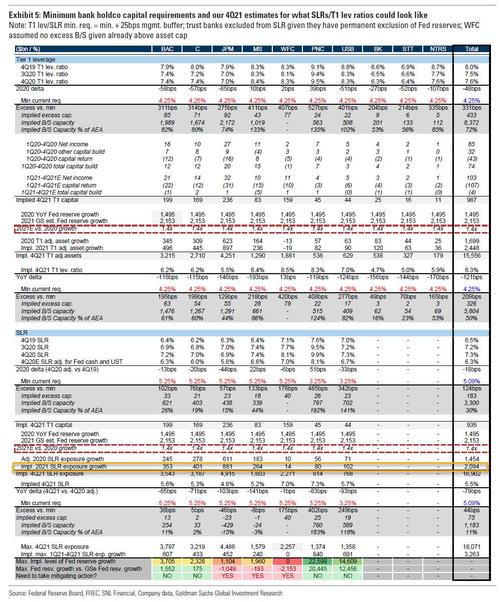 In any case, the regulatory relief granted to large US banks with regards to calculation of Leverage Exposure is scheduled to expire on March 31, and as JPM correctly notes, “the potential impacts on bank balance sheets as well as rates remain front of mind for investors.” Ultimately, JPM reaches the same conclusion as Goldman: the reinclusion of deposits at Federal Reserve banks and Treasuries would increase Leverage Exposure for the 8 GSIBs by ~$2.1tn as of 4Q’20, and keep in mind that balance sheets and deposits held at Federal Reserve banks are expected to grow further in 2021 reflecting TGA reduction and continued QE, to the tune of another $2+ trillion .

Having explained that, what happens next? While many have feared significant instability from forced deleveraging, repo guru, Zoltan Pozsar (formerly of the NY Fed and currently at Credit Suisse) most recently talked down the effects, suggesting that The Fed has been “foaming the runway” for the end of SLR exemption.

However, ending the exemption of reserves and Treasuries from the calculation of the SLR may mean that U.S. banks will turn away deposits and reserves on the margin (not Treasuries) to leave more room for market-making activities, and these flows will swell further money funds’ inflows coming from TGA drawdowns.

This – as we have explained repeatedly – is a problem.

Why I Don’t Say “OK Boomer”