Certainly one of the more exciting stories in the world of EV investing over the past several weeks has been Volkswagen. We have documented the legacy automaker’s stock during a rapid ascent over the last few trading sessions, on the heels of the company positioning itself as a direct competitor to Tesla.

The move has been part of a broader reversion to the mean in EV valuation that we think is likely to continue.

Of course, the lingering question remains: what is VW’s business actually worth, given the new pivot to EVs? Deutsche Bank weighed in early this week stating that the company’s EV business along could be worth $230 billion. 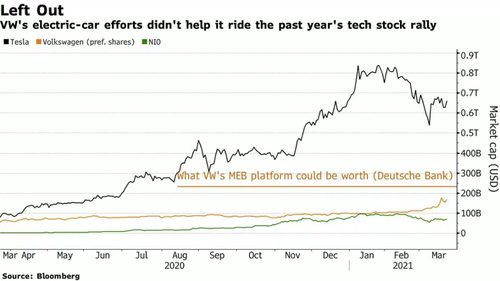 Analysts led by Tim Rokossa lifted their price target for VW shares by 46% to 270 euros, according to Yahoo Finance. The company’s stock was up as much as 14% to start the week on the news. Last week, VW surpassed SAP as the largest member of the DAX.

Rokossa said there is a “good chance VW’s EV deliveries surpass Tesla’s in short order as its ID.4 compact SUV is rolled out globally”. Meanwhile, VW has said that it plans on turning its factory outside Barcelona into an EV hub with goals of making more than 500,000 vehicles per year.

He also pointed to reduction of cost in items like batteries as key drivers of the financial bull case for VW:

“While we keep our existing valuation model, we increase the applied multiple that we think the market will deem fair and introduce a blue-sky valuation of the BEV business separately with this note. Applying the multiples of EV pure plays such as Tesla or NIO on sales generated by the MEB platform would yield a value of almost EUR400 per share (DBe) and we even ignore the premium PPE and luxury J1 platform in that calculation. We also ignore the potential value creation from a Porsche IPO (DBe: worth >EUR60bn). Overall, given the earnings momentum and the greater credibility of its EV story, we remain on Buy and increase our TP to EUR270.”

Recall, last week VW upgraded its profit guidance laid out plans for expanding the company’s EV offering out through 2030 which also includes dethroning Tesla as the reigning EV world champ. VW hosted its “Power Day” yesterday and revealed plans to build six “gigafactories” with a total capacity of 240 gigawatt hours per year.

“The company is aiming to achieve an operating margin between 7% and 8% after 2021. VOW also confirmed it is looking to finish the year at the upper and of a 5% – 6.5% range in 2021. Higher profitability will be achieved through lower costs with as much as 2 billion euros savings identified for 2023 compared to 2020,” the company said yesterday, according to StreetInsider.

Chief Executive Herbert Diess said on CNBC: “This period is probably the most crucial for the whole industry. Within the next 15 years we will see a total turnover of the industry. Electric cars are taking the lead and then software really becomes the core driver of the industry.” 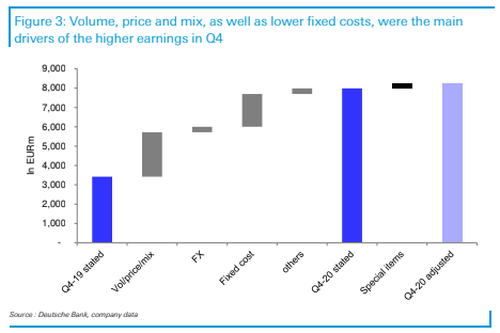 “Electric cars already today are very, very competitive and they’re becoming more competitive over time. that gives us the certainty that this is the right way going forward. Electric cars actually will bring down the cost of individual mobility further,” he continued.

VW also disclosed yesterday that it was working on a “new unified battery cell” to be launched in 2023. Diess said: “The one size fits almost all cell design will radically reduce battery costs … by up to 50% compared to today. Lower prices for batteries means more affordable cars, which makes electric vehicles more attractive for customers.”

Also probably contributing to its ascent is the fact that VW is a “less liquid” share listing, as Bloomberg notes that it is “owned by major shareholders Porsche SE, the German state of Lower Saxony and Qatar”.

The move is also part of a general hysteria surrounding EV stocks. Recall, we wrote days ago that Rob Arnott of Research Affiliates referred to it as a “big delusion”. Arnott’s predictions could eventually rope in valuations across the board in EVs, not just for any one player.

Current valuations in EVs are due to “pricing delusion”, Arnott said in a new paper calling EVs the “Big Market Delusion” last week. “The electric vehicle industry, with its astronomical growth in market-cap over the 12 months ending January 31, 2021, is a prime example of a big market delusion,” he wrote.

In his paper, he defines a big market delusion as “when all the firms in an evolving industry rise together, despite that fact that they are competing against each other.” He used airlines as an example of the BMD in the past. Technology “does not translate into great fortunes for investors unless it is associated with barriers to entry that allow a company to earn returns significantly in excess of the cost of capital for an extended period,” he argued.