The SPAC bubble sweeping across U.S. capital markets continues to catch the attention of the U.S. Securities and Exchange Commission (SEC).

Reuters reports the SEC has sent letters to top Wall Street banks about blank check acquisition schemes. The agency is inquiring how underwriters control the risks associated with taking a company public via a SPAC. The letters are requesting information voluntarily.

Sources told Reuters the letters could be a precursor to a formal investigation into SPAC mania. If one needs to be reminded amount of SPAC volumes over the last 16 months, take a look at the chart below. And the average deal size has increased since the start of the year…

…as SPACs increasingly seek to merge with larger and larger targets.

Sources also said the SEC requested information on SPAC deal fees, volumes, and internal controls banks have in place on the deals. Additionally, the agency had questions on compliance and reporting.

The SPAC structure allows startups with an easier pathway to go public with less regulatory scrutiny than the traditional IPO route. Just look at the declining number of IPO deal announcements. 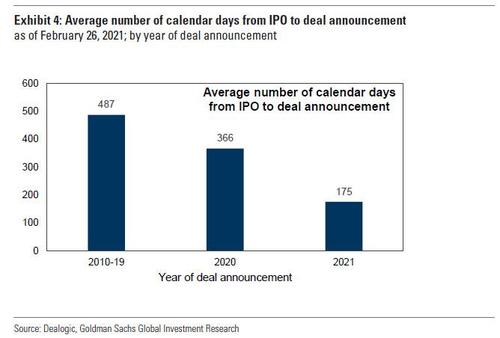 The SEC inquiry comes as the SPAC bubble has reversed, with the SPAC Index entering a bear market.

In an already saturated SPAC space, out of all companies, that being WeWork, who already failed at going public a few years back via a botched IPO, this walking zombie of a company is attempting to go public via a Shaquille O’Neal-backed SPAC.

Given that WeWork is a money-losing business, there are concerns about the limited due diligence SPACs perform before acquiring business.

… and as celebrities plaster their names all over SPAC deals, the SEC warned in early March against investors buying SPACs based on celebrity endorsements or ownership.

Another concern among the agency is the heightened risk of insider trading in SPAC deals:

“Wall Street’s biggest banks are being asked: what’s going on?” the source said.

When the SPAC bubble implodes, there’s no one else to blame but the Federal Reserve, who fueled financial markets with easy money. Maybe it’s only then when the SEC will open a formal investigation.