“Over the past week, the market didn’t make a lot of headway, as price rises were limited while intraday dips got repeatedly bought. Such is what we would expect with the ‘money flow’ indicators we have discussed over the last several weeks back on “sell signals.” (Importantly, note that Friday’s early morning decline held the uptrend line from the October lows.)”

This week was much the same story, with stocks slopping around all week. However, on Friday, a late afternoon buying surge sent the market back to all-time highs. Again, as noted, stocks haven’t made a lot of headway since the February peak despite a lot of volatility. But Powell’s promise of continue “easy money” certainly didn’t hurt.

As discussed last week, the “sell signal” triggering on a short-term basis coincides with our concerns of quarter-end rebalancing for pension funds. We discuss the confluence of the long- and short-term indicators and the market’s potential outcome in Thursday’s “3-minutes” video.

I think we saw a good bit of that rebalancing this past week and are likely close to its conclusion. As noted, the positive weekly money flows keep downside risk somewhat mitigated for now. As seen over the last two weeks, dips continue to be bought despite overall price weakness. We also see relatively rapid rotations between the defensive and offensive market sectors. As stated previously, such suggests rallies may remain limited until the subsequent “buy signals” are triggered.

I suspect we may have some additional quarter-end rebalancing risk early next week. However, buying on Thursday and Friday next week, as second-quarter positioning gets underway, would not be surprising.

As such, hold positions early next week and look for weaknesses to add to exposures as needed.

Over the last couple of months, we repeatedly discussed the market’s ongoing rise, particularly the “value” rotation, depended on continuing dollar weakness.

The recent rotation to value has been primarily a function of a “weaker dollar,” which boosts commodities. As noted, if economic growth does strengthen, leading to higher rates will attract foreign inflows into the dollar for a higher yield. Such also undermines corporate profitability, given that roughly 40% of corporate profits are from abroad.

The dollar has been gaining strength this year on expectations of more robust economic growth. A break above the 200-dma could accelerate buying as shorts begin to cover their positions.

The risk not factored into the current “value” trade is the inflation and interest rate increase due to the massive amounts of stimulus. However, that stimulus will quickly flow through the system, leaving consumers tapped by higher inflation and rates eroding disposable income.

In other words, the “value trade” could be just a fleeting as the “economic recovery” itself.

We are firm believers in “value investing.”  However, after years of artificial interventions, accounting gimmicks, share buybacks, and massive balance sheet leveraging, there is little “real” value in the markets currently.

Given that the markets have not been allowed to reset, speculators are now simply chasing the next “momentum” trade called “value.”

“The U.S. economy is heading for its strongest growth in nearly 40 years, the Federal Reserve said on Wednesday, and central bank policymakers are pledging to keep their foot on the gas despite an expected surge of inflation.” – Reuters

In other words, despite the Fed’s mandate of maximum employment and price stability, the Fed is opting to let things run ‘hot’ for some time to ensure that growth is ‘sticky.’” That stance makes some sense, given the economy still requires massive liquidity support more than a decade after the financial crisis. As discussed previously in ‘Forever Stimulus:’

‘What this equates to is more than $12 of liquidity for each $1 of economic growth.’” 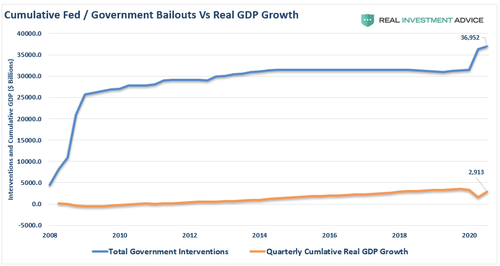 The question that financial markets wanted answering was just how much of a decline in asset prices the Fed will tolerate before providing reassurance.

It only took a 3% clip off of all-time highs before there was a scramble by Fed members to assuage market concerns. My colleague, Mish Shedlock, put together an excellent summary:

Not surprisingly, the Fed is very cautious about the financial markets due to its inherent impact on consumer confidence. However, at this juncture, with rates at zero, stimulus checks in the mail, and QE running $120 billion per month, verbal support is all they can do currently.

“The Fed’s 2% inflation target is monetary insanity. Full speed ahead with the stimulus in search of inflation that would be visible to anyone who was not wearing groupthink blinders. Japan has tried what the Fed is doing now for over a decade, with no results.”

He is correct. The Fed’s “inflation policy” will likely backfire on them badly. As discussed previously in “Japanification:”

“The U.S., like Japan, is caught in an ongoing ‘liquidity trap’ where maintaining ultra-low interest rates are the key to sustaining an economic pulse. The unintended consequence of such actions, as we are witnessing in the U.S. currently, is the battle with deflationary pressures. The lower interest rates go – the less economic return that can be generated. An ultra-low interest rate environment, contrary to mainstream thought, has a negative impact on making productive investments, and risk begins to outweigh the potential return.”

As my colleague Doug Kass noted, Japan is a template of the fragility of global economic growth.

“The bigger picture takeaway the fact that financial engineering does not help an economy, it probably hurts it. If it helped, after mega-doses of the stuff in every imaginable form, the Japanese economy would be humming. But the Japanese economy is doing the opposite. Japan tried to substitute monetary policy for sound fiscal and economic policy. And the result is terrible.”

I agree with Doug, as does the data, that while financial engineering props up asset prices, it does nothing for an economy over the medium to longer-term. It actually has negative consequences.

Two weeks ago, I addressed the “Money On The Sidelines” myth stating:

“No, this is not the ‘cash on the sidelines’ argument which I debunked previously. Following the pandemic, corporations drew down credit lines and hoarded cash due to economic uncertainty. Now, with expectations of recovery, corporations are once again beginning to deploy that cash.” 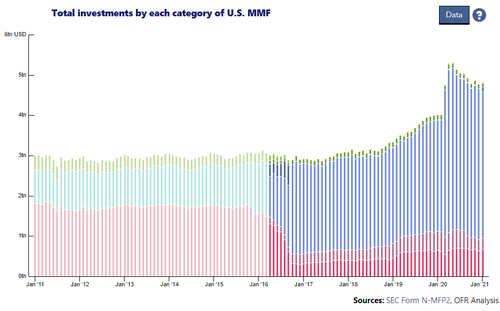 As I stated then, while the mainstream media hope is all this cash will be flowing back into the economy, the reality is that it will primarily go to stock buybacks. Again, while not necessarily bad, it is the “least best” use of the company’s cash. Instead of expanding production, increasing sales, acquiring competitors, or making capital investments, the money gets used for a one-time boost to earnings on a per-share basis.

This past week, share buybacks hit a new record.

Not surprisingly, the most prominent players in buybacks are the ones that need to subsidize their earnings the most to beat estimates; technology and financials.

While share buybacks primarily are for the benefit of corporate insiders “cashing out,” it does have the effect of supporting asset prices as well. As I discussed in 2019, when stocks were hitting records amid record share repurchases:

“What is clear, is that the misuse, and abuse, of share buybacks to manipulate earnings and reward insiders has become problematic. As John Authers recently pointed out:

‘For much of the last decade, companies buying their own shares have accounted for all net purchases. The total amount of stock bought back by companies since the 2008 crisis even exceeds the Federal Reserve’s spending on buying bonds over the same period as part of quantitative easing. Both pushed up asset prices.’

In other words, between the Federal Reserve injecting a massive amount of liquidity into the financial markets, and corporations buying back their own shares, there have been effectively no other real buyers in the market.”

I bring this up for two reasons:

While Janet Yellen is okay with the buybacks, as she thinks the banks are healthier now, why doesn’t anyone ask the question:

“If banks are so healthy, why do they need a constant monetary stimulus to remain in business and a bailout every time the economy declines?”

It doesn’t sound very healthy to me.

As noted above, with the “money flow” indicators now negative on both a daily and weekly basis, we are currently holding much higher levels of cash. Last week, we also added a bit of “duration” to our bond portfolio by stepping into TLT to add a hedge against a potential pickup in volatility short-term.

With the market now about 1/3rd of the way through the correction cycle, there is limited downside risk currently as we remain in the year’s seasonally strong period. However, such doesn’t mean we can’t have a lot of volatility in the meantime.

We remain wary of the rise in yields, and ultimately the dollar, which remains the key to the current market cycle. As discussed last week, the “value trade,” which had become excessively overbought, corrected in earnest this past week. While we may see some “bottom-fishing” in the short-term, there is still substantially more room for a correction given the extension from long-term means.

Our more significant concern over the next quarter is the extremely high net positioning of institutions in the markets. Historically, “everyone is in the pool,” outcomes have not been all that pleasant. While we continue to remain allocated toward equity risk currently, we do it with a constant eye on the risk. We suspect that we could see a fairly substantial correction during the summer.

But that is a story we will discuss when we get there.

Continue to manage risk until we start to see “buy signals” across our indicators once again.