California Rep. Maxine Waters (D-CA) flew to Minnesota this weekend, where she joined protesters in Brooklyn Center past curfew and urged them to ‘get more confrontational’ just one day after peaceful demonstrations devolved into violence. 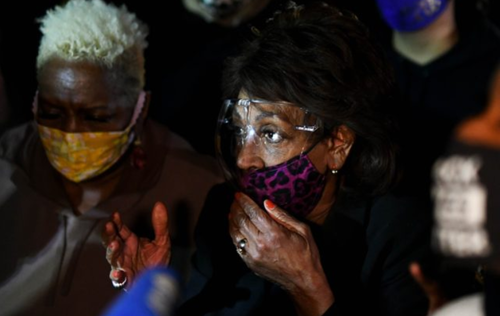 “[Protestors] got to stay on the street and get more active, more confrontational. They’ve got to know that we mean business,” said Waters.

“I am not happy that we have talked about police reform for so long,” she continued, adding “We’re looking for a guilty verdict” in regards to former police officer Derek Chauvin, who is on trial for the death of George Floyd, a black man who died while in police custody last year. “And we’re looking to see if all of the talk that took place and has been taking place after they saw what happened to George Floyd, if nothing does not happen, then we know that we’ve got to not only stay in the street, but we’ve got to fight for justice.”

“We gotta stay on the street” Waters was recorded saying, according to the Daily Mail.

Maxine Waters is marching in Brooklyn Center tonight and told people to take to the streets if Chauvin is acquitted pic.twitter.com/RemfvCCLAn

Waters is essentially calling for protests even if Chauvin is convicted on all charges.

.@RepMaxineWaters from California is here in front of Brooklyn Center Police Department. Swarmed with cameras pic.twitter.com/jbVi437keH

Several protesters were arrested late Saturday following Waters’ comments, after what the Washington Post described as a “volatile skirmish between police and protesters” involving around 100 people.

Meanwhile more from the Daily Mail.

Waters is planning on staying in town until Monday.

According to CBS Minnesota, officials stated that there was a brief altercation between reporters and proresters as Waters was leaving on Saturday, the first reports of any skirmishes.

The protesters stood outside of Orput’s home before marching through is neighborhood in Stillwater.

Maxine Waters traveled across state lines to incite a riot

Protesters have taken to the streets across the country surrounding the Chauvin trial, as well as the death of 13-year-old Adam Toledo, who was shot by a white Chicago police officer less than a second after the youth dropped a handgun..

On Friday night, clashes broke out between Black Lives Matter protesters and the police – after which Waters came out and encouraged followers to stay in the streets.

In 2018, Waters encouraged followers to publicly confront and harass members of the Trump administration.

A Labor Day Satire: The Cultural Appropriation Of May Day

“We Are Experiencing Issues With Trading”: Robinhood Is Down Again