This forecast for a flood of liquidity emanating from the Treasury prompted us (and subsequently others) to predict that as a result of the “mind-boggling liquidity” of just under $1 trillion in cash set to be unleashed by the Biden admin, stocks would soar as the Treasury’s monetary injection would be far bigger than the $120BN in liquidity injected by the Fed every month.

According to the Treasury, during the January – March 2021 quarter, Treasury borrowed $401 billion in privately-held net marketable debt – $126 billion more than the $274 billion originally forecast – and ended the quarter with a cash balance of $1.122 trillion, some $322 trillion more than the $800 billion it had forecast back in February (red arrow below), although as shown in the chart below, the actual TGA cash balance is indeed sliding fast, if not quite as fast as expected three months ago. 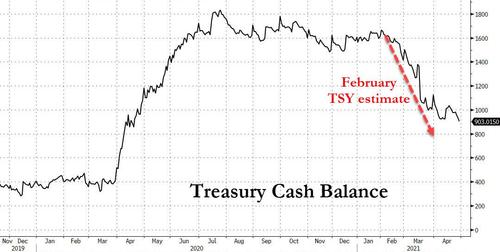 According to the Treasury, the $126 billion increase in borrowing resulted primarily from the increase in the end-of-March cash balance somewhat offset by lower net expenditures.

So what does the Treasury expect will happen in the current and coming quarter? Here is the summary from the latest Sources and Uses:

In summary, instead of dropping by $929BN through March 31 as it had expected in February, the Treasury cash balance declined by “only” $607BN, a difference of $322BN. And in the current quarter, the Treasury now expects a similar decline in cash as last quarter, a drop of $322BN (vs $300BN previously), although since it is starting from a higher base, the June 30 cash balance will be $800BN instead of $500BN. This is summarized in the table below:

Finally, here is the full Sources and Uses Reconciliation, showing changes to not only cash, but financing needs and actual debt balances.

We will have more to say on this in a subsequent post, but for now the TL/DR is that the liquidity tsunami is over, and the Treasury now expects to release just $100BN in cash for the next two months, from the $903BN currently to $800BN at the end of June, and then just another $50BN lower three months later, or $750BN at the end of Sept.

This slowdown in the Treasury’s cash injection, together with the possible announcement of a QE taper some time around the June FOMC meeting, means that the market melt up is about to end with a bang as investors start freaking out about the risk of a hard liquidity stop – one without the liquidity buffer of Treasury cash injections – some time in mid/late-summer and start frontrunning said event.

Boris Johnson Must Decide Between Washington And Beijing