Once upon a time the Bank of America Fund Manager Survey served a useful indicator of what finance professionals did and thought. Then, over the years, it became a survey which revealed what the prevailing consensus narrative was  – if not what respondents actually did – as survey participants merely answered question in line with what they thought was the right answer. Unfortunately, since then it has devolved further to the point where it is mostly noise with very little signal.

Take the latest Fund Manager Survey (FMS) released today by BofA’s Michael Hartnett, which took place between May 7 and 13, and polled 2216 participants with $625bn AUM. While we will have a more indepth take on the findings of the latest FMS, one thing stuck out: the question what is “the most crowded trade” where there was a material change.

After several months when the dominant answer to this question was “Long Tech”, the prevailing response was “Long Bitcoin“… 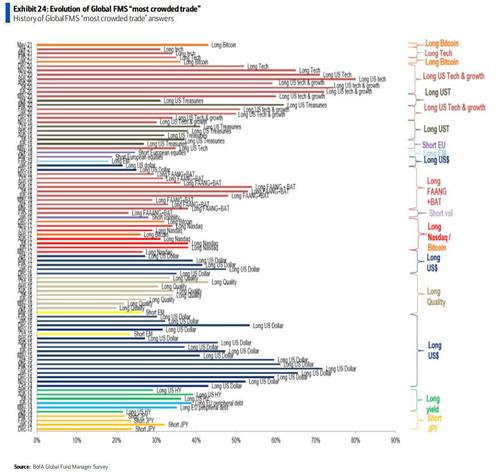 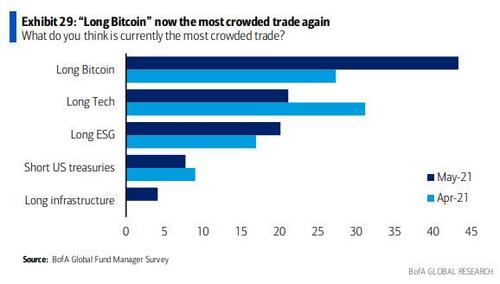 Why was this response odd? Well, a few reasons: while Wall Street is not limited in its exposure to virtually any other asset class, when it comes to bitcoin almost no firms are permitted to own bitcoin outright for regulatory reasons, and while few specialized firms are long bitcoin futures – which remain highly illiquid – the GBTC, or Grayscale Bitcoin Trust (not an ETF but rather an open-ended grantor trust) is widely viewed and used as the only vehicle to express a bullish (or bearish) position in bitcoin since the SEC has yet to greenlight a bitcoin ETF.

Meanwhile, on the buyside, with a handful of notable exceptions such as billionaire Mike Novogratz’ Galaxy Digital who has been involved in the space for years, or Michael Green One River (which in late 2020 famously disclosed a major Bitcoin and Ethereum stake to the shock of his peers), most other major funds are either on the sidelines or only now starting to tiptoe into the crypto space (like Dan Loeb, Steve Cohen, and soon, Ray Dalio).

Here’s the issue: with bitcoin trading at roughly $43,000, having a market cap just shy over $800 billion, the market cap of GBTC is a tiny $23.8 billion, or less than 3% of the value of the underlying. In other words, there is physically no way that Wall Street can pile into bitcoin using conventional instruments. Furthermore, while one could have argued that there was an institutional pile up into GBTC for much of Q1, making that claim now is absurd as the GBTC Trust is trading at a near record discount to NAV of almost $10,000, which is clearly indicative of institutional flight from this particular asset class. 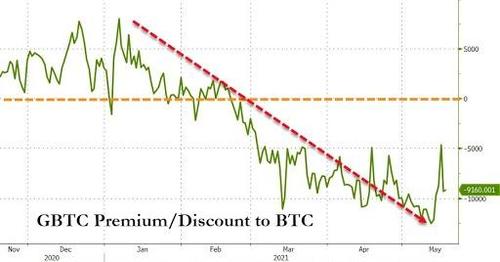 Of course, Wall Street pros would know this if they were actually involved in bitcoin.

What about futures? Well, according to the latest (record) open interest there is a whopping…. $1.9BN in bitcoin futs open interest, down from a record record high of $3BN (as gold open interest is rising). 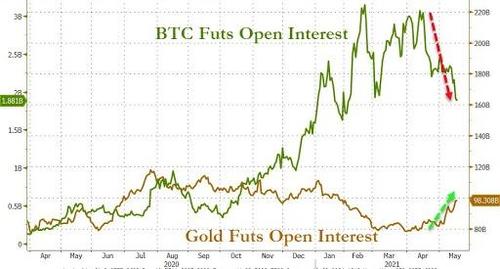 In other words, bitcoin may be the “most crowded trade” in the imaginations of Wall Street professionals – perhaps due to its tremendous ascent, mostly driven by whale and retail participation – but it certainly is not the most crowded street on Wall Street, where simply as a result of the limited array of assets available to Wall Street to go long (or short) bitcoin, the true level of exposure is a tiny fraction compared to other far more crowded positions.

So what’s really going on? It appears that this is just the latest case of Wall Street projecting, jealous of 16-year-old Robinhooders (especially those who recently purchased lambos) who truly are long cryptos, even as most professionals refuse to chase the cryptocurrency ever higher while piling into such bubble names as Tesla. 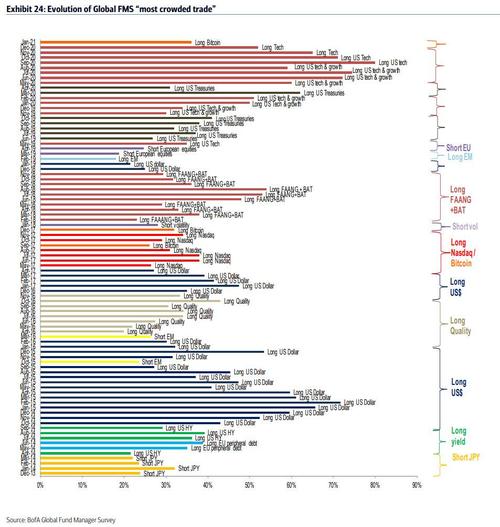 It then proceeded to quickly double even as Wall Street “professionals” quickly lost interest and decided that Long Tech was once again the most crowded trade even as bitcoin soared to new highs month after month.