Do Democrats Realize They Need Republican Support To Legalize Marijuana? 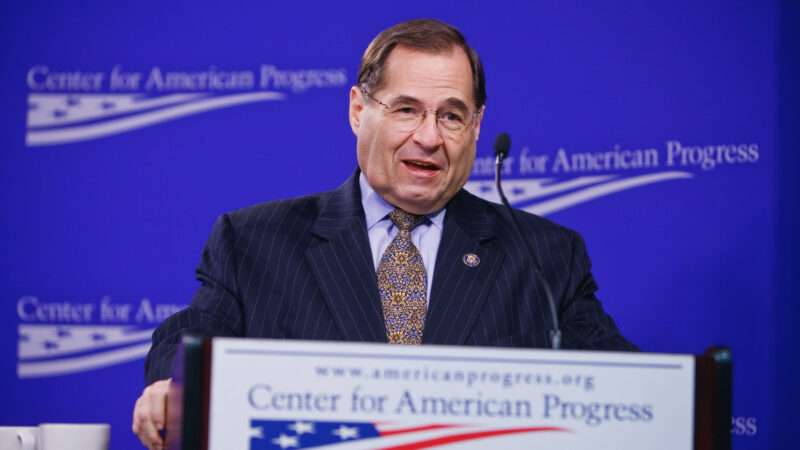 The House of Representatives made history last December by approving a bill that would have repealed the federal ban on marijuana—the first such measure to win approval from either chamber of Congress. House Judiciary Committee Chairman Jerrold Nadler (D–N.Y.) today reintroduced that bill, and Senate Majority Leader Chuck Schumer (D–N.Y.) plans to sponsor similar legislation soon.

A recent Quinnipiac University poll found that 69 percent of Americans, including 78 percent of Democrats and 62 percent of Republicans, support marijuana legalization. But with the Senate evenly split between Democrats and Republicans, the prospects for Nadler’s bill are dim, especially because it is loaded with contentious provisions that go far beyond legalizing marijuana. And even if Democrats could win over enough Republican senators to avoid a filibuster, it is not at all clear that President Joe Biden, who still favors maintaining the federal ban, would be inclined to sign a bill that eliminates it.

The approach Democrats are taking makes little sense if their main priority is building a bipartisan coalition in favor of legalization. Nadler’s bill, the Marijuana Opportunity Reinvestment and Expungement (MORE) Act, includes several elements that are bound to raise objections from Republicans who might otherwise be inclined to support legalization, if only to resolve the untenable conflict between the Controlled Substances Act (CSA) and the laws of the 36 states that have legalized marijuana for medical or recreational use.

The Respect State Marijuana Laws Act, which former Rep. Dana Rohrabacher (R–Calif.) first introduced in 2013, consisted of a single sentence that would have made the federal ban on marijuana inapplicable to people acting in compliance with state law. A bill that simply removed marijuana from the CSA’s schedules of controlled substances would likewise be consistent with federalism, and it would be similarly brief. The MORE Act, by contrast, is 87 pages long.

Section 3, which addresses “decriminalization of cannabis,” decontrols marijuana and amends various federal laws to conform with that change. That takes nine pages.

What does the rest of the bill do? Some of the provisions are unobjectionable. The MORE Act specifies, for example, that cannabis offenses do not disqualify people from receiving federal benefits and will not figure in immigration enforcement. It creates an expungement and resentencing process for marijuana offenders—an important ameliorative step that was too often neglected by early state legalization measures. But the bill also includes a bunch of provisions that are more controversial.

The MORE Act imposes a 5 percent federal excise tax on cannabis products, rising to 8 percent after four years. That’s in addition to the often hefty taxes collected by state and local governments, which include special marijuana levies as well as standard sales taxes. The bill also requires marijuana suppliers to pay an annual “occupational tax,” obtain federal permits, report information to the Treasury Department, and comply with packaging, labeling, and storage regulations. The tax and regulatory provisions, including civil and criminal penalties for violating them, consume 45 pages.

The MORE Act uses revenue from the excise tax to fund a “Community Reinvestment Grant Program” aimed at subsidizing “services for individuals adversely impacted by the War on Drugs,” including job training, reentry services, legal aid, literacy programs, youth recreation and mentoring programs, and health education. The revenue also would be used to pay for “substance use disorder services” and to create a “Cannabis Opportunity Program” that would provide loans to small marijuana businesses owned by “socially and economically disadvantaged individuals.”

Another grant program would help state and local governments “develop and implement equitable cannabis licensing programs that minimize barriers to cannabis licensing and employment for individuals adversely impacted by the War on Drugs.” To be eligible for those grants, applicants would have to create automatic expungement programs for people convicted of state cannabis offenses.

“The House has the opportunity to double down on its commitment to justice and economic recovery this year by taking up the MORE Act immediately and continuing the robust debate on how to best end the disastrous federal war on cannabis,” says Aaron Smith, CEO of the National Cannabis Industry Association. “Given the rapidly growing number of states with legal cannabis markets and the steadily increasing support from voters across the political spectrum, we expect there could be even more support for ending the failed federal prohibition in this session.”

But to reach a decisive level of support, Democrats will need help from Republicans in the Senate. The MORE Act makes you wonder whether they realize that. Are they actually trying to end the federal war on weed, or are they just trying to make a statement and score political points?

When the House approved the MORE Act in December, just five Republicans joined 222 Democrats and one Libertarian (now-former Michigan Rep. Justin Amash) in voting for the bill. The Senate version, which was sponsored by then-Sen. Kamala Harris (D–Calif.), went nowhere. Now that Democrats are in charge of the Senate, a legalization bill will get a hearing, but it still will need the support of at least 10 Republicans to get a vote. A streamlined bill without all the new taxes, regulations, and spending programs would have a better chance of overcoming that barrier.

Even if that happened, it is not clear that Biden would be willing to support anything like the bill that his vice president backed last year. When a reporter asked White House Press Secretary Jen Psaki during a press briefing last month whether Biden would sign a legalization bill, she reiterated his support for several modest marijuana reforms. Pressed to explicitly say whether Biden would sign a bill like the MORE Act, Psaki replied, “I just have outlined what his position is, which isn’t the same as what the House and Senate have proposed.”