By Greg Miller of FreightWaves,

The extreme consolidation within the container liner sector is the kind of thing owners of tankers and bulk carriers can only dream of. The latest data from Alphaliner highlights the extent of liner consolidation, how soon the rankings will change, and how newbuilding orders will render the carrier arena even more concentrated than it already is. 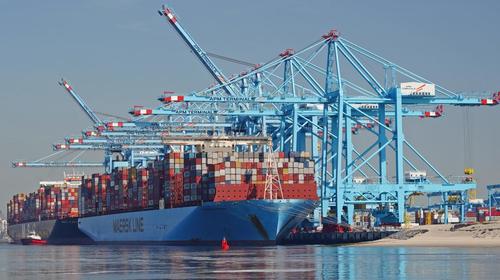 The top 10 carriers now operate 85% of global shipping capacity. Four groups — Maersk, MSC, CMA CGM and COSCO — control more than half of capacity (58%). The top seven, including Hapag-Lloyd, ONE and Evergreen, control 78%.

This base level of fleet concentration is then greatly enhanced by the existence of three vessel-sharing alliances on the mainline East-West trades — 2M, the Ocean Alliance and THE Alliance — which count nine of the top 10 liner groups as members.

The big mover at the top end of the liner rankings is MSC. The Switzerland-based carrier has been extremely active in the secondhand market, purchasing 49 vessels since August. It has also been busy in the charter market and very active in the newbuild market.

Including three secondhand ships it recently acquired, MSC just passed the 4 million-TEU (twenty-foot-equivalent unit) fleet milestone. Alphaliner noted that MSC’s fleet has increased 4% from the beginning of this year alone.

Including newbuilds on order, MSC effectively surpassed Maersk months ago to become the world’s largest carrier. Even in terms of ships on the water, it will take the crown soon. “The takeover could even happen before the end of the year, as MSC is to take delivery of four more 23,656-TEU ‘megamax’ newbuildings in the coming months,” said Alphaliner.

When all newbuildings on order are delivered, MSC will pull far ahead of the pack. Although the sum of on-the-water tonnage and newbuild tonnage is not equivalent to future capacity (because there can be more orders in the interim, and ships can go on and off charter, be bought, sold, or scrapped), it does provide an indicator of future rankings.

Maersk has the least on order of all the larger liner companies, with newbuild capacity of just 0.9% of on-the-water capacity. In sharp contrast, MSC’s orderbook is 18% of its operating fleet, according to Alphaliner data. The combined tonnage of existing ships and newbuilds for MSC is 4,742,400 TEUs, 14% and 34% above the same calculation for Maersk and CMA CGM, respectively.

Beyond the “who has the biggest fleet” contest between Maersk and MSC, the broader and more important story is that the world’s top few carriers will be the overwhelming recipients of the new tonnage arriving in 2023-24 that was ordered starting in Q4 2020.

Among the other top players, the orderbook-to-fleet ratio of Wan Hai is 56%, Evergreen 50%, ZIM 37%, CMA CGM and Yang Ming 18%, ONE 17%, and COSCO 9%. These percentages will increase further as newbuilds ordered by non-operating owners are identified with their charterers over time.

A portion of this new capacity is replacement tonnage for older vessels, yet the newbuilding data implies that the top 10 liners’ capacity control will climb from its current 85% level in the direction of the 90s.