Ivermectin: Can a Drug Be “Right-Wing”?

Ivermectin: Can a Drug Be “Right-Wing”? 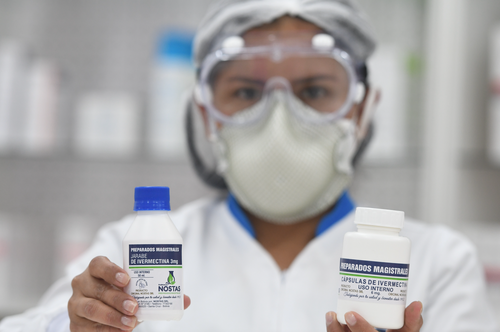 On December 31st of last year, an 80 year-old Buffalo-area woman named Judith Smentkiewicz fell ill with Covid-19. She was rushed by ambulance to Millard Fillmore Suburban Hospital in Williamsville, New York, where she was put on a ventilator. Her son Michael and his wife flew up from Georgia, and were given grim news. Judith, doctors said, had a 20% chance at survival, and even if she made it, she’d be on a ventilator for a month.

As December passed into the New Year, Judith’s health declined. Her family members, increasingly desperate, had been doing what people in the Internet age do, Googling in search of potential treatments. They saw stories about the anti-parasitic drug ivermectin, learning among other things that a pulmonologist named Pierre Kory had just testified before the Senate that the drug had a “miraculous” impact on Covid-19 patients. The family pressured doctors at the hospital to give Judith the drug. The hospital initially complied, administering one dose on January 2nd. According to her family’s court testimony, a dramatic change in her condition ensued.

“In less than 48 hours, my mother was taken off the ventilator, transferred out of the Intensive Care Unit, sitting up on her own and communicating,” the patient’s daughter Michelle Kulbacki told a court.

After the reported change in Judith’s condition, the hospital backtracked and refused to administer more. Frustrated, the family turned on January 7th to a local lawyer named Ralph Lorigo. A commercial litigator and head of what he calls a “typical suburban practice,” with seven lawyers engaged in everything from matrimonial to estate work, Lorigo assigned one of his attorneys to review materials given to them by the family, which included Kory’s Senate testimony. The associate showed Lorigo himself the the material next morning.

“I was so convinced by what Dr. Kory was saying,” Lorigo says. “I saw the passion and the belief.”

Lorigo immediately sued the hospital, filing to State Supreme Court to force the facility to treat according to the family’s wishes. Judge Henry J. Nowak sided with the Smentkiewiczes, signing an order that Lorigo and one of his attorneys served themselves, and after a series of quasi-absurd dramas that included the hospital refusing to let the Smentkiewicz family physician phone in the prescription — “the doctor actually had to drive to the hospital,” Lorigo says — Judith went back on ivermectin.

“She was out of that hospital in six days,” Lorigo says. After a month of rehab, his octogenarian client went back to her life, which involved working five days a week (she still cleans houses). Her story, complete with photo, was told in the Buffalo News, causing Lorigo’s phone to begin ringing off the hook. Doppleganger cases soon began dotting the map all over the country.

One of the first was in nearby Rochester, New York, where the family of Glenna Dickinson went through an almost exactly similar narrative to the Smentkiewiczes: they read about ivermectin, got a family doctor to prescribe it, saw improvement, only to later have the hospital refuse treatment. Again Lorigo intervened, again a judge ordered the hospital to treat, again the patient recovered and was discharged.

Hospitals fought hard, hiring expensive law firms, at times going to extraordinary lengths to refuse treatment even with dying patients who’d exhausted all other options. At Edward-Elmhurst hospital in Chicago, a 68 year-old named Nurije Fype was admitted, put on a ventilator, and again, as all other treatments failed, her family got a judge to order the use of ivermectin. Lorigo claims the hospital initially refused to obey the court order, which led to the filing of a contempt motion, which in turn led to a pair of counter-motions and another confrontation before another befuddled Judge named James Orel.

“Why wouldn’t this be tried if she’s not improving?” the Chicago Tribune quoted Orel as saying. “Why does the hospital object to providing this medication?”

“He basically said, ‘What do you have left?’” Lorigo recounts. “No one would administer the ivermectin. It’s as safe as aspirin, for Christ’s sake. It’s been given out 3.7 billion times. I couldn’t understand it.”

Stories like these aren’t proof the drug works. They don’t even really rise to the level of evidence. People recover from diseases all the time, and it doesn’t mean any particular treatment was responsible. Short of the gold standard of randomized controlled trials, there’s no proof.

However, anecdotes have a power all their own, and in the Internet age, ones like these spread quickly. Lorigo estimates he now gets “10, 15, 20” calls and emails a day. At this level, at the bedside of a single Covid-19 patient who’s already received the full official treatment protocol and is failing anyway, the decision to administer a drug like ivermectin, or fluvoxamine, or hydroxychloroquine, or any of a dozen other experimental treatments, seems like a no-brainer. Nothing else has worked, the patient is dying, why not?

Telescope out a little further, however, and the ivermectin debate becomes more complicated, reaching into a series of thorny controversies, some ridiculous, some quite serious.

The ridiculous side involves the front end of Lorigo’s story, the same story detailed on this site last week: the censorship of ivermectin news that, no matter what one thinks about the evidence for or against, is clearly in the public interest.

Anyone running a basic internet search on the topic will get a jumble of confusing results. YouTube’s policies are beyond uneven. It’s been aggressive in taking down videos containing interviews with people like Kory and doling out strikes to independent media figures like Bret Weinstein, but an interview with Lorigo on TrialSite News containing basically all of the same information is still up, as are clips from a just-taped episode of the Joe Rogan Experience that feature both Weinstein and Kory. Moreover, all sorts of statements at least as provocative as Kory’s “miraculous” formulation in the Senate still litter the Internet, many in reputable research journals. Take, for instance, this passage from the March issue of the Japanese Journal of Antibiotics:

When the effectiveness of ivermectin for the COVID-19 pandemic is confirmed with the cooperation of researchers around the world and its clinical use is achieved on a global scale, it could prove to be of great benefit to humanity. It may even turn out to be comparable to the benefits achieved from the discovery of penicillin…

There clearly is not evidence that ivermectin is the next penicillin, at least as far as its effects on Covid-19. As is noted in nearly every mainstream story about the subject, the WHO has advised against its use pending further study, there have been randomized studies showing it to be ineffective in speeding recovery, and the drug’s original manufacturer, Merck, has said there’s no “meaningful evidence” of efficacy for Covid-19 patients. However, it’s also patently untrue, as is frequently asserted, that there’s no evidence that the drug might be effective.

This past week, for instance, Oxford University announced it was launching a large-scale clinical trial. The study has already recruited more than 5,000 volunteers, and its announcement says what little is known to be true: that “small pilot studies show that early administration with ivermectin can reduce viral load and the duration of symptoms in some patients with mild COVID-19,” that it’s “a well-known medicine with a good safety profile,” and “because of the early promising results in some studies, it is already being widely used to treat COVID-19 in several countries.”

The Oxford text also says “there is little evidence from large-scale randomized controlled trials to demonstrate that it can speed up recovery from the illness or reduce hospital admission.” But to a person who might have a family member suffering from the disease, just the information about “early promising results” would probably be enough to inspire demands for a prescription, which might be the problem, of course. Unless someone was looking for that information, they likely wouldn’t find it, as mainstream news even of the Oxford study has been effectively limited to a pair of Bloomberg and Forbes stories.

Ivermectin has suffered the same fate as thousands of other news topics since Donald Trump first announced his run for the presidency nearly six years ago, cleaved in two to inhabit separate factual universes for left and right audiences. Repurposed drugs generally have had a hard time being taken seriously since Trump announced he was on hydroxychloroquine last year, and ivermectin clearly also suffers from its association with Republican Senators like Ron Johnson. Still, the drug’s publicity issues go beyond the taint of “conservative” news.

The drug has become a test case for a controversy that’s long been building in health care, about how much input patients should have in their own treatment. Well before Covid-19, the medical profession was thrust into a revolution in patient information, inspired by a combination of Google and new patients’ rights laws.

Should people on their deathbeds be allowed to try anything to save themselves? That seems like an easy question to answer. Should the entire world be allowed to practice self-care on a grand scale? That’s a different issue. Some would say absolutely not, while others would say the corruption of pharmaceutical companies and the medical system unfortunately make it a necessity. The world is increasingly divided along this trust/untrust axis.

This is an excerpt from today’s subscriber-only post. To read the entire article and get full access to the archives, you can subscribe for $5 a month or $50 a year.