Betting On The Everything Bubble: Governments Worldwide Are Testing The New Limits Of Debt

Betting On The Everything Bubble: Governments Worldwide Are Testing The New Limits Of Debt

There’s nothing quite like being an observer of what is likely going to be one of the most important case studies in monetary policy and global economics in textbooks some years from now: the everything bubble.

Among those taking stock of just how far countries around the globe have “pushed it” with the amount of debt they have taken on is the Wall Street Journal, who wrote this week about how the pandemic has inflated the everything bubble further than anyone could have imagined.

Those advocating for the debt say it could usher in global growth. Those opposing it make the obvious case that eventually the laws of economics will get the best of things and we’ll have to ‘pay the piper’.

Highlighting just how much we’re pushing it, the report notes that the U.S. government is on course for a budget deficit of $3 trillion for the second year in a row and that Japan’s central-government debt is about to surpass a quadrillion yen, or about $10 trillion. Japan’s inflation has stayed at zero despite $800 billion in economic stimulus as a response to Covid.

Worldwide government debt is up to 105% of GDP as of 2020. Prior to the pandemic, this number stood at 88%. The IIF predicts that this worldwide debt could rise by another $10 trillion this year, to reach $92 trillion.

Even countries like Greece – not far removed from almost being forced out of the Eurozone due to its debt – are pushing limits again. Former Italian finance minister Pier Carlo Padoan said: “The change is that there is no obvious ‘sinner’. After the financial crisis, there was a blame game. Covid was an exogenous shock. A huge policy response was necessary.” 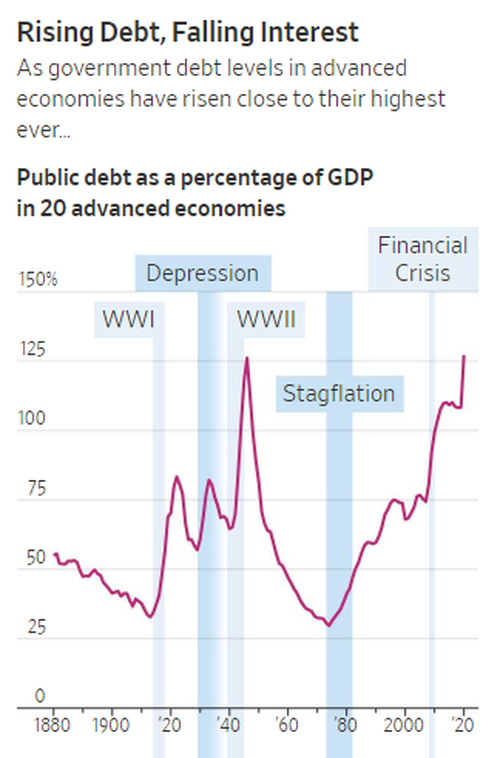 Not unlike an addict, the higher inflation goes, the more inexpensive government debt eventually becomes to pay back. The lower rates go (and stay), the higher the incentive to keep taking on debt.

While most of the world adopts this careless strategy, countries like China and oil producing countries in the Middle East have been adding to their savings by running trade surpluses and putting the proceeds into U.S. Treasury bonds.

But believe it or not, there are some who simply think rates can stay low and inflation can run hot forever. Summing up the method of thinking for those advocating for unlimited debt is Paul Sheard, a research fellow at the Harvard Kennedy School. He said: “The world has changed. The intellectual frameworks have evolved. We don’t need to worry about debt.”

Advocates at J.P. Morgan claim that the U.S.’s rate of borrowing “will barely make a dent in global gross savings, which are worth more than $25 trillion a year,” the Journal reports.

Elena Duggar, associate managing director of credit strategy and research at Moody’s Investors Service, said: “There’s something that saves the advanced economies from that pickup in debt we see, and it’s the low debt-servicing costs.” 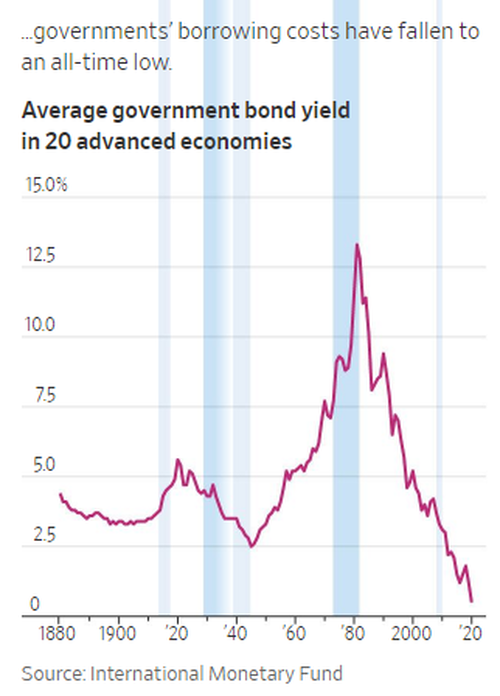 But critics point out the obvious: spending in the U.S. has simply gotten out of control and we may have already let the inflation “genie” out of the bottle, which could decimate quality of life for many middle and lower class Americans.

Charles Goodhart, a former member of the Bank of England’s monetary policy committee and an emeritus professor at the London School of Economics thinks that governments are learning that reactions like those we took in 2008 “work” at the same time they are beginning to “fail”. In other words, he thinks we’re behind the 8-ball in how we’re addressing current policy versus historical policy.

“The generals are always fighting the last war. Governments didn’t do enough before, so they’re going to overdo it this time,” he said.

“If you look at the path of global fiscal policy, it’s a massive bet on the secular stagnation hypothesis. It’s a bet on a massive private savings glut and investment dearth for a long time to come,” Former U.S. Treasury Secretary Lawrence Summers said in 2014.

De Grauwe concluded: “There are still limits to government debt. They are just much further out than we used to think.”

You can read the full WSJ writeup here.