1. Beijing signals that Hong Kong is preferable to New York for Chinese IPOs

China plans to exempt companies that are going public in Hong Kong from seeking approval from its cybersecurity regulator, following its recent proposed new laws requiring vetting companies for IPOs in foreign countries.

The move sends a clear signal that Hong Kong, Shanghai and Shenzhen are the preferred destinations for Chinese tech companies that want to go public, as the government grows warry that the vast data controlled by tech giants can be vulnerable to the prying eyes of foreign governments. Startups including Xiaohongshu, or “Little Red Book,” are putting their U.S. IPOs on hold.

Meanwhile, the Biden administration warned investors Friday about the risks of doing business in Hong Kong, issuing an advisory that China’s push to exert more control over the financial hub threatens the rule of law and endangers employees and data.

At least Presidents Xi Jinping and Joe Biden can agree on one thing: Hong Kong is no longer special. It’s basically the same as any other Chinese city. 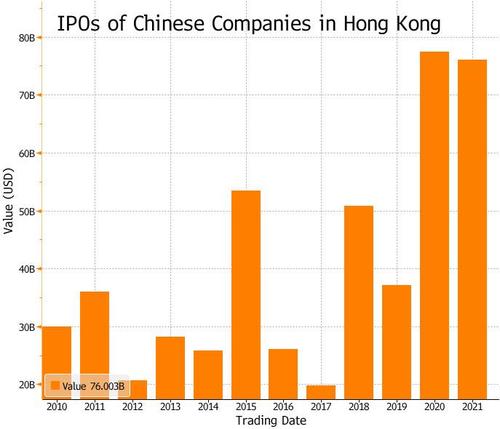 The surprising cut to the reserve requirement ratio earlier this month triggered concern in markets that China’s economy may be deteriorating fast under the weight of slower credit growth and Beijing’s zero-tolerance policy for Covid. But it turns out there was little reason to worry, as data from retail sales to trade all beat economists’ forecasts. The RRR cut was largely a fine-tuning of its monetary policy toward supporting more growth, but it wasn’t the start of an easing cycle.

The trade-weighted yuan has reached the strongest level since 2016. China’s currency has benefited from investors’ preferences for carry trades after Federal Reserve Chair Jerome Powell reiterated that the central bank is a “ways off” from tapering. Adjusted for volatility, the yuan ranked as the world’s fourth highest-yielding currency, trailing only the Argentine peso, Turkish lira and Indian rupee. 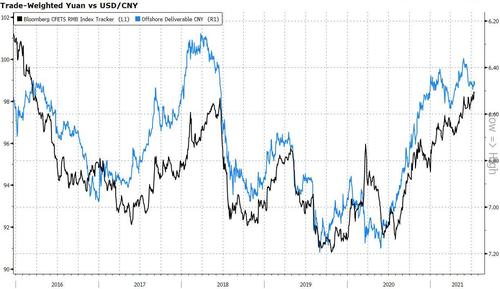