Last week, we discussed that as the market hit new highs and the index returned to more extended and overbought conditions, a correction was likely. To wit:

“Analysts have set a very high bar for the markets to hurdle, given already lofty valuations. With indices already well-stretched above their historical means, there is much room for disappointment. With the currently very overbought short-term market, a 3% to 10% correction this summer remains likely.”

Well, between Friday and Monday, the market did sell-off by 3% to touch the 50-dma. However, at that point, “dip buyers” emerged to chase the market back to new highs. While this does indeed negate any short-term bearish action, it is worth noting two things (shown below):

The good news is that the lack of real progress over the last couple of weeks did work off most of the “money-flow sell signal,” which preceded the selloff. If the market can continue to maintain its more bullish posture, this should reverse our signals as early as next week.

While the upside remains somewhat limited, given the already substantial advance this year, it will alleviate downside concerns momentarily. However, with that said, the extremely low level of volatility this year is reminiscent of 2017. The reason is that “stability” is fragile. In other words, stability ultimately leads to instability.

Economist Hyman Minsky argued that during long periods of bullish speculation, the excesses generated by reckless, speculative activity eventually lead to a crisis. Of course, the longer the speculation occurs, the more severe the crisis will be.

The Next Minsky Moment

Minsky argued there is an inherent instability in financial markets. He postulated that abnormally long bullish cycles would spur an asymmetric rise in market speculation. That speculation would eventually result in market instability and collapse. Thus, a “Minsky Moment” crisis follows a prolonged period of bullish speculation, which is also associated with high amounts of debt taken on by both retail and institutional investors.

One way to view “leverage” is through “margin debt,” and in particular, the level of “free cash” investors have to deploy. In periods of “high speculation,” investors are likely to take on excess leverage (borrow money) to invest, which leaves them with “negative” cash balances.

While “margin debt” provides the fuel to support the bullish speculation, it is also the accelerant for the reversal when it occurs. Periods of low volatility, and steadily rising prices, lead to market complacency. As noted, the last period where we saw similar levels of low volatility was 2017.

Of course, that low-volatility period in 2017 didn’t last long. The “Minsky Moment” arrived in 2018 and lasted through 2020 as price swings punctuated the markets. While this current low-volatility regime can certainly last a while longer, it is likely naive to believe the next “Miskey Moment” will be any less punishing than the last.

The last time I wrote about a “Minsky Moment,” here was my conclusion.

“Professor Minsky taught that markets have short memories and they repeatedly delude themselves into believing “this time is different.” Sadly, judging by today’s market exuberance, once again Minsky is likely to be proven correct.

All that is missing is the catalyst to start the ball rolling.

An unexpected recession would more than likely do to trick.”

That was February 2020, one month before the recession began.

“In ‘Margin of Safety,’ Seth Klarman tells a story about the market craze in sardine trading. One day, the sardines disappeared from their traditional habitat off of the Monterey, California, shores. Due to their scarcity, commodity traders bid up the price of sardines. Prices soared.

Eventually, along comes a gentleman who decides to treat himself and opens up a can of sardines and eats them. He immediately gets ill and tells the seller the sardines are no good. The seller quickly responds, ‘You don’t understand. These are not eating sardines; these are trading sardines!’” – Doug Kass

On Monday, the market sold off over fears of the “Delta variant.” (Someone ate the sardines.) On Tuesday, as the market touched the 50-dma, computer algorithms furiously “traded sardines.”

Such is not an investor’s market. Rather, it is a market fraught with speculative frenzy as investors fear “missing out” more than “losing capital.”

In the short term, speculation seems “normal.” However, as the price advances, the underlying valuations become an inherently more significant drag on outcomes. Currently, those valuations exceed levels rarely witnessed in history. (Table courtesy of Tavi Costa of Crescat Capital)

If you are a long-term investor, it is becoming more critical to understand the risk you are undertaking. Likewise, if you are a trader, it is essential to determine what type of trader you are. As Doug concluded:

“In terms of trading, more than ever, it’s important to remember that there are two kinds of traders:

Remember those words because, despite the appearance of the many talking heads in the business media who regal in the reversal of Monday’s losses and consecutive winning trades. The stock market is likely to grow more difficult and narrow in the months ahead.”

Over the past few years, Michael Lebowitz and I have written many articles discussing the perils of excessive monetary policy. These perils range from slower economic growth, excessive speculation, the formation of asset bubbles, and wealth inequality. The last point is most important.

Wealth inequality is the catalyst behind the calls for socialism, the increase in riots, and racial tensions. When individuals cannot make “ends meet,” they begin to lash out at those who are prospering at their expense. Such is not new but rather a consequence of similar periods of inequality throughout history. Notably, the wealth gap is directly related to the Federal Reserve monetary interventions.

The speculative retail frenzy in the financial markets is further evidence of the Fed’s monetary mistake of creating “Moral Hazard.“ As Charles Mackay noted in his book on “The Madness Of Crowds:“

“Essential is the understanding of the role psychology plays in the formation and expansion of financial manias. From the 1711 ‘South Sea Bubble’ to the 2000 ‘Dot.com crash,’ all bubbles formed from a similar ‘panic’ by investors to chase ongoing speculation.”

On Thursday, Michael Lebowitz and I discussed the ongoing problems of the Fed’s monetary interventions in much greater detail. This discussion includes 10-clips from various Fed members, Jeremy Grantham, Mohammed El-Erian, and Howard Marks, to support our views.

The problem for the Fed, as discussed, is they have now inflated multiple asset bubbles from which they cannot extricate themselves. If they try and “taper” monetary policy, the markets panic. With the entirety of the financial ecosystem more heavily levered than ever, the Fed’s most significant risk is the “instability of stability.”

Ultimately, the Fed can choose to reverse monetary policy and navigate the fallout. Or, some exogenous event will eventually do it for them.

The Fed Is Deflationary

On Thursday, Mish Shedlock penned an excellent post on Lacy Hunt and the inflation argument. While I suggest reading it in its entirety, the following except supports our recent views on why “Monetary Policy Is Not Expansionary.”

“When debt is already at extreme levels, a further increase in debt leads to an increase in the risk premium on which a borrower will default suggesting that the bank or other lender will not be repaid.

In terms of the impact on monetary activities, a drop in the LD ratio means that more of bank deposits are being directed to the purchase of Federal, Agency and state and local securities in lieu of private sector loans. The macroeconomic result is that funds are shifted to sectors that are the least productive engines of economic growth and away from the high multiplier ones.” – Dr. Lacy Hunt

The shift in “risk preference” by banks is evident. Each time the Fed engages in QE programs, banks “hoard” those reserves as the “risk/reward” of loaning money into the economy is not justified.

As we repeatedly stated previously, disinflation is more likely than accelerating inflation.

With the base effects now exhausted, the cyclical, structural, and monetary considerations suggest inflation will decline by year-end. Thus, the “inflationary psychosis” gripping the bond market is already reversed as the realization of slower economic growth and disinflation occurs. 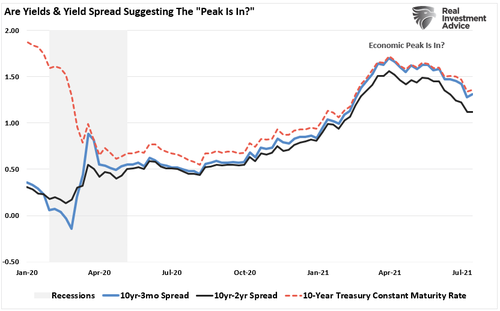 Given that wages are not keeping up with inflation currently, consumers’ ability to continue expanding their consumption “sans stimulus” will become problematic. 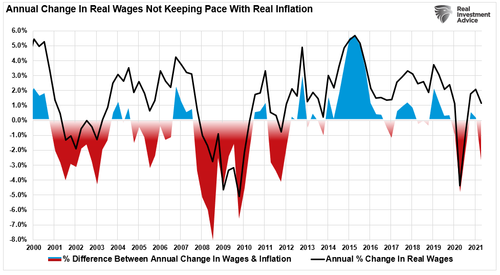 Given we already see cracks in the housing and auto markets, there is likely a deflationary “payback” coming much sooner than expected.

“QE sponsors bubbles and central banks are addicted to it.”

The problem with addictions is the eventual “withdrawal.”