“An Environmental Disaster”: An EV Battery Metals Crunch Is On The Horizon As The Industry Races To Recycle

“An Environmental Disaster”: An EV Battery Metals Crunch Is On The Horizon As The Industry Races To Recycle

If there’s one thing about the growing demand for EVs that we have tried to point out over the last month, it’s the fact that the rhetoric about the “green” vehicles being perfect for the environment with little consequence isn’t exactly 100% accurate.

Just over the last two months, we’ve written not only about how much driving needs to be done in EVs to make them better for the environment than internal combustion engine vehicles, but we’ve also noted that EV carbon footprints aren’t necessarily as better than ICE vehicles as many people think.

Now, more questions are starting to be raised about the potential unintended consequences of the EV revolution. Notably, how can the metals used for EV batteries be recycled and reused as part of a circular economy before a materials crunch – or environmental impact from mining – negates the “green” label affixed to EV vehicles. That’s the question FT delved into this week in a new report.

And who better to make it clear that recycling is an issue than former Tesla executive JB Straubel. He started a company called Redwood Materials in 2017 that is focused on trying to break down used batteries and reconstitute them into a fresh supply of metals for new ones. 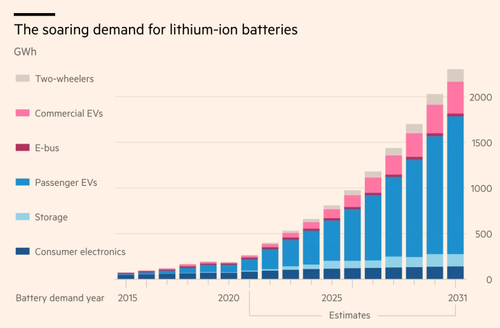 Despite EVs bring zero emission while being driven, the “mining, manufacturing and disposal process for batteries could become an environmental disaster for the industry,” FT wrote.

Straubel said to FT: “It’s not sustainable at all today, nor is there really an imminent plan — any disruption happening — to make it sustainable. That always grated on me a little bit at Tesla and it became more apparent as we ramped everything up.”

His company takes batteries from old smartphones, power tools and scooters, and turns them back into metals like nickel, cobalt and lithium so they can re-enter the supply chain. His goal is to stop mining from places like the Democratic Republic of Congo, Australia and Chile, and start mining household waste. Straubel says there’s about 1 billion used batteries sitting around in households.

Gene Berdichevsky, chief executive of battery materials start-up Sila Nano, noted that there’s a material amount of cobalt in smartphones compared to EV batteries: “So for every 300 smartphones you collect, you have enough cobalt for an EV battery.”

Cobalt mining is particularly resource intensive. “Cobalt can travel more than 20,000 miles from the mine to the automaker before a buyer places a ‘zero emission’ sticker on the bumper,” FT points out.

Straubel says that EV emissions can be halved even further from where they are if batteries and metals can be continually recycled.

Redwood has raised more than $700 million from investors to hire 500 people and expand its operations. This year it’ll process 20,000 tons of scrap and has already recovered enough material to build 45,000 EV battery packs.

Redwood already has partnerships with companies like Panasonic and Amazon. And companies like Apple are getting on board with the circular economy idea, which CEO Tim Cook aspiring to “not to have to remove anything from the earth to make the new iPhones”.

A circular economy with EV batteries would give the world a significant push forward to meeting net zero emissions goals. Kunal Sinha, head of copper and electronics recycling at miner Glencore, said: “For the world to hit net zero — by 2050 you can’t do it with just resource efficiency, switching to EVs and clean energy, there’s still a gap. That gap can be closed by driving the circular economy, changing how we consume things, how we reuse things, and how we recycle.”

As EV adoption grows, demand for nickel, cobalt and lithium will continue to rise. Paul Anderson, a professor at the University of Birmingham, said: “There is going to be a mass scramble for these materials. Everyone is panicking about how to get their technology on to the market and there is not enough thought [given] to recycling.”

A “crunch” for the materials will likely happen as a result of demand surpassing supply, which will take place in 2 to 3 years, according to Monica Varman, a clean tech investor at G2 Venture Partners.

Berdichevsky concluded: “In the future we’ll replace the car, but not the battery; of that I’m very confident. We haven’t even scratched the surface of the battery age, in terms of what we can do with longevity and recycling.”