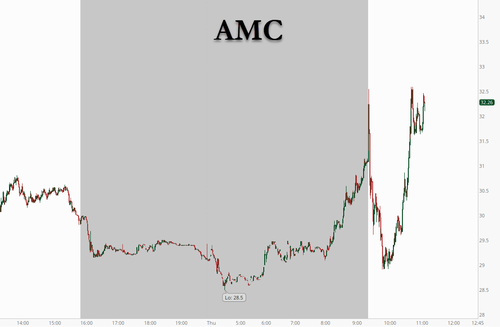 Permabear Crispin Odey has seen enough of the meme stock madness, and has officially pushed his chips in short on AMC Entertainment, according to a new report. In response to the news, the stock has pared its pre-market losses on Thursday morning and is now up over 6%.

Prior to Odey announcing his short, the stock had been down 5 straight days, losing about 23% in value, Bloomberg noted this morning.

London based Odey manages about $4.1 billion and “recently” took the short position in the name, according to a report Thursday morning by the Financial Times. The position was taken in a portfolio run by James Hanbury, who manages about $1.5 billion across his funds.

Hanbury told his investors that that meme stock mania has “created some major distortions” and some “compelling short opportunities”. And while we’re certain he’s right, timing is going to be everything with this bet.

AMC stock has mostly exploded higher as a result of misguided interest from a group of retail traders who believe that manipulating the price of the security higher will create an infinite short squeeze that some traders hope will eventually value the company in the hundreds of billions of dollars. Intense retail interest, and the ensuing call buying in the name has driven its price from a 52 week low of $1.92 to as high as $72 over the last year. These are likely the “distortions” Odey is talking about.

And while in principle Odey is 100% right, meme stock traders have already claimed the heads of several hedge fund managers, including Melvin Capital’s Gabe Plotkin, who was run over by the initial GameStop frenzy.

In fact, FT notes that some “retail investors appeared to be directly targeting hedge funds with large short positions”. Odey could be adding his name to the list with the announcement of his new position. For now, the fund is getting the better of retail traders. The position has already been “one of his biggest winners, according to an investor letter, making money in July as AMC’s shares have dropped from nearly $57 to $37 by the end of the month.”

Odey really going for it this year pic.twitter.com/h1DLVNTiPQ