Even In A Best Case, The Job Market Won’t Be Back In Balance For 10 Months: “What Happens To Wages Until Then?”

Even In A Best Case, The Job Market Won’t Be Back In Balance For 10 Months: “What Happens To Wages Until Then?”

Friday’s blockbuster jobs which revealed that 943K jobs were added in July, and Monday’s job openings data according to which there were 1.4 million job openings than unemployed workers, confirmed several themes on the US labor market:

As BofA’s chief economist Ethan Harris notes, Friday’s employment report checked all the boxes: faster-than-expected job growth, upward revisions to prior months, a much bigger-than-expected drop in the unemployment rate, a strong increase in average hourly earnings, and an uptick in the participation rate.

To be sure, there were some big picture concerns, most notably that the entire growth was due to seasonal adjustments (unadjusted payrolls actually declined by 133K, with UBS chief economist Paul Donovan making the following caveat: “employment data is full of cautions. People are not spending in a seasonal pattern, so firms are not hiring in a seasonal pattern, so data is adjusting for a seasonality that does not exist.” But setting this major caveat aside, the labor market remains impressive as the following observations from Harris attest:

As we discussed yesterday when we looked closer at the JOLTS data released yesterday morning, the job shortage—as of June—
was even worse than expected. 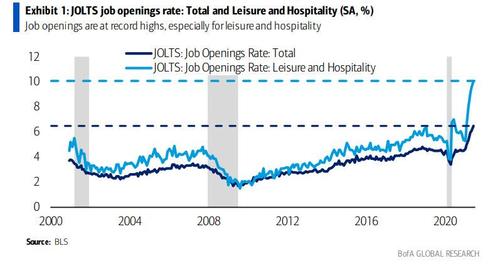 The Bloomberg consensus was expecting a small 161k increase in openings and instead the combined revisions and July increase were 864k. To put that into perspective:

And, of course, as we first pointed out, there are now 1.4 million more job openings than unemployed, a level that has been surpassed just on a handful of occasions in on record. 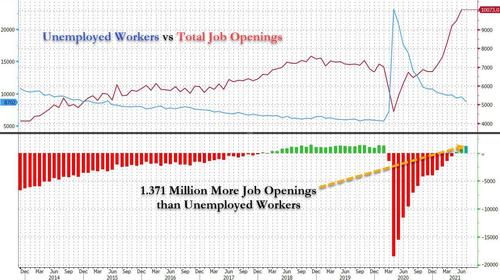 As Harris puts it, “even prove-it-too-me Chair Powell must take some comfort from these numbers”; and shares some additional observations:

The Fed has been encouraging investors to focus on outcomes rather than forecasts when it comes to signposts in the economic recovery. However, you don’t have to rely on a fancy econometric model to be impressed by recent trends. Consider the current imbalance in the labor market. In February 2020, before the pandemic hit, there were about 7.5 million job openings in the US. As of June 2021 there were more than 10 million. That’s an average monthly increase of about 150k. Judging from surveys like the NFIB small business survey, openings probably rose again in July (ZH: they did to a new record high).

Another simple calculation is to extend recent trends in the unemployment rate. The unemployment rate has fallen 1.3% in the first seven months of this year, or at an average of about 0.2% per month. At this rate it will hit 4% by February or March of next year.

That said, even if the Fed were to take immediate action, Harris’ concludes that it will clearly take a while to reverse this imbalance. For example, the economist says, “even if supply surges and starts growing 250k per month faster than labor demand, the market won’t be back in balance for 10 months.” The question is happens to wages over this period, and an even more important question: what happens to inflation if indeed wage growth is here to stay? To be sure, the Fed is saying we should withhold judgment until higher wage and price growth are firmly established, but to Harris and Bank of America that is just a matter of months, not years.