The Cost Of Saving The Economy: $1.7 Billion Per Hour Every Hour

The Cost Of Saving The Economy: $1.7 Billion Per Hour Every Hour

Back in 2014, Citigroup’s Matt King calculated that it costs central banks $200 billion per quarter to avoid a market crash. Boy have things changed since then.

After another modest dip in the market was bought with frenzied gusto this morning, BofA chief investment strategist Michael Hartnett writes in his latest Flow Show note that “investors have zero fear of central banks”, to which one can add that investors fully expect central banks to bail out even the tiniest market dip.

And who can blame them? On Wednesday, the New Zealand Central Bank – which as a reminder is now tasked with also containing the country’s massive housing bubble it helped create –  balked at raising rates this week after the country announced a fresh round of lockdowns due to one covid case, despite NZ house prices up 30%.

But there is another, more tangible reason, why investors feel emboldened by central banks. As Hartnett calculates, the Fed has bought $4 trillion bonds in the past 18 months, twice the amount the US spent on War in Afghanistan past 20 years… 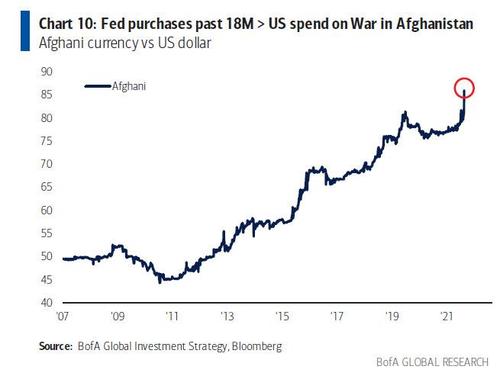 … as it, and other global central banks, have spent $834 million every hour buying bonds since COVID.

Add to this that the US government spends $875 million every hour in ’21 and one gets a staggering number of $1.7 billion spent between central banks and the profligate US government to prevent a market crash economic disaster. As Hartnett puts it, “little wonder everyone believes in TINA & BTD.”

While most of this money has ended in stocks, a lot of which has also trickled down into the broader economy, and according to Hartnett, “stimulus has caused immense inflation of Wall St assets; and more recently inflation on Main Street.” Some numbers:

And even as the Fed continues to preach that this soaring inflation is “transitory”, the BofA strategist believes that it is about to hammer profits leading to the stagflation that Goldman warned about this week:

All of this leads to a likely outcome of a Fed potential “policy mistake” in the fall, when the US economy could be hit by a “flash recession”, which Hartnett believes will be revealed via the sharp dip in global PMIs which is already in progress. 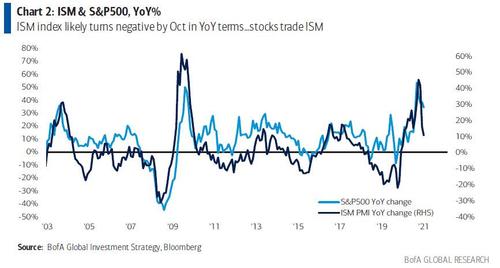 So as we head to a period of negative returns in stocks and credit in the second half, Hartnett’s advice is to own defensive quality in H2 as a good market hedge to peak policy in H1 and a good macro hedge to the coming peak profits. 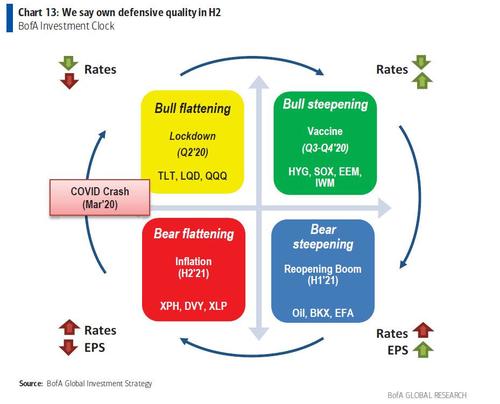