It was (at least a few weeks ago), supposed to be the most highly anticipated central banking event of the summer, where Jerome Powell was expected to reveal the timeline of the coming taper; instead it ended up being a marketwide dovish catalyst which sent stocks surging to new all time highs, the dollar sliding and yields sharply lower, as the best Powell could do – even as he said that  the central bank could begin reducing its monthly bond purchases this year, something everyone knew well by now – was mention the latest FOMC Minutes as a guidepost to tapering, all the while repeating that inflation may be transitory and is not in itself a catalyst to tighten.

The bottom line, and the reason for the market’s dovish eruption: Powell provided no explicit taper signal, as he likely wants to see more jobs reports for accumulated evidence that ‘substantial further progress’ on the labor market is being made, while dismissing soaring inflation as transitory.

Spoos rose during the address, rising above the nice, round 4,500 number for the firs time. Ten-year Treasury yields nudged slightly lower to around 1.33%. 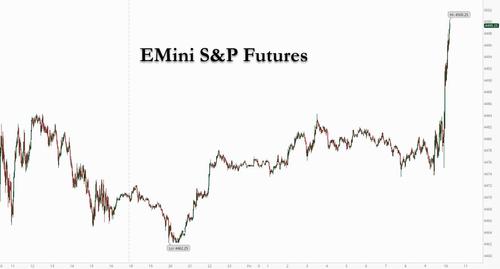 Courtesy of Newsquawk, here is a snapshot hot take on what Powell said, and didn’t say:

The bottom line is that Powell is more focused on the labor market than inflation, does not appear to be overly concerned by the pandemic, although notes the risks that could threaten growth, and he likely wants to see more accumulated evidence that the labor market is moving towards the ‘substantial further progress’ threshold.

As Pantheon Macro’s Ian Shepherdson summarized, “In short, the song remains the same; the test for ‘substantial further progress’ has been met for inflation, but not for employment, and the Delta variant poses new risks. We still think it’s reasonable to expect the tapering announcement in November, but it could easily be delayed if the post-Delta rebound takes longer than we expect.”