Authored by Techno Fog via The Reactionary,

Let me tell you about an under-the-table immunity deal:

Dr. Fauci lied to Congress about US funding of gain of function research at Wuhan to protect US institutions. And to show their appreciation, the institutions will protect Dr. Fauci by declining to prosecute his lies. 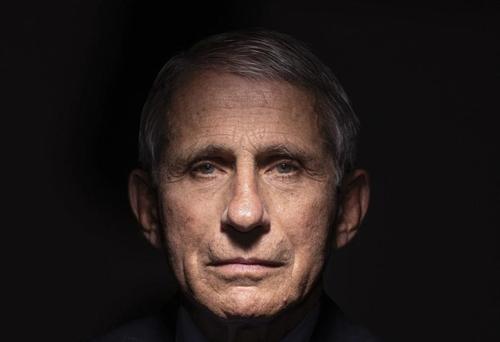 Revelations from The Intercept’s FOIA requests, which the US government took a year to release to the public (and only after litigation was pursued), show federal funds were used “to fund bat coronavirus research at the Chinese laboratory.” The Intercept continues:

According to Richard Ebright, a molecular biologist at Rutgers University, the documents contain critical information about the research done in Wuhan, including about the creation of novel viruses. “The viruses they constructed were tested for their ability to infect mice that were engineered to display human type receptors on their cell,” Ebright wrote to The Intercept after reviewing the documents.

If EcoHealth Alliance sounds familiar, it is because its president, Peter Daszak, led the effort to mislead the public about the origins of COVID-19 and the likelihood it leaked from the lab. It was Daszak who organized and signed an influential “scientific” statement in The Lancet disregarding the lab leak theory – while concealing his role in the research “and creating the impression of scientific unanimity.”

It was also Daszak who worked in conjunction with the US Government – in particular, Dr. Fauci – to push the false narrative that COVID couldn’t have been leaked from a lab. In April 2020, Dr. Fauci was congratulated by Daszak for helping “dispel the myths being spun around the virus’ origins.” 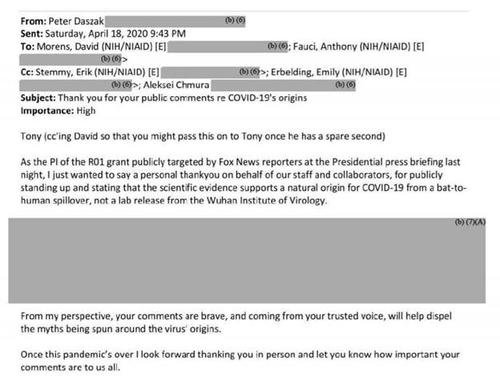 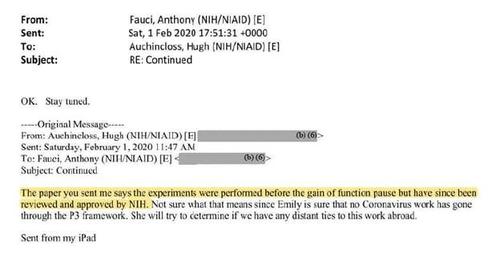 After the article from The Intercept published, Dr. Fauci has been (again) under fire for lying to Senator Rand Paul about the US government’s funding of gain of function research at Wuhan.

Of course, Dr. Fauci wasn’t the only public official lying to the public. Dr. Francis Collins, the director of the NIH, was asked point-blank by radio host Hugh Hewitt about this funding. Here is what Dr. Collins said:

Hugh Hewitt: But can you rule out, Dr. Collins, the United States having funded any sort of gain of function research in Wuhan?

Dr. Francis Collins: We absolutely did not fund gain of function research in Wuhan.

Understanding what this is.

Properly understood, the two most powerful public health officials in the United States – Dr. Collins and Dr. Fauci – are running an intelligence operation against the American people. Assisting in the operation is the Biden Department of Justice, who apparently refuses to prosecute Dr. Fauci for his false statements to Senator Paul. Also providing help are those within the government who have been obstructing public and media FOIA requests into the funding of gain of function research.

We observe, however, that their deceit, while effective, are also self-defeating, undermining their position that COVID-19 was of natural origins. You see, to an astute observer, the lies by Dr. Collins and Dr. Fauci are circumstantial evidence of guilt.

The depth of that guilt is yet to be fully understood.