Rabo: Markets Are Confused And Unhappy. Alpha Or Delta? Inflation Or Deflation

Rabo: Markets Are Confused And Unhappy. Alpha Or Delta? Inflation Or Deflation

By Michael Every of Rabobank

Friday saw markets abuzz following a call between US President Biden China’s Xi Jinping. A call! That means free trade! That means good for markets!….right? No, it doesn’t. The US read out stressed the call occurred out of American frustration that lower level contacts had failed to achieve any traction, and no concessions were made, even if there quite probably was a “C’mon man, can’t we cooperate on green and disagree on everything else?” To which the answer was likely still ‘no’: because who controls green raw materials and green industrial value chains is a zero-sum game. More importantly, however, the US made clear that the primary goal was to ‘to ensure competition does not veer into conflict’. In other words, not so much about the desire for the absence of trade war as the absence of war. Is that now considered bullish?

So, a call; and then to arms anyway. Because within hours it was reported the US is considering a new 301 trade investigation against China and the subsidies it offers its SOEs. Of course, if this were to occur it would be hard to prove, would take months, and even then wouldn’t resolve US trade imbalances, just reallocate them (e.g., moving exports away from China to Vietnam or India.) However, that is:

Moreover, the US is reportedly also considering renaming Taipei’s trade mission to DC to include the word “Taiwan”, as is the EU, both infuriating Beijing. The Global Times warns if this happens then recalling China’s ambassador to the US –as happened with Lithuania alongside an export boycott– is likely “the lowest diplomatic reaction.” Indeed, it stresses this would, in its eyes, mean the US dropping its One China Policy, and would prompt Beijing into imposing economic sanctions on Taiwan while placing “the island’s airspace into the patrol area of the PLA”. It concludes: “It seems that sooner or later, the Taiwan Straits will be plunged into a storm that will change the situation there drastically.”

Meanwhile, the solemn anniversary of 9/11 in the US coincided with: the Taliban starting to Tali-ban Western things; the internal division and decline of the West flagged in both Chinese and Western media (with Western social media both for and against); the Al Qaeda leader reappearing to stir the Middle East pot; a slimmed-down Kim Jong-Un of North Korea launching a new long-range missile for his nukes; Iran making only token CCTV concessions on its nuclear program; the US pulling its advanced missile defenses out of Saudi Arabia; and Ukraine’s president warning of Russian invasion as Moscow moves closer to union with Minsk and undertakes another massive joint military exercise. I am sure markets and Western social media will focus on “The Kim Jong-Un diet”, but the rest gets stuck in their throat.

On the international front, supply chain news is also worrying. Backlogs at LA port are at new record highs, and while we may have hit a new peak in prices –unless geopolitics gets messy– shippers are locking these prices in alongside various attempts at industry consolidation. The line is being drawn that this is a new shipping normal that we need to adjust to rather than a boom-and-bust cycle – or at least that is what the Too Big To Sail oligopoly is trying to achieve, as too-big-to-fail neoliberalism has managed to achieve in all other sectors. At least until government gets involved, which history strongly suggests it will.

On a related note, Matt Stoller in “Counterfeit Capitalism: Why a Monopolized Economy Leads to Inflation and Shortages” underlines the US has built both inflation and shortages into its system by deliberate monopoly and oligopoly choices that cannot cope with any of the stresses currently being experienced. He refers to the inadvertent collapse that kicks in along supply chains when, for example, US trucking firms, now unable to ship in spare parts, find all truck repairs are dependent on one key part…that need to be *trucked* in from Mexico. And when the trucks fail, everything else fails. ‘Resilient’ this is not. Yes, monetary and fiscal policy both matter hugely, as does the location of production vis-à-vis labour power: but if almost every industry is structurally hamstrung by growing layers of monopoly and oligopoly, then EM-style inflation and shortages are here to stay, he argues; unless the presidential executive order working against them achieves something major, which will likely take years at best.

On the fiscal front, the US Democrats are reportedly now prepared to offer much lower tax increases than previously flagged in their $3.5 trillion fiscal stimulus bill. The top corporate tax rate would now rise from 21% to 26.5%, not 28%, and capital gains from 20% to 25%, not 39.6%. The important thing here is that if the tax take is to be lower, then the spending side will have to match if it is to be covered. Hence we already don’t have a $3.5 trillion package, but something moving in the direction of what Senator Manchin has been talking about – if even that can pass. At least that might take the edge off shipping inflation: after all, “Consumer demand must ease to end supply chain crisis,” says a Maersk executive. 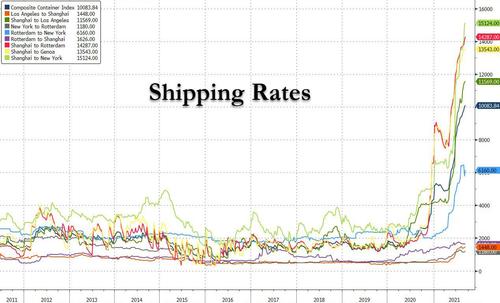 On the monetary front, this is ironic timing for the Fed to be tapering, doubly so given even Bloomberg and the Financial Times are grasping that –guess what?– Covid has not been beaten by the vaccines. Indeed, considering we know vaccine effectiveness wanes after six months, the US and EU will both be heading into winter virus season with that biological headwind in front of them: does the market really want to rule out new lockdowns ahead? Nonetheless, the market chatter is that we could QE tapering flagged ahead for a start date before the end of the year. And for those who feel they can avoid all of this mess with a monetary side-step, the US is also reportedly closer to moving against stable coins, as yet another anti–crypto sabre is rattled.

Bringing all of these stories together, markets are confused and unhappy. Alpha or Delta? Inflation or deflation? And “geopolitics” every which way. As such, US stocks went down on Friday, and by a non-negligible amount, while US Treasury yields went up, not down, and crypto isn’t going down even as regulators say they are going to take it down. Expect more such confusion until markets understand what is actually happening on Covid (as if we don’t know), on fiscal policy (yes/no?), then on QE (no/yes?), on supply chains (no?), and on crypto (no-no?).

As I keep repeating, it’s all about political calls at this point – just not Friday’s Biden-Xi call; and hopefully not about the call to arms.