Are Too Many Bears Looking For A Correction?

Are Too Many Bears Looking For A Correction?

Are there too many “bears” looking for a correction?

When it comes to financial markets, there is one truism as noted in Bob Farrell’s famous investment rules:

“When all experts agree, something else tends to happen.”

Such makes perfect sense given that the “market” is a reflection of the psychology of “buyers” and “sellers.” Such is why sentiment plays such an important role in market expectations.

As an example, a recent Deutsche Bank survey found that 58% of the 550 global market professionals surveyed expect a 5-10% correction by year-end.

Of those managers, only 14% saw the index higher than it is currently, in the next 3-months.

There are many good reasons for concern beyond just a very extended period without a meaningful correction. Currently, the market has gone 319-days without a correction to the 200-dma.

A Wall Of Worry

“Are too many expecting it [a correction] will happen?”

Historically speaking, markets tend to climb a “wall of worry.” But, as noted above, when many Wall Street analysts expect something to happen, it is often profitable to bet in the opposite direction.

Over the last year, in particular, the market ignored concerns over valuations, the impact of the “Delta” variant, inflationary pressures, slowing economic growth, and numerous geopolitical events. Instead, as noted in “Investors Hold Record Allocations,” individuals have ramped up exposure to risk betting on the continuation of the Fed’s ongoing monetary interventions.

It is not surprising that equity ownership is at record highs and highly correlated to valuations. Such is the representation of rising prices on investor psychology. As a result, investors continue to chase overvalued equities until the eventual mean-reverting event occurs.

Such is also the very essence of the meaning of “climbing a wall of worry.” Despite the fact investors “know” they are overpaying for stocks, the “Fear Of Missing Out” leads to the dismal of concerns as “greed’ overtakes “logic.”

Currently, this is the phase of the cycle we are in now, and the desire to “buy the dip” outweighs concerns of a more significant correction.

As noted this past weekend, it is certainly possible the market can continue its low volatility advance for a while longer. However, historically speaking, low volatility has always led to higher volatility. The table below (courtesy of TheMarketEar,) shows the maximum drawdown in any given year. Note that years of minimal drawdowns always get followed by years of larger ones.

In other words, while there may be “too many bears” currently, it doesn’t mean they will be wrong.

The question is, when will the markets start paying attention to the risk?

As noted this past weekend, there are numerous warnings from weakening breadth, lower participation, and negative divergences. Sentiment Trader provided additional commentary.

“To differentiate temporary slowdowns from real problems, we look for significant macro deterioration. The Macro Index Model combines 11-diverse indicators to determine the state of the U.S. economy. Investors should be bullish when the index is above 0.7 and bearish when below.

Once the final reports were in for August, the model plunged below 46%, the 2nd-lowest reading of the past decade.“ 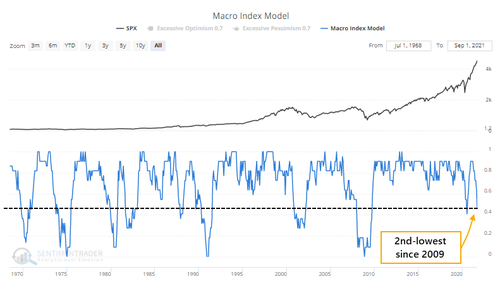 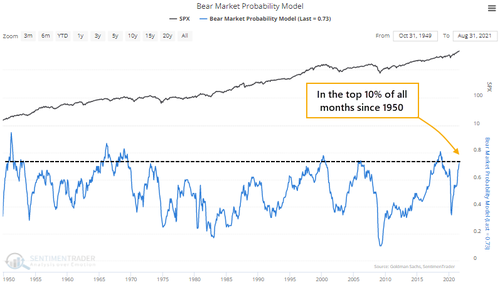 The combination of these two measures should not be overlooked. To wit:

“The chart below shows the spread between the Bear Market Probability and Macro Index models. The higher the spread, the higher the probability of a bear market. The chart shows that the S&P 500’s annualized return is a horrid -17.6% when the spread is above 20% like it is now.” 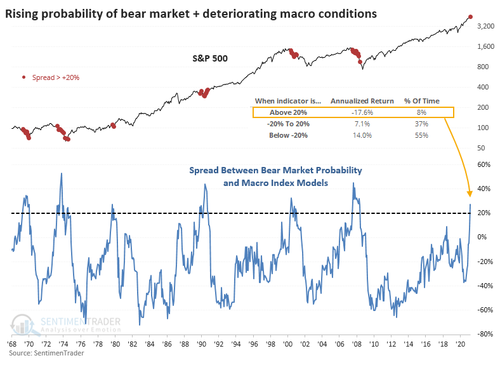 Morgan Stanley Wealth Management’s Lisa Shalett is also predicting a 15% pullback for a market she sees as “priced for perfection.”

She, like us, has suggested raising cash levels, adding non-correlated assets, and reducing overall risk, stating:

“The strength of major U.S. equity indexes during August and the first few days of September, pushing to yet more daily and consecutive new highs in the face of concerning developments, is no longer constructive in the spirit of ‘climbing a wall of worry.’”

There is a not so insignificant risk this market will shake off short-term concerns for the time being. Thus, a “buy the dip” opportunity could well be in the offing in the next few days. Such has repeatedly been the case since last November.

However, at some point, the markets will violate this upward trend and complete a retest of the 200-dma.

It is one of the few things of market dynamics that is virtually a guarantee. What will cause it, or when it will happen, is always unknown.

It is times like these I find it helpful to remind myself of something Howard Marks once wrote:

“Resisting – and thereby achieving success as a contrarian – isn’t easy. Things combine to make it difficult; including natural herd tendencies and the pain imposed by being out of step, since momentum invariably makes pro-cyclical actions look correct for a while. (That’s why it’s essential to remember that ‘being too far ahead of your time is indistinguishable from being wrong.’

Given the uncertain nature of the future, and thus the difficulty of being confident your position is the right one – especially as price moves against you – it’s challenging to be a lonely contrarian.”

Moving against the “herd” is where investors generate the most profits in the long term. But, unfortunately, the difficulty for most individuals is knowing when to “bet” against those who are being “stupid.”

As noted above, there is a reasonable possibility the market could bounce as “Pavlovian investors” once again “buy the dip.” However, there is also a possible risk of a correction between 5% and 10%.

Unfortunately, I don’t know which it will be until we start seeing definite signs of the market breaking down. At that point, it will be too late to make adjustments. Such is why, as we have stated previously, this is an opportune time to get in front of risk by taking some simplistic actions.

These actions will not protect you entirely from a decline. They will, however, lessen the blow and allow you to rebalance risk accordingly where the time comes.

Or, you can do nothing and hope for the best.