Besides the “sudden” emergence of Evergrande contagion – which nobody could have possibly predicted – we are facing an extremely busy week chock-full of central bank announcements and two closely-watched elections in Canad and Germany.

The most important event this week will be the Fed’s decision on Wednesday, and this meeting is also significant as we’ll get the FOMC’s latest economic projections (SEP) and the dot plot too. In terms of what to expect, DB economists write in their preview that they expect the statement to adopt Chair Powell’s language that a reduction in the pace of asset purchases is appropriate “this year” as long as the economy remains on track. Although they see Powell maintaining optionality about the exact timing of that announcement, their view is that the effective message will be that in the absence of any material downside surprises, the bar to pushing the announcement beyond November is relatively high. For the dot plot, they expect there’ll be an upward drift in the dots that raises the number of rate hikes in 2023 to 3, followed by another 3 increases in 2024.

Of course, as Deutsche Bank’s Jim Reid notes, it’s difficult for monetary policy to operate in isolation and the fiscal path may become a little clearer or muddier this week with events in Congress in full swing. In short without a continuing resolution or the Democrats passing through their FY 2022 reconciliation package, the federal government will go into a partial shutdown on October 1st. The Dems plan to hold a vote on the $1.2trn bi-partisan infrastructure package (already passed by the Senate in August) on September 27 and simultaneously hold a vote on a short-term continuing resolution (CR) to fund the government through the October 1 deadline for the start of the new fiscal year. House majority leader Hoyer implied that one of the two planned votes would include legislation to address the debt ceiling, which will most likely need to be dealt with by the second half of October in order to avoid the possibility of a technical default. So a pretty complex picture and one full of brinkmanship on both sides. Senate Minority Leader McConnell has vowed not to vote to suspend the debt ceiling but may accept a short-term one which may force the Democrats to raise the debt ceiling through a party-line vote via their FY 2022 reconciliation package. However, the progressive wing of the Democrat Party in the House might vote against the bi-partisan package if it is not firmly tied to the more expansive reconciliation bill. So a couple of weeks of high intrigue in Washington.

Back to the week ahead where we also get meetings from the BoJ and BoE, although neither are expected to do too much with the BoE a little more interesting in terms of forward guidance in terms of possible tightening needed next year.

Today’s curiosity will be the Canadian election. Incumbent Prime Minister Justin Trudeau called an early election seeking to regain the majority in the Canadian House of Commons that his party lost in the 2019 election. However, since he did, the polls have narrowed substantially, with CBC News’ polling average putting Trudeau’s Liberals on 31.5%, just narrowly ahead of the opposition Conservatives on 31.0%. According to their model, the Liberals have only a 17% chance of regaining a majority, with the most likely outcome (given a 57% probability) that they’re still the largest party but falling short of the 170 seats needed. 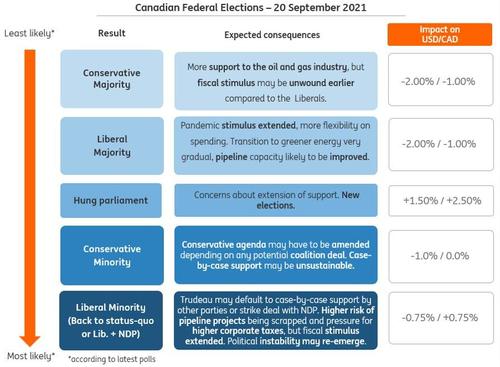 The other main election in focus will be Germany’s, which has important implications for not just domestic but also EU policy. That’s not taking place until Sunday but we’re heading into the last full week of the campaign, with the candidates from the Bundestag parties set to take part in a final TV debate on Thursday. The polls have actually been remarkably stable over the last couple of weeks, having gone through some big shifts over recent months, and Politico’s Poll of Polls puts the centre-left SPD in the lead with 26%, ahead of Chancellor Merkel’s CDU/CSU bloc on 21%, and the Greens trailing on 16%.

Elsewhere on the political scene, there’s an important Quad Summit taking place at the White House on Friday, featuring President Biden along with the Prime Ministers of Australia, India and Japan. The statement from the White House said that the leaders would focus “on deepening our ties and advancing practical cooperation on areas such as combatting COVID-19, addressing the climate crisis, partnering on emerging technologies and cyberspace, and promoting a free and open Indo-Pacific.” That summit follows the announcement this week of a new security partnership between the US, UK and Australia, named AUKUS, which will see Australia obtain a nuclear-powered submarine fleet. On Friday night the implications of this reverberated with France recalling It’s ambassadors from the US and Australia over the Australian cancellation of a submarine contract with the French that was associated with this deal.

Finally on the data front, this Thursday will see the release of the flash PMIs for September, which will offer an indication of how the global economy has fared towards the end of Q3. Back in August, the composite PMIs showed a deterioration from their July levels across the key economies, including the Euro Area, US, UK and Japan, so it’ll be interesting to see if that deceleration in growth momentum continues. Alongside those, the Ifo’s business climate indicator from Germany will be released on Friday. 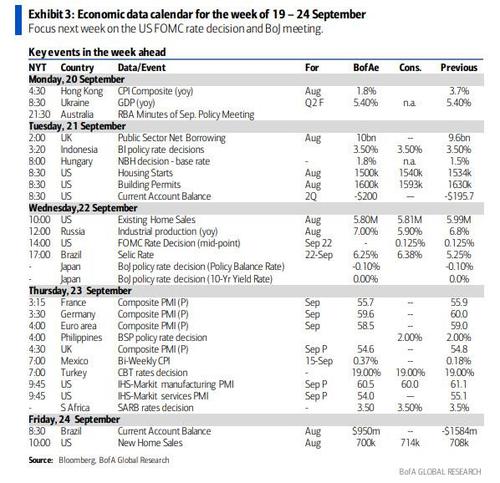 Courtesy of DB, gere is a day-by-day calendar of the week’s events

Finally, focusing on just the US, Goldman writes the key economic data release this week is the jobless claims report on Thursday. The September FOMC meeting is this week, with the release of the statement at 2:00 PM ET on Wednesday, followed by Chair Powell’s press conference at 2:30 PM. There are no other major speaking engagements from Fed officials this week, reflecting the FOMC blackout period.