Gunmen opened fire on a vehicle occupied by the top adviser to President Volodymyr Zelensky of Ukraine on Wednesday in what authorities deemed an “assassination attempt,” according to AFP.

Sergiy Shefir,57, the first assistant advisor to Zelensky, was unscathed this morning after a hail of 7.62 caliber rounds fired from automatic weapons penetrated his unarmoured Audi A8L. However, his driver was seriously injured. 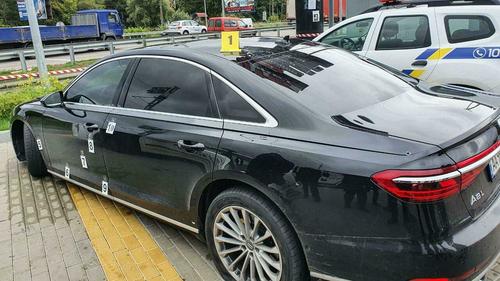 Speaking with journalists after the incident, Shefir said the attack was intended to spook senior policymakers. “All I can say is that the assassination attempt was carried out to intimidate the highest echelon of power,” he said.

He explained more details about what happened: “We were driving when, suddenly, shots rang out. They wounded the driver, who was amazing and carried on driving. We sped up a bit. It was a scary moment. I immediately called the police and the interior minister.”

Shefir went on to say the incident will not intimidate the president, calling him a “very strong-willed and decisive person.”

Zelensky was in New York City at the time of the incident holding meetings at the United Nations. Shortly after he was briefed on the shooting, he issued a statement condemning the attack and said he would fly back to Kiev this evening.

One of Zelensky’s aides said the attack was an attempt to “demonstrably kill a key member of the team.”

Another presidential advisor, Mykhailo Podolyak, said the attack was in response to “politics directed at limiting the traditional influence of shadowy oligarchs.”

So far, the assailants’ identity is unknown, and there’s a lot of finger-pointing within Zelensky’s party. Some have blamed Moscow, smugglers, and crime bosses, while others have said it’s too early to blame who is responsible. However, there’s agreement within the party that the attack was meant to destabilize the country’s political situation.