“Fill The Swamp”: The Federal Administrative State Grew Even Under Trump

“Fill The Swamp”: The Federal Administrative State Grew Even Under Trump

By Adam Andrzejewski, CEO/Founder of OpenTheBooks.com originally posted at Forbes,

Everyone from Ronald Reagan (1983) to Nancy Pelosi (2006) to Donald Trump (2016) issued calls to “drain the swamp.” However, in a new oversight report by OpenTheBooks.com, Mapping The Swamp, A Study Of The Administrative State, we found that the federal agency payrolls continued to grow unabated.

President Trump was holding the headcount of the executive agencies roughly flat through at least 2018. Then, the pandemic driven spending caused a massive federal hiring spree in FY2020. 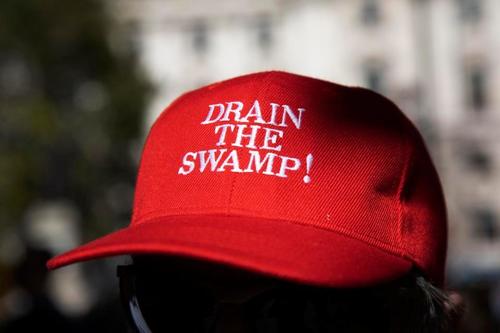 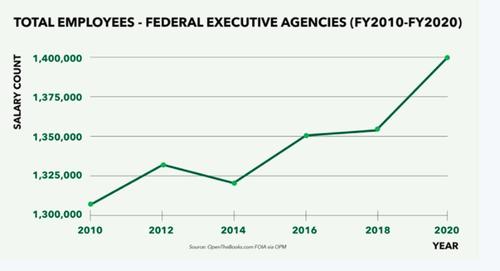 5. PAID TO STAY HOME: 44-days of paid-time off (PTO) on average for bureaucrats employed in the executive agencies (non DOD and USPS) – 11 holidays, 13 sick days, and 20 vacation days. The estimated taxpayer subsidy of this benefit is $22 billion annually.

6. THE $15 MILLION MAN: The Tennessee Valley Authority (TVA), a quasi-public federal agency, paid their CEO Jeffry Lyash $15.5 million in salary, retirement and other benefits over a two-year period, FY2019-FY2020. The TVA is a federal entity, but doesn’t currently receive taxpayer funding.

8. BLOATED WHITE HOUSE PAYROLL: The Biden White House is the most expensive in history with over 560 employees and $50 million annual payroll expense. By comparison, President Trump employed 377 staffers with an inflation adjusted $40 million payroll in his first year (2017).

9. ARMED BUREAUCRATS: Federal employees (non-DOD) with firearm authority (200,000+) now exceeds the number of U.S. Marines (186,000). Employees in 103 agencies with firearm authority include 69,000 at Department of Justice; 63,000 at Homeland Security; and even 4,547 police officers at Veterans Affairs and 2,159 special agents at the Internal Revenue Service.

10. TRANSPARENCY PROBLEMS: 259,000 names were redacted accounting for an estimated $25 billion in cash compensation within the executive agency payroll (non DOD and USPS). The number of redactions grew from 3,500 in FY2016. Department of Defense: only disclosed the 698,547 civilian employees with salary, title and branch, but redacted all names. The U.S. Post Office disclosed 678,537 employees, but redacted all bonuses.

In addition, another $225 billion in estimated compensation remains hidden and not subject to the oversight of this report: an estimated $100 billion in non-disclosed salaries of the 1,379,800 million active military members; and another $125 billion in undisclosed pension-retirement annuity payouts.