The United Kingdom is short 100,000 qualified truck drivers after tens of thousands of them returned to the European Union during Brexit, and 40,000 heavy goods vehicle (HGV) driver tests were suspended because of the virus pandemic in 2020. The lack of drivers has roiled supply chains, resulting in higher logistical costs that could make the price of food and anything else hauled by trucks more expensive ahead of the holiday season.

The “Winter of Discontent” is starting to become a reality for millions across the world’s fifth-largest economy as a deficit of truckers triggered widespread fuel shortages this week. There’s also been a shortage of natural gas from Russia that has pushed UK wholesale natgas prices to record highs has transformed the country’s power industry into a chaotic mess. Soaring prices and shortages are reminiscent of the late 1970s and may worsen in the months ahead.

The government announced Sunday temporary visas for 5,000 foreign truck drivers to alleviate extremely stressed supply chains, but that may be a hard task to fulfill considering the deficit is so wide. Truckers who spoke with Reuters said their wages are going up because they’re in high demand, and in return, the cost of everything will rise as well. 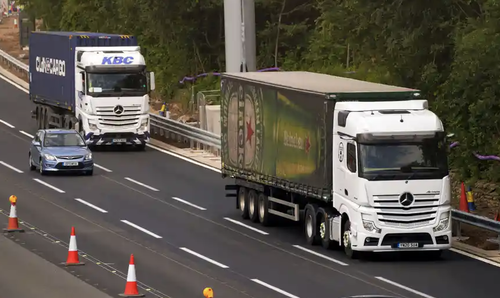 Hauler and recruitment companies are struggling to fill the deficit. One online job posting offered 75,000 pounds ($102,500) per annum salary for HGV Class 1 drivers.

“With HGV drivers, we’re now paying them 40% more than we were four months ago,” said Jordan Francis, the commercial director of recruitment agency ProDrive.

Holness doesn’t believe the trucker shortage will abate anytime soon because the deficit is so large. He said no young person wants to do this job because the conditions are poor.

“Who wants to be a lorry driver – you’d be better tapping away on a keyboard wouldn’t you? Kids these days don’t want to know,” said Holness. “I want to get out.”

Miguel Brunel,41, a truck driver from Bethune in northern France, said, “this is chaos,” while referring to the deficit of drivers in the UK.

The British Retail Consortium, the retail industry’s lobby group, told the government last week that new HGV drivers need to be found in the next ten days to avoid significant disruption in the run-up to Christmas.

“HGV drivers are the glue that hold our supply chains together,” the retail group said. “Without them, we are unable to move goods from farms to warehouses to shops.”

From turkeys, toys, and trees this upcoming holiday season, millions of Brits could be in for a price shock or at least some kind of disappointment as supplies could be exhausted.

This could be problematic for Bank of England Governor Andrew Bailey who said this week that he’s laser-focused on the inflationary effects from supply shortages including labor.