Tesla shares are up about 3% in premarket trading on Monday after the electric vehicle maker announced that its Q3 delivery numbers beat expectations over the weekend.

And short sellers are starting to give up on the name, Bloomberg noted Monday morning.

Tesla stock borrowed by traders is now just 1.1% of Tesla’s float, the lowest number it has been since the automaker went public.

Recall, this weekend, we reported that even though the company’s relationship with Beijing has been under the microscope for the better part of 2021, Tesla was still able to report record deliveries for Q3 2021. Almost all of the deliveries came from the company’s Model 3 and Model Y vehicles, as its Model X and Model S sales continue to phase out.

The automaker delivered 241,300 cars worldwide, beating both the company’s previous record of 201,250 and consensus estimates for the quarter, which were at 223,667.

The number also beat the average projection of 221,952 that Tesla provided to its investors.

After announcing the numbers on Saturday, Tesla stated: “We would like to thank our customers for their patience as we work through global supply chain and logistics challenges.” 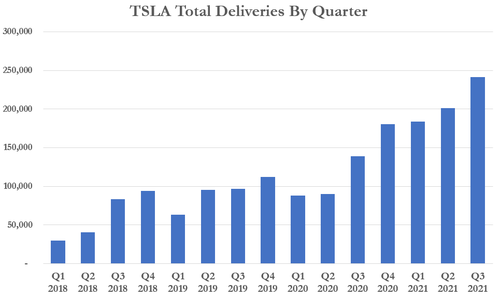 A meaningful portion of Tesla’s production comes from China, where Elon Musk’s relationship with the government has been tense at times. However, over the last few months, Musk has spoken at several Chinese technology conferences and has praised the country for its advances in technology and electric vehicles.

Tesla’s Q3 numbers stack up well when compared to competitors like General Motors, who we noted at the end of last week, saw its sales plunge.

Wedbush’s Dan Ives, apparently still not worried too much about consistent cash flow, called the delivery numbers “a major feather in the cap for the bulls.”

“While there are many competitors in the EV space, Tesla continues to dominate market share as evidenced again this quarter while battling through the chip shortage,” Ives wrote.

But with an ever-evolving EV landscape, legacy automakers gobbling up marketshare, Tesla’s relationship with China still shaky, and a higher stock price making for a more enticing entrance, shorts may not have given up on the name for good.