Dear NIH Director Collins: Before You Step Down, We Have Just One Question

Dear NIH Director Collins: Before You Step Down, We Have Just One Question

The director of the National Institutes of Health, Dr. Francis S. Collins, said he would step down by the end of the year, having led the research center for 12 years and becoming a prominent source of public information during the coronavirus pandemic. A formal announcement was expected Tuesday from the NIH. Politico reported Collins’ plans Monday night. While news of Collins’ departure was a surprise, Politico reported that the move had been in the works for some time.

“There comes a time where an institution like NIH really benefits from new vision, new leadership,” Collins, 71, said in an interview with The Washington Post. “This was the right timing.”

In the interview with the Post, Collins said he had decided not to stay too long into the Biden administration and was confident that the NIH’s role in developing therapeutics, tests and vaccines for the coronavirus had reached “a pretty stable place.”

Based in Bethesda, Maryland, and a part of the Department of Health and Human Services, the NIH is the nation’s medical research agency and operates more than two dozen institutes and centers. It lays claim to being the largest supporter of biomedical research in the world. In recent years this apparently also included offshoring gain of function virus research to Wuhan after it was banned in the US.

The 71-year-old Collins was appointed director in 2009 by President Barack Obama and was asked to remain in that post by Presidents Donald Trump and Joe Biden. He is the only presidentially appointed NIH director to serve under multiple administrations, and is the longest-serving NIH director. Previously, Collins served as director of NIH’s National Human Genome Research Institute from 1993-2008 and led the international Human Genome Project, which in 2003 completed a finished sequence of human DNA.

During the coronavirus pandemic, Collins has been on the front lines urging Americans to wear masks and get vaccinated. While Anthony Fauci, the nation’s top infectious disease expert and President Joe Biden’s chief medical adviser, became the most visible advocate for the administration’s vaccination efforts, the Biden administration has increasingly put Collins on network shows to urge vaccinations and defend the booster strategy as Fauci’s credibility eroded.

“This is the way it ought to be,” Collins said about the Food and Drug Administration’s decision late last month to limit boosters to certain vulnerable populations for now, despite the Biden administration’s pledge that boosters would launch broadly by Sept. 20. “Science sort of playing out in a very transparent way, looking at the data coming from multiple places, our country, other countries, and trying to make the best decision for right now,” he said on CBS’ “Face the Nation.”

Collins has spoken at length about his conversion from atheism to Christianity and penned a book in 2006 called “The Language of God: A Scientist Presents Evidence for Belief.” A year later, he founded The BioLogos Foundation, a group that aims to reconcile religion and science and argues that God created the world through evolution.

During his tenure, Collins drew the ire of anti-abortion groups that opposed his support of using fetal tissue in medical research, but emerged politically unscathed. A popular figure on Capitol Hill, Collins has also made efforts to reach out to the religious community throughout his career, which continued during the Covid-19 pandemic.

“For somebody who’s a believer, this is what you could call an answer to prayer,” he told Religion News Service last month, in reference to the coronavirus vaccine. “If we’ve all been praying to God to somehow deliver us from this terrible pandemic, and what happens is these vaccines get developed that are safe and effective, well, why wouldn’t you want to say, ‘Thank you, God’ and roll up your sleeve?”

Whether god is behind the vaccine we’ll leave to the theologians, but we know one thing: the monetary benefits from it fall square in the laps of Pfizer and Moderna, two companies which have demonstrated an understandable lack of willingness to part with the generous cashflow stream.

But more importantly, we have one question for Dr. Collins: back on February 2, when the public awareness about the covid pandemic was only starting to emerge, and one day before zerohedge was banned on Twitter and subsequently from various other social networks at great financial cost to this organization, we pointed out that in the days when the NIH was setting the original narrative for the Covid pandemic meant for public consumption, an email from British medial researcher, Sir Jeremy Ferrar, to Collins and Fauci notified the head of the NIH and his lackey that top World Health Organization Director-General Tedros Adhanom Ghebreyesus and his “Special Strategic Advisor” Bernhard Schwartländer “have apparently gone into conclave” adding that “if they do prevaricate” which of course is a politically correct synonym for “lie”, Ferrar said he would appreciate a call from Fauci or Collins “to think how we might take forward.”

But the punchline was a reference to Zerohedge link discussing the possibility that the China created virus may contain HIV insertions, stoking fears over an artificially created bioweapon.

And courtesy of the FOIA’ed email, we know that later that day, Fauci sought to have a “quick call” with Collins, the same day we were banned on twitter.

So before you retire Dr Collins, we have just one question: what did you and Anthony Fauci discuss on that February 2, 2020 call? 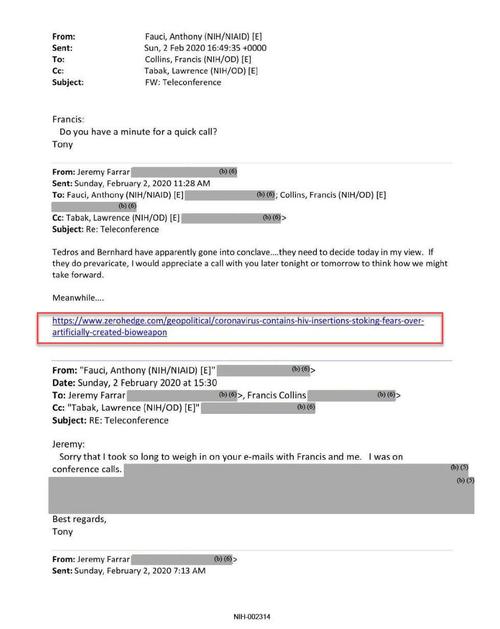 This, of course, is not the first time we have asked: we did first back in June when it first emerged that Collins was part of the team shaping public opinion on covid.

We ask again, however, in light of the recent shocking discovery that Peter Daszak’s EcoHealth Alliance used federal money to fund bat coronavirus research at the Wuhan lab in China, and that at least two previously unpublished grant proposals (namely “Understanding the Risk of Bat Coronavirus Emergence,” and “Understanding Risk of Zoonotic Virus Emergence in Emerging Infectious Disease Hotspots of Southeast Asia,” ) were funded by the National Institute of Allergy and Infectious Diseases, whose parent organization is Collins’ own NIH. The first grant was funded at a time when virus gain of function research was expressly banned by the Obama administration in 2014. The second grant was awarded in August 2020 and extends through 2025. The proposal, written in 2019, seems prescient, focusing on scaling up and deploying resources in Asia in case of an outbreak of an “emergent infectious disease” and referring to Asia as “this hottest of the EID hotspots.”