Ruth Bader Ginsburg said that athletes kneeling for the national anthem were being ‘dumb and disrespectful,’ and showed ‘contempt for a government that has made it possible for their parents and grandparents to live a decent life,’ when asked what she thought about former 49ers quarterback Colin Kaepernick and others protesting before games. 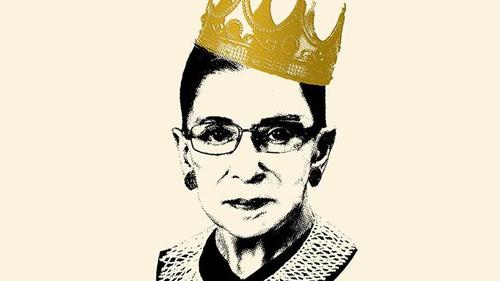 “Would I arrest them for doing it? No,” said Ginsburg. “I think it’s dumb and disrespectful. I would have the same answer if you asked me about flag burning. I think it’s a terrible thing to do, but I wouldn’t lock a person up for doing it. I would point out how ridiculous it seems to me to do such an act.”

But the American public never knew about this controversial opinion from the liberal icon, because Katie Couric edited it out of a 2016 interview with the late Supreme Court justice, according to the Daily Mail. “If they want to be arrogant, there’s no law that prevents them from that. What I would do is strongly take issue with the point of view that they are expressing when they do that,” Ginsburg added.

The next day, the Supreme Court’s head of public affairs emailed Couric to say that Ginsburg had “misspoken” and demanded its removal.

RGB’s opinion – which perhaps could have quelled the racial division brewing in America during the 2016 US election, is revealed in Couric’s upcoming book, set for release on October 26.

… she faced a ‘conundrum’ when Ginsburg made comments about Colin Kaepernick, the former NFL player who became the controversial figurehead behind the national anthem protest against racial injustice.

Couric felt that when Ginsburg said that people like Kaepernick were ‘dumb and disrespectful’ they were comments that were ‘unworthy of a crusader for equality’ like the liberal Supreme Court justice.

The day after the sit-down, the head of public affairs for the Supreme Court emailed Couric to say the late justice had ‘misspoken’ and asked that it be removed from the story.

Couric writes that she was ‘conflicted’ because she was a ‘big RBG fan’, referring to Ginsburg’s moniker. -Daily Mail

Aiding Couric’s decision not to report Ginsburg’s opinion was NYT journalist David Brooks, who advised Couric that Ginsburg – who was rendering opinions on matters of national importance at the time – ‘probably didn’t understand the question.’

“She’s on the Supreme Court. People should hear what she thinks,” he said.

Couric claims she simply ‘wanted to protect’ Ginsburg – and that the topic of racial justice was a ‘blind spot’ for her.