Is The Risk Of A Bigger Correction Over?

Is The Risk Of A Bigger Correction Over?

s the risk of a more significant correction over now that the expected 5% decline is complete? That was a hotly debated question after this past weekend’s newsletter supporting the idea of a reflexive rally into year-end. As I stated:

“After a harrowing 5% decline, sentiment is now highly negative, supporting a counter-trend rally in the markets. Thus, we think there is a tradeable opportunity between now and the end of the year. But, as we will discuss below, significant headwinds continue to accrue, suggesting higher volatility in the future.“

That comment sparked numerous debates over market outlooks through year-end. To wit:

So, who is right? A hard rally into the end of the year, or a major low?

While we certainly hope for the former, some risks support a further correction on both a fundamental and technical basis.

In Andrew’s comment, he suggests that economic growth will accelerate through the end of the year. If such is the case, that will support a pick up in earnings growth and outlooks that would bolster higher asset prices.

The problem with that view is two-fold. 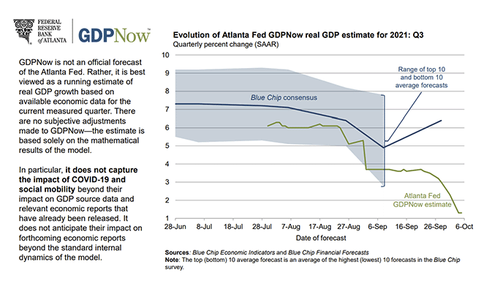 As we discussed in “The Coming Reversion To The Mean,” the “second derivative” effect of economic growth is manifesting itself. To wit:

“We are at that point in the recovery cycle. Over the next few quarters, the year-over-year comparisons will become much more challenging. Q2-2021 will likely mark the peak of the economic recovery.“ – 09/24/21

When writing that blog, our estimates were for a cut in growth to 3.9%. We are currently closer to 1%.

The last point is the most problematic. The massive surge in economic growth in 2020 was a direct function of the massive direct fiscal injections into households. With that support gone, economic growth will revert to normality, particularly in an environment where wage growth does not keep up with inflation. 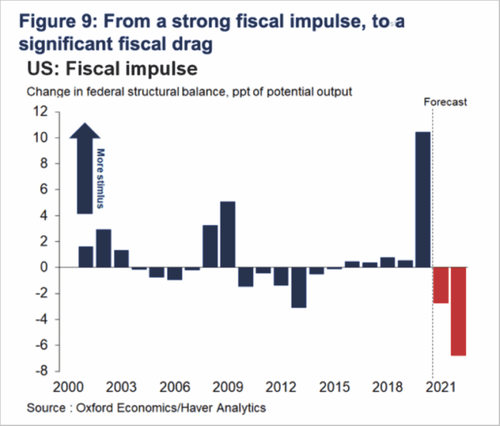 Given that earnings and revenue are a function of economic growth, the most considerable risk to Andrew’s fundamental view is slower growth and valuations. 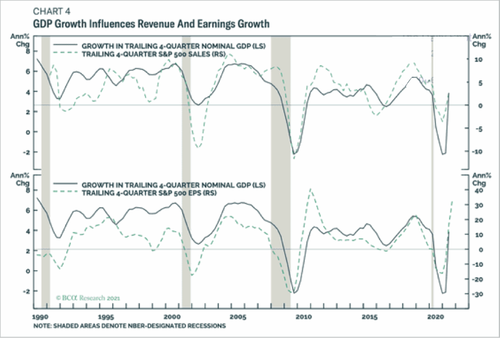 When discussing the market, distinguishing time frames becomes critically important. As noted in the newsletter, we suggested the market got oversold enough short-term to elicit a rally.

The rally above the 100-dma and the trigger of both M.A.C.D. “buy signals” (lower panels) are supportive of a short-term rally over the next few days to weeks.

However, the sell-off yesterday is retesting that 100-dma and will turn it into important support if it holds through the end of the week. If not, we are going to challenge the recent lows.

It is not uncommon to see such counter-trend rallies, even powerful ones, during a longer-term corrective process. Such is an important consideration given the weekly “sell signals.”

The recent decline triggered both signals for the first time since the March 2020 correction. (The chart below is the same model we use to manage 401k allocations. You can see therelated models and analysis here)

Since 2006, when we developed and started publishing this “risk management model” each week, the signals continue to signal critical periods for investors to watch. Market returns have a very high correlation to the confirmed “buy” or “sell” triggers.

There are also two other important points. First, the current signals are occurring at elevations we have never witnessed previously. Secondly, the confirmed signals are happening with the market at the top of its long-term bullish trend from the 2009 lows. Thus, a correction to the bottom of that long-term bullish trend channel will encompass a nearly 30% decline without violating the bullish uptrend.

Again, even with the broader macro issues facing the market, we can not dismiss the possibility of a near-term reflexive rally. However, the monthly signals are also confirming the weekly alerts.

Monthly “sell signals” are more rate and tend to align with market corrections and bear markets. However, like the confirmed weekly signals above, the monthly “sell signal” was triggered for the first time since March 2020.

While the longer-term M.A.C.D. has not yet confirmed that monthly signal, it is worth paying close attention to. Historically, the monthly signals have proven helpful in navigating correction periods and bear markets.

Let me reiterate these longer-term signals do not negate the possibility of a counter-trend bull rally. As noted, in the short term, the market is oversold enough for such to occur.

On the surface, it seems like “bull markets” are extremely difficult to kill as they keep rising despite the increasing number of warnings suggesting differently.

If you have ever witnessed a bullfight, the bull will keep charging the matador even though it has been continually impaled. However, even though the bull keeps trying to get his antagonist, it begins to slow from exhaustion and blood loss until the final blow gets dealt.

Bull markets are much the same. The advance will continue until it becomes exhausted, which is why it seems like bull markets end “slowly and then all at once.”

Currently, numerous internal technical and fundamental measures are providing warnings that investors are currently ignoring because the “bull is continuing to charge the matador.”

Such is why it is essential to align time frames with your portfolio management process.

If you are trading your portfolio with a relatively short holding period, you want to focus on hourly to daily charts. Currently, those suggest a near-term rally is possible.

However, if you employ a longer-term “buy and hold” type philosophy, you will want to pay attention to the longer-term charts. Those suggest the risk of a more substantial correction is increasing.

These longer-term signals suggest investors should be using such rallies to rebalance portfolio risks, raising some cash, adding hedges, and reducing overall portfolio volatility. Our best guess is that we are still in the midst of a short-term, sentiment (F.O.M.O.) driven bull market.

While it is entirely possible we could see the market rally back towards its previous highs before year-end, you need to decide if you want to be the “bull“ or the “matador” when it comes to your portfolio.

The “matador” walks out of the arena more often than not while the “bull” gets carried out.