Albert Edwards: We Should Start Worrying About The Coming Recession

Albert Edwards: We Should Start Worrying About The Coming Recession

One week ago, when looking at the surge in commodity prices, SocGen’s Albert Edwards pointed out the eerie similarities between what was taking place in the energy sector today and crude prices in the summer of 2008 – right before Lehman collapsed – and said that “it’s starting to fell a bit like July 2008.” That prompted him to tell readers to “think hard about the likelihood that higher energy prices and bond yields will trigger a ‘wholly unexpected’ recession. For that is where the biggest risk might lie for investors.”

It will hardly come as a surprise that, one week later, with more banks slashing their GDP forecasts (like Goldman) even as they hike their inflation forecasts (also like Goldman), the odds of a stagflationary recession keep rising, and sure enough in his latest note published today, Edwards finds another indicator suggesting that a recession may now be inevitable, and imminent. Pointing to the latest NFIB small business survey, the SocGen strategist first notes what even the Fed now knows, namely that wage pressures are stepping up to a new record high, making what may one have been transitory inflation fully permanent. But it is the chart on the right which is more troubling: it shows companies’ net % balance of those expecting a stronger or weaker economy. As Edwards notes, “this series has now fallen to levels where we should be worrying about recession. Last week we mused that near term recession risk was being underestimated. Maybe that’s what we should be really vigilant about?“

It’s not just small business sentiment that is going haywire: pretty much everything in China is as well. According to Edwards, in addition to the impact on foreign investors resulting from the new policy of “common prosperity” and whether Chinese equities and bonds have become “uninvestable”, but the tremendous macro uncertainty regarding China’s own energy crisis and collapse in property transactions – which we discussed extensively last Friday – that is a major concern.

The SocGen permabear also refers to two charts from the latest IMF Financial Stability Report, both of which address a point we have frequently made, namely that in the past it was always China’s massive credit expansion that pulled the world out of the economic dumps. This time, however, no such thing is happening. To wit, the chart on the left shows how much more restrictive Chinese financial conditions are now relative to the west “in stark contrast to the post-2008 GFC when China was the engine of global recovery” which is shown on the right.

As for what China’s current “financial conditions” tightness means for the future, we refer readers that what we discussed at the end of 2020 when we first warned that China’s credit impulse was sliding. Edwards, who also is a firm believer in China’s credit impulse as the key driver of reflationary (or deflationary) global flows points out that that IMF has also jumped onboard the “credit impulse thesis” and after “highlighting China’s crunch in financial conditions for some months now, it is nice to get confirmation from the IMF!” As for what it means in practical terms, one look at the charts below should concern everyone.

To be sure, in a world where energy prices are hyperinflating, no Edwards note would be complete without some discussion of inflation and sure enough, this time he touches on the latest commodity to see prices surge, fertilizer… 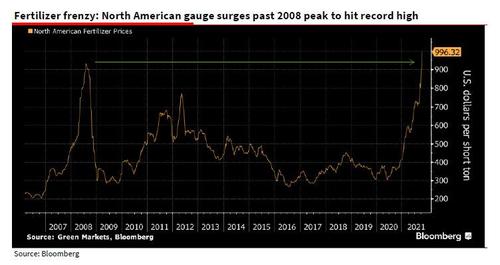 … and even though foodstuffs like soyabeans are well off their recent highs, overall agricultural and industrial commodity indices remain at or close to all-time highs.

Edwards concludes not with some dire fire and brimstone forecast, as he does on occasion, but by giving the microphone to the IMF. As Edwards notes, “in its twice yearly financial stability report, the IMF called on central banks to be “very, very vigilant” and take early action to tighten monetary policy should price pressures prove persistent … The IMF also highlighted the “challenging trade-off” facing central banks. They want to support the economic recovery from the coronavirus pandemic by keeping interest rates low, but they also need to keep financial risk-taking in check amid “overly stretched” asset valuations.”

We wish them the best of luck as they seek to navigate the impossible journey between a world struggling with permanent inflation on one hand (made far worse due to the Fed’s chronic inability to observe what was obvious to most a year ago), and a market  – and global economy – that is completely reliant on massive Fed liquidity injections, and where the smallest hiccup to record easy financial conditions could lead to an immediate market crash.