When JPMorgan kicked off Q3 earnings yesterday, investor ignored the solid top-line results driven by a surge in advisory and ibanking revenue, and instead were more concerned by the latest decline in consumer and commercial loans and the drop in FICC trading. Would Bank of America follow the same fate when it reported results today?

Moments ago BofA reported Q3 earnings which like JPM beat on the top and bottom line, to wit: 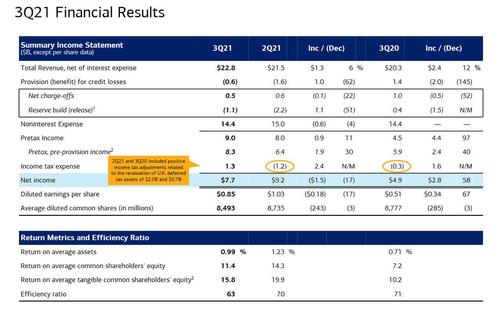 Similar to JPM, BofA’s benefited from a $1.1BN reserve release, a sharp reversal from the $0.4BN reserve build a year ago; it consisted of a $624MM benefit from credit losses vs. a provision of $1.39 billion year earlier and was sharply higher than the estimated recovery $175.2 million; Charge offs in Q3 amounted to just $0.5BN, half the amount a year ago. 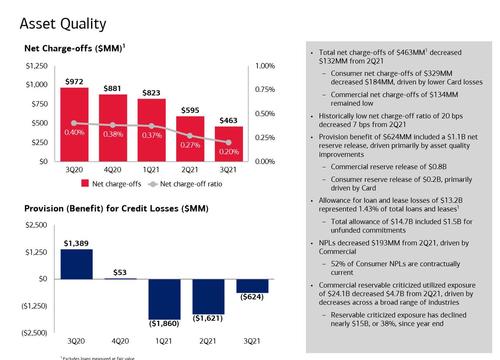 On the expense side, noninterest expense of $14.4B declined $0.6B, or 4%, from 2Q21, and was relatively flat YoY. The bank’s efficiency ratio was 63% with operating leverage of approximately 1,200 bps.

CEO Brian Moynihan reiterated optimistic macro views: “We reported strong results as the economy continued to improve and our businesses regained the organic customer growth momentum we saw before the pandemic. Deposit growth was strong and loan balances increased for the second consecutive quarter, leading to an improvement in net interest income even as interest rates remained low.”

Drilling down on the income statement first, we find that just like JPM, BofA benefits from a surge in capital markets advisory activity even as the bank’s result were also boosted from stronger than expected trading resulits:

While revenue were sharply higher, expenses rose just 5% to $3.3B driven by higher activity-based expenses. Finally, despite the increase in results, Q3’s average VaR was $78MM, far below the $109 a year ago. 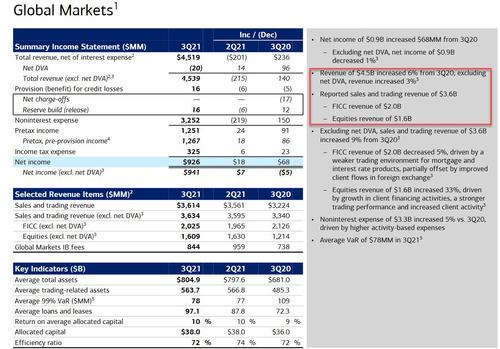 BofA said that its global markets is on course for its best revenue performance in more than four years: Total sales and trading revenues currently stand at $12.3 billion, up $200 million year-on-year driven by the equities business.

While capital markets were solid, it was another record print for advisory revenues after JPMorgan’s numbers yesterday. Bank of America’s advisory fee haul jumped 65% in the third quarter to an all-time high of $654 million.

Some more details: total banking revenue of $5.2B increased $0.7B vs. 3Q20, “reflecting higher investment banking fees, higher leasing-related revenue, and strong deposit growth, which benefited NII. Total investment banking fees of $2.2B (excl. self-led) rose $400 million, or 23%, from 3Q20.” As BofA notes, Q3 was the second best quarter for firm-wide fees post- merger, after 1Q21. Of course, bigger investment banking revenues means bigger bonuses for bankers. Non-interest expenses grew 7% in global banking to $2.5 billion in the quarter, which was “largely driven by higher revenue-related costs and continued investments in the franchise.” 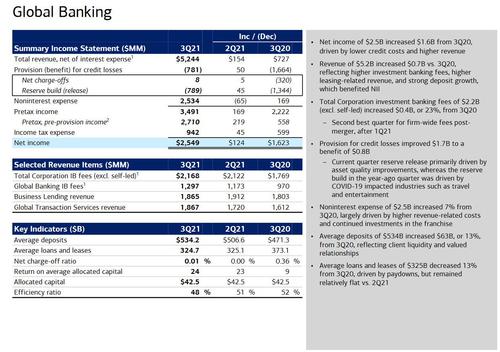 As with JPM, BofA is investing actively in fintech and digital adoption and the following slide summarized its latest progress here: 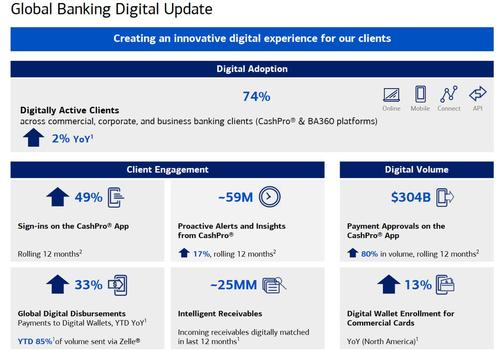 Eslewhere, America looks reported revenue from wealth and investment management – an area where many of the world’s biggest banks are trying to boost business at the moment – reached a record $5.3 billion, up 17% year-on-year. Client balances, too, are at an all-time high of $3.7 trillion, a 6% increase driven by rising market valuations and strong inflows of funds.

Stepping away from the Income Statement, BofA was a standout performer when it comes to its balance sheet, where it did manage to scratch out some loan growth in the quarter. The average loans and leases in its business segments rose to $903 billion, a 1.6% increase from the second quarter. It remains to be seen if that’s enough to please analysts and investors. 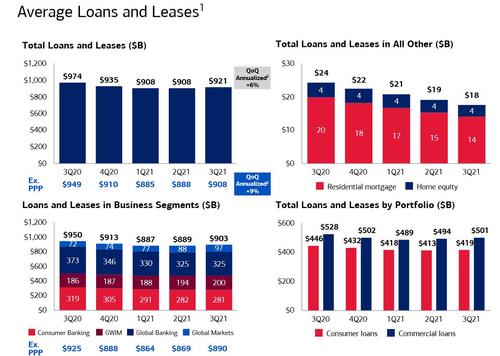 In a separate positive sign, Bloomberg points to the credit card business which looks like it may have turned a corner. Average outstanding balances were up about 3% from the second quarter, to $75.6 billion. That’s the first quarter-over-quarter gain since before the pandemic.

And here is another reason for shares to rally: unlike JPM, BofA net interest yield not only rose but was better-than-anticipated (BofA is regarded as a particularly interest-rate sensitive bank). Net interest yield of 1.68% rose 7 basis points from the second quarter, beating an estimate of 1.63%. Net interest income of $11.1B ($11.2B FTE) – increased $861MM from 2Q21 or 8.4%, “driven by deposit growth and related investment of liquidity, higher PPP NII due to loan forgiveness, lower premium amortization expense, higher loan balances, and one additional accrual day.” The bank estimates (as of September 30) that a positive 100 bps parallel shift in the yield curve would benefit net interest income by $7.2 billion over the next 12 months. 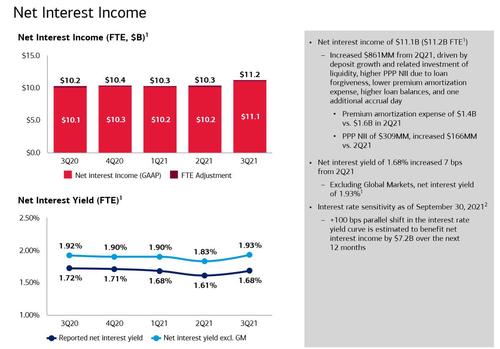 Bottom line, in a nearless flawless report, which unlike JPM saw growth across all loan segments and beat on Net Interest Income, Bank of America beat analysts’ earnings estimates as advisory fees soared, boosted by a record-breaking period for mergers and acquisitions. Investment-banking advisory fees rose 65% to $654 million in the third quarter as firms leaned on Bank of America to handle their debt and equity financing, and a combination of cheap financing for buyers and attractive valuations for sellers spurred a wave of takeovers.

And so, when looking at the blowout Q3 report which included record advisory fees, stronger (and rising) NIM and loan growth, iut’s not surprising to see BofA stock surging in the premarket, a far more forceful response than JPM’s steady leak on Wednesday. 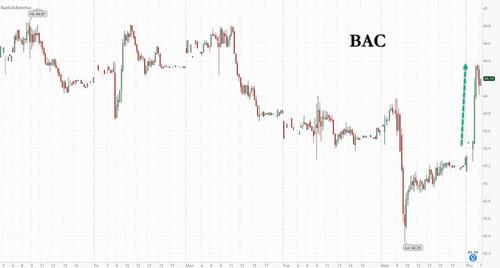 The Presentation Materials(1) by Zerohedge on Scribd