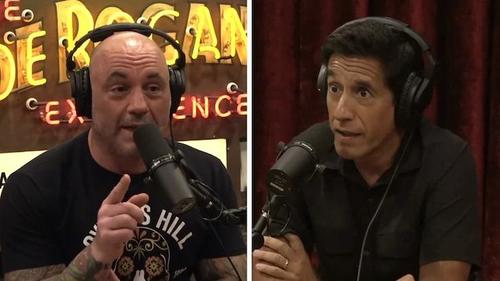 During the exchange, Gupta conceded that his network’s framing of Ivermectin, a widely-prescribed anti-parasitic which has shown tremendous efficacy in treating Covid-19, was wrong.

“Calling it a horse de-wormer is not the most flattering thing, I get that,” said Gupta.

“It’s a lie on a news network – and it’s a lie that they’re conscious of. It’s not a mistake. They’re unfavorably framing it as veterinary medicine,” Rogan shot back.

“Why would you say that when you’re talking about a drug that’s been given out to billions and billions of people? A drug that was responsible for one of the inventors winning the Nobel Prize in 2015?” the 54-year-old Rogan continued.

“A drug that has been shown to stop viral replication in vitro – you know that, right? Why would they lie and say that’s horse de-wormer? I can afford people medicine, motherfucker. This is ridiculous.”

Joe Rogan asks Sanjay Gupta if it bothers him that CNN outright lied about Rogan taking horse dewormer to recover from covid. This is fantastic: pic.twitter.com/PEgJqIXhSD

Now that CNN’s resident medical expert has corrected this, perhaps @Acosta would like to as well.

But corporate media outlets do exactly the same — as a model, on purpose — and it’s far more damaging because their platform is bigger.

This is not hyperbole: in the liberal sector of the corporate media — by far the largest and most dominant wing — lying and disinformation are not prohibited or even frowned up. It’s encouraged and rewarded, as long as it’s directed at the ideological enemies of their audience.

This is why there is no higher priority for liberal corporate outlets – literally no higher priority – than inducing more and more internet censorship. They want to silence the independent voices documenting their lies, and eliminate all competitors to create a captive audience.

That Rogan clip I posted above — from an anonymous small Twitter account — already has 1.8 million views. The real number is way higher since others also posted it. It’s been years since CNN got anywhere close to 1.8 million watching their network. Therein lies the desperation.

Meanwhile, as we noted last month regarding Ivermectin (and worth repeating):

This widely prescribed anti-parasitic which is also used in horses has shown massive efficacy worldwide in the treatment of mild and moderate cases of Covid-19, plus as a prophylactic. India’s Uttar Pradesh province, with a population of over 200 million, says that widespread early use of Ivermectin ‘helped keep positivity [and] deaths low.’

Separately, there have been several studies funded by the Indian government, primarily conducted through their largest govt. public medical university (AIIMS).

Conclusion: Two-dose ivermectin prophylaxis at a dose of 300 μg/kg with a gap of 72 hours was associated with a 73% reduction of SARS-CoV-2 infection among healthcare workers for the following month.

Conclusion: There was no difference in the primary outcome i.e. negative RT-PCR status on day 6 of admission with the use of ivermectin. However, a significantly higher proportion of patients were discharged alive from the hospital when they received ivermectin.

Here are more human studies from other countries on the ‘horse dewormer’:
Peru:

Findings: Patients in the ivermectin group recovered earlier from hyposmia/anosmia (76 vs 158 patient-days; p < 0.001).

Conclusion: According  to  our  study,  the  Ivermectin-Doxycycline combination therapy has better symptomatic relief, shortened recovery duration, fewer adverse effects, and superior patient compliance compared to the Hydroxychloroquine-Azithromycin combination. Based on this  study’s  outcomes,  the  Ivermectin-Doxycycline  combination  is  a  superior  choice  for  treating  patients  with  mild to moderate COVID-19 disease.

Discussion: A 5-day course of ivermectin resulted in an earlier clearance of the virus compared to placebo (p = 0.005), thus indicating that early intervention with this agent may limit viral replication within the host. In the 5-day ivermectin group, there was a significant drop in CRP and LDH by day 7, which are indicators of disease severity.

Meanwhile, There are currently 76 ongoing or completed clinical trials on Ivermectin around the world. Below are the results of 32 which have been completed. One can visit ivermeta.com and dig down on any of these / read the entire study. The site recommends Ivermectin in conjunction with vaccines to confer the best protection against Covid-19, however we’ll leave that to you and your doctor to discuss.

The MSM swarmed over ‘horse paste overdoses’  for weeks after a handful cases nationwide (and no deaths) – including an outright lie amplified by Rolling Stone which they were forced to correct after the hospital in question denied the claim.

Meanwhile, the likes of Maddow, Don Lemon and Chris Hayes jumped right on the propaganda bandwagon – with Maddow promoting the debunked ER story in a tweet she refuses to delete – and Twitter refuses to censor for misinformation.