While last week’s Black (or rather red) Friday’s illiquid market meltdown was one for the post-Thanksgiving ages, and the collapse for oil bulls was one of the worst daily drops in history, we expect much of the selloff to reverse in the coming hours as the narrative that (C)omicron is the second coming of the bubonic plague, is quickly played down even by the biggest propaganda agents after even the doctors that discovered the Moronic Omicron strain said it was “extremely mild” and is likely destabilized by the dozens of spike protein mutations.

Unfortunately, the reversal of Friday’s selloff will be of little comfort to hedge funds who were already getting hammered going into the post-Thanksgiving turmoil, because according to Goldman prime, the GS Equity Fundamental L/S Performance Estimate fell -1.57% between 11/19 and 11/25, driven by alpha of -1.12% which was “the worst alpha drawdown in nearly six months” and beta of -0.45% (from market exposure and market sensitivity combined).

In retrospect, someone may have had a correct “feeling” what was coming, because heading into the Friday puke, the GS Prime book saw the largest net selling in more than 3 months (-1.5 SDs), driven by short sales and to a much lesser extent long sales (10 to 1). As the Goldman prime desk retails, single names and macro products were both net sold and made up 54%/46% of the $ net selling. 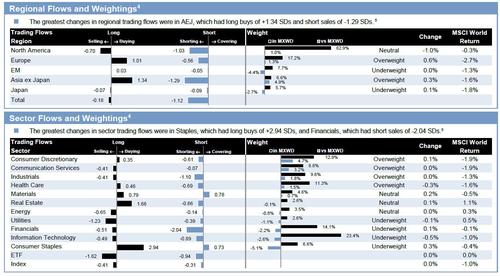 More importantly, hedge funds bought re-opening stocks and sold stay-at-home names despite reports of a new Covid-19 variant. Constituents of Goldman’s GSXUPAND basket were collectively net bought in 3 of 4 days (11/19-11/24), while constituents of GSXUSTAY were net sold for 4 straight days amid risk-off activity.

At the same time, hedge funds sold global financials stocks at the fastest pace in more than six months (perhaps as a result of the collapse in yields where yet another massive short squeeze in Treasurys has led to a plunge in rates).

Still, despite the recent net selling, Financials’ weighting vs. MSCI World ended the week at the highest level in more than 8 years, driven by O/W in Capital Markets vs. U/W in Banks and Insurance.

As usual, the full weekly note from Goldman Prime is available for our Professional subs.