Didi Global Inc. shares trading in New York jumped as much as 14% premarket after it said it would begin to delist from U.S. stock exchanges and list in Hong Kong.

According to a company press release, the ride-hailing giant’s board of directors “has authorized and supports the Company to undertake the necessary procedures and file the relevant application(s) for the delisting of the Company’s ADSs from the New York Stock Exchange, while ensuring that ADSs will be convertible into freely tradable shares of the Company on another internationally recognized stock exchange at the election of ADS holders.”

“The Board has also authorized the Company to pursue a listing of its Class A ordinary shares on the Main Board of the Hong Kong Stock Exchange,” the press release continued.

The move comes after the Cyberspace Administration of China requested Didi’s top executives to develop a plan to delist from U.S. stock exchanges last week due to concerns about leakage of sensitive information.

A delisting from the NYSE could spell trouble for U.S.-listed Chinese firms as Sino-U.S. tensions heat up. What may follow could be a series of US-to-China transfers.

Indeed, as noted recently, two decades of Chinese firms listing on U.S. exchanges could be coming to a close, as Beijing seeks to crack down on variable interest entities (VIE), a loophole used by tech companies to raise billions of dollars in capital from overseas investors. 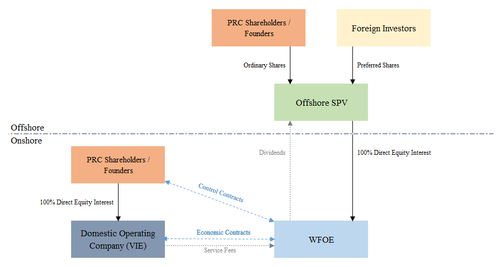 Chinese companies have used VIE to exploit a loophole and set up a legal business structure in which an investor has a controlling interest despite not having a majority of voting rights. This allowed them to raise money from overseas investors by bypassing Beijing’s restrictions on foreign investment. We noted in early September that Beijing would soon close the loophole.

The prospect of banning VIEs is part of a yearlong campaign to curb the power and address data security concerns of China’s internet sector. Beijing has called the rise of big tech a “reckless” expansion of private capital.

And just yesterday, the SEC shared its final plan for forcing Chinese firms to delist from U.S. exchanges should they refuse to open their books and abide by stringent American auditing standards.

In response to the increasing rift in financial markets between the two largest superpowers, the Hang Seng Tech Index, which tracks Chinese tech stocks, plunged 2.7% before closing 1.5% lower

Here’s what Bloomberg Intelligence is saying about the DiDi situation:

Didi’s plans to sell shares in Hong Kong and delist in the U.S. reduces risk of a messy, forced delisting by regulators in both China and the U.S. and may signal that Chinese authorities’ crackdown on it has peaked. The company’s statement bolsters our view that a Hong Kong IPO will come before a U.S. delisting, with a seamless conversion of ADSs into Hong Kong-listed shares. — Matthew Kanterman and Tiffany Tam, analysts

It appears that Didi will now serve as the blueprint for other US-listed Chinese companies to quietly pack their bags and relist in Hong Kong.