Authored by Bill Blain via MorningPorridge.com,

Markets are up and down, and the noise is focused on Covid, Central Banks, Inflation and Tech stocks. But… perhaps the big risks lie elsewhere. Where are Geopolitics headed? Faceoffs in Ukraine and Taiwan have the potential to completely derail markets. 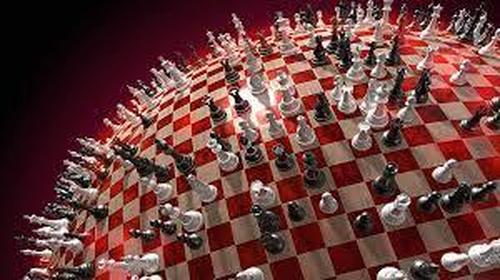 Looking at bond and stock prices there is a rising sense markets might finally have peaked. Some of the conviction underlying strength, the likely support of central banks, and the buy-the-dip games of last year, feel like it’s evaporated. There are plenty of opinions and concerns about the inflation/stagflation threat, worries about globalisation and what the pandemic might or might not still do to us. It’s easy to figure why markets are nervous today, but they might just as well be ecstatic tomorrow if these fears and tensions subside – which will likely prove the case when Covid is beaten!

As always, I take the middle road: “Things are never as bad as you fear, but seldom as good as you hope”. Now is a time for patience – waiting the current misty market front to pass through, and for the path ahead to become clearer, which post pandemic (which I hope is sooner than we expect) the situation may look very good again.

But, But and But again…. When things look good… look for bad…

One aspect that doesn’t seem to be getting quite as much focus and attention as it probably should is Geopolitics – and the specific risks global tension zones could suddenly turn hot, specifically Taiwan and Ukraine. Speaking to clients yesterday – everyone had a multiplicity of views on stocks, covid, credit, bonds and inflation, but no one was really talking about the destabilisation risks of global tension and conflict.

And that’s probably a mistake as things look likely to come to head soon in Ukraine and the South China Seas.

Maybe we discount the geopolitical threats because we like to focus on the threats we understand and can predict. We can make a decent stab at explaining predicted inflation – considering every little detail like CPI, the pace of innovation and long-term demographics, to put together well constructed arguments. We can look logically at individual stocks and sectors and make educated assumptions on business models, profits and fundamental returns. We can look at volatility and bond yields and come up with risk assumptions about correlations across markets.

But watching Europe, the US, China and Russia and trying to predict how they will behave – especially in today’s fraxious market – is like watching a game of poker in a darkened room.

You have some idea of who holds what cards, but no idea on how they might play them. We can make all kinds of assumptions about the motivations, the relative military and political strengths, and the weaknesses of each player – we really don’t know what makes them tick, what their respective appetites for risk might be, their ultimate objectives, or what they are prepared to do to achieve them.

So, this morning, I shall go off-piste on one my irregular jaunts into an area where I have no particular knowledge or experience of – although I might have some pretty good contacts. Weigh the risks and what the potential scenarios mean.

Actual hostilities would doubtless absolutely challenge markets – triggering a massive flight to quality: buy Gold and Treasuries. In such an environment you can forget about Crypto-currencies. People will want real assets. Power for computers may become dicey, and the Russians might just press the destruct button to discombobulate crypto markets/shams in order to ferment domestic dissent in the West from furious meme-stock traders who will think they’ve been robbed!

Hot wars are always a classic sell the fact moment, before turning into a potential buy moment as the news develops, if/when peace is achieved or, hopefully, the west triumphs.

But will it actually happen? Nobody really expects conflict… do they? That’s exactly what we thought in August 1914 and March 1938. Conflicts can take years to quietly fester and brew, but can turn hot in an instant on a miscalculation.

It would be a mistake to think the chances of conflict are purely down to current personalities. Distrust of Russia has characterised the West for centuries – they may be European, but they are very very different. (Personally, on the individual level Russians are great fun and I like them, but they can be very dark..) The Chinese are a very different prospect, but their 4000 years of continuous history illustrates that no Emperor or Dynasty ever sits easy on throne – whatever President Xi may think he has acheived.

Let’s try and think about the threats…

I read about the Chinese building full-scale mobile mock-ups of a Gerald Ford class US Aircraft Carrier and escort vessels in the vastness of Xinjiang’s Taklamakan desert. They are there so the Chinese can send a clear “do not interfere in Taiwan” warning. These targets will be taken out by China’s 1000 mile range DF-21D “ship-killer” missiles as a demonstration of their power projection. The Chinese believe their missiles are an effective way to deny the US from supporting for Taiwan. That matters, if conjecturally, China’s was able to “manufacture” an incident where suborned domestic politicians called for Chinese “peace-keepers” to protect the populace from an Anti-China coup. China would make the usual noise about it being a domestic issue and warn others to stay away.

But, the US Navy may disagree the missiles are an effective area-denial weapon. Taking out a number of undefended mock-ups in a desert is terribly clever, but the US Navy’s Carrier task forces are very well defended. They are working on anti-ballistic missile systems (ABM) to take down the missiles during their 15 minute flight, and can probably already disrupt the telemetry and systems guiding the missiles. Then the missiles have to get through F-18 fighters ABM screen, the Arleigh Burke class air defence destroyers and their ABM systems, and the final phalanx systems.

The Chinese will probably have to swamp each task force with multiple missiles to ensure “mission kills” (sinking carriers is actually very difficult – as the US Navy found when they sank the USS Kitty Hawk to become a reef.) But each carrier has a crew of 6000 – and the American’s will be loath to risk them.

The danger is an attack on a task force steaming to the defence of Taiwan could rapidly escalate. Neither side would be minded to back down. The missiles 15 minute flight gives the US time to warn off Beijing and threaten to launch a first Nuclear strike. The Chinese simply don’t have the warheads to match an American attack – although they are rapidly building more. Missiles in the South China Sea could turn hot in moments.

Meanwhile, the Ukraine is a major challenge to the West and Russia. There is an article in the Washington Post well worth reading if your want the background: “Russia’s rifts with the West keep growing. How did we get there.” It reads like something out of the inglorious summer of 1914.

Sit back and analyse it and both sides have backed each other into a corner. If the West sits back and lets Putin “intervene/invade” where would that leave Nato’s credibility? Putin has little alternative to look big to maintain his strong-man image. Historically, Ukraine is the road to Moscow, and its inconceivable it could end up in the hands of Nato.  He wants Ukraine back in the Russian fold and a key part, alongside Belarus, of Moscow’s security buffer.

Last week’s abortive revolution in Kazakhstan may have caught Putin by surprise, but if it was a manufactured warning from the West not to interfere in Ukraine by reminding Russia just how week some allied nations are, then it was a mistake. Its already served as an opportunity for Putin to stamp it out with Russian troops, rally his close states, forcibly reminding them who is charge, and committing them to his narrative.

Putin has repeatedly said he has no intention of invasion, successfully convincing the West he will. America has no boots on the ground, but is making a great deal of noise about the sanctions and “very angry letters telling Vladmir how angry they are” if he were to cross the border. And if Putin invades, his armies may well be tested. Ukraine’s military are not expected to last long. On the other hand, in December the Russians staged a dramatic paradrop assault exercise on the Ukraine border – but what Nato Analysts saw was a Russian Airforce short of transports and logistical support.

Long-term it may even be in the West’s interest to let Putin in – although the short-term credibility costs would be huge. The conspicuous domestic wealth of the west, and relative lack of popular support for authoritarian Putin dependent regimes in the satellite states (Belarus and Kazakhstan, and Ukraine if it’s taken) could prove a major cost and challenge for Russia in the future. And there is no way Russia can afford these costs if it’s under renewed American sanction.

Clearly any serious examination of the geopolitics of today’s market can’t be done in a couple of pages in the Morning Porridge, but I hope it makes you think. I haven’t even mentioned the raw materials and commodities dimension in regard to China, or the potential alliance that seems be forming between Putin and his “new best friend” Xi.

And I haven’t mentioned the potential no-see-um: Iran… What if Iran, encouraged under the radar by Xi and Putin, decides to go rogue in the Middle East? Ouch….

The message is simple – don’t discount the geopolitical background to the current markets.