The Cult Of Speculation Is A Cult Of Doom

The Cult Of Speculation Is A Cult Of Doom

Surely the Fed gods will affirm the cult’s most revered articles of faith. But false gods eventually fail, even the Fed. 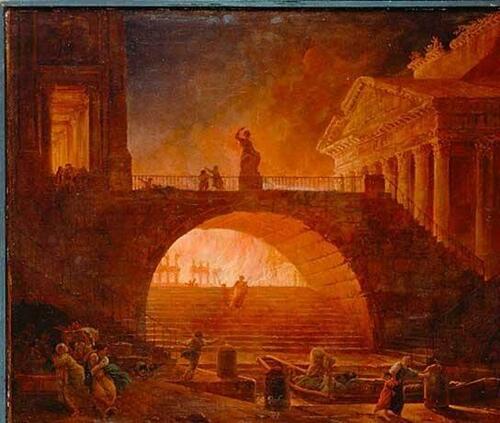 Every once in awhile the zeitgeist sets up an either / or: either the zeitgeist is crazy or I’m crazy. (OK, let’s agree I’m crazy; see, it’s not that hard to find something to agree on, is it?)

What strikes me as crazy is the global Cult of Speculation which has recruited virtually the entire human populace in a bizarre cult in which speculating wildly is now the accepted norm, a norm papered over with fine-sounding phrases such as “investing for the future,” “hold on for dear life,” “conviction trade,” “new paradigm,” and so on, all variations on the time-honored “this time it’s different.”

But speculative frenzies that sweep up everyone with a few quatloos to place on the gaming table are not different, they are the norm. Humans love gambling, winning, windfalls, something for nothing, being ahead of the pack (“the new paradigm,” etc.) and the excitement of running with the triumphant herd, all of which are fulfilled by speculative frenzies.

All the speculative free-for-all is lighthearted fun on the way up, but there is a much bleaker reality that few are willing to recognize, much less discuss: now that the global economy is in thrall to the top 0.1% and the foundations of widespread prosperity crumble into dust, the ladder to wealth, power and prestige has few rungs left.

Most of the few remaining open slots in the top tier have already been taken by insiders and the offspring of the already-wealthy, and so the only way to get ahead is to speculate and win–not just win, but win big.

In other words, the fundamental driver of this speculative frenzy isn’t just greed, it’s desperation. For the vast majority of the world’s population, speculating and winning is their only chance to escape debt-serfdom or wage-slavery.

The global Cult of Speculation is a Cult of Doom because all speculative bubbles pop, generally in a way that continues to give punters buying the dip hope that the downturn is now over and huge gains await those who back up the truck and buy, buy, buy.

The key dynamic in speculative frenzies is the self-reinforcing feedback of everyone else being confident the bottom is in to so buy now: the first blip higher convinces skittish bulls that the bottom is indeed in and so buying encourages more buying which then stampedes the herd into a euphoric confidence that this is it, the herd is running, the rally is unstoppable.

This works again and again, increasing the bulls’ confidence, until one time the herd thunders off a cliff. All speculative frenzies eventually pop because the euphoria has detached from real-world fundamentals and entered an unstable orbit of magical thinking–the Fed is all-powerful, etc.

As with all cults, skeptics and doubters are vilified and scorned: this isn’t a speculative frenzy doomed to crash, it’s rock-solid because don’t fight the Fed, strong earnings, new paradigm, etc. Those outside the cult look on in wonder at the strange rituals and extreme behaviors. Wise outsiders avoid any contact with the unstable, skittish herd.

We’re now in the confounding stage where buying the dip isn’t working 100% of the time, and so the cult is losing adherents even as the faithful double-down and demand evidence of fealty. Surely the Fed gods will affirm the cult’s most revered articles of faith. But false gods eventually fail, even the Fed.

Once the false gods fail, the once-crowded temple of the cult is abandoned and left to the jungle. Visitors marvel: here great fortunes were made and lost, and now there’s nothing left but rubble.

My new book is now available at a 20% discount this month: Global Crisis, National Renewal: A (Revolutionary) Grand Strategy for the United States (Kindle $8.95, print $20).  If you found value in this content, please join me in seeking solutions by becoming a $1/month patron of my work via patreon.com.