Was that it for the oil plunge?

Having nearly reversed all of the post-Ukraine gains following its latest 4% drop on Monday, oil staged a powerful recovery on Tuesday as traders weighed China’s demand outlook following the easing of some virus restrictions in the financial hub of Shanghai, while tensions over the war in Ukraine escalated.

WTI rose soared than 6% to trade back over $100/bbl after news overnight that Shanghai eased lockdowns for some housing complexes, but most people remained confined to their homes, and authorities have indicated they will reimpose restrictions if virus cases climb.

Prior to this morning’s surge, oil had given up almost all its gains since Russia’s invasion of Ukraine in late February.

Meanwhile as Bloomberg notes, U.S. drivers are receiving a break at the pump with gasoline prices falling for two straight weeks after hitting a record high in early March. Average national gasoline prices dropped to $4.114 a gallon on Sunday, the lowest level since March 6, according to auto club AAA. The last time a losing streak endured for this long was in September 2020. Lower fuel costs offer some relief to American consumers who have been grappling with higher prices from food to housing amid decades-high inflation. 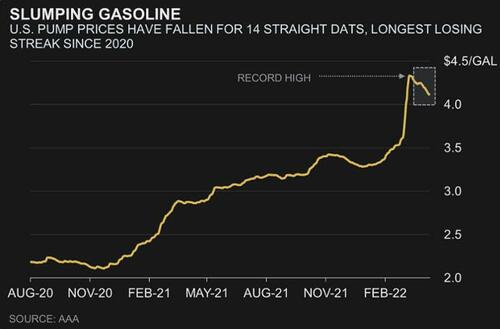 The Brent prompt spread extended its recent retreat on Monday, falling to the weakest level this year. The equivalent WTI marker was the softest since Jan. 4, while key physical North Sea swaps also slid. Three broad-based commodity ETFs posted combined inflows of more than $170 million as of Monday. The ICE gasoil spread was volatile ahead of today’s expiration.

In other news, OPEC’s top diplomat told EU officials that the current crisis in global oil markets caused by Russia’s invasion of Ukraine is beyond the group’s control. Russian oil supply losses stemming from current and future sanctions or a boycott by customers could potentially exceed 7 million b/d, OPEC Secretary General Mohammad Barkindo said on Monday.

That would be far beyond the group’s capacity to replace, he told EU Energy Commissioner Kadri Simson, who had asserted the cartel’s responsibility to balance the market.