This morning, the earnings reports from the big US money-center banks concluded when Bank of America reported better-than-expected first-quarter results. Similar to its major bank peers, BofA reported very strong sales and trading revenue (which at $4.7 billion topped the average analyst estimate of about $4.3 billion), offset by weaker than expected investment banking revenues and in line. Overall, revenue came in at $23.23 billion, up 2% Y/Y (and 5% Q/Q), and just shy of the $23.24 billion expected, resulting in EPS of $0.80, which beat consensus estimates of $0.74 if coming below the $0.86 in Q1 2021. 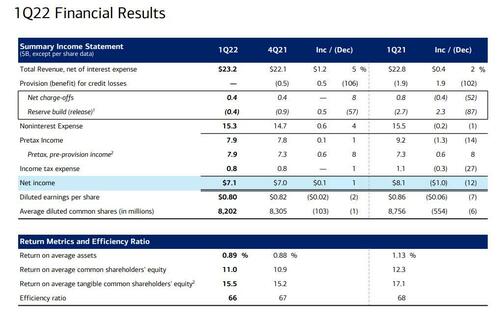 The bank also reported net interest income of $11.68 billion, up 13% from $10.3 billion, which also modestly missed estimates of $11.72 billion. NIM rose again, from 1.67% to 1.69%, which was also below the 1.71% consensus estimate, with the bank clarifying that a 100bps parallel shift in the rate yield curve is estimate to benefit net interest income by $5.4BN over the next 12 months.  The increase in net interest income was “supported by strong loan and deposit growth,” CFO Borthwick said in the statement. “Going forward, and with the forward curve expectation of rising interest rates, we anticipate realizing more of the benefit of our deposit franchise.” 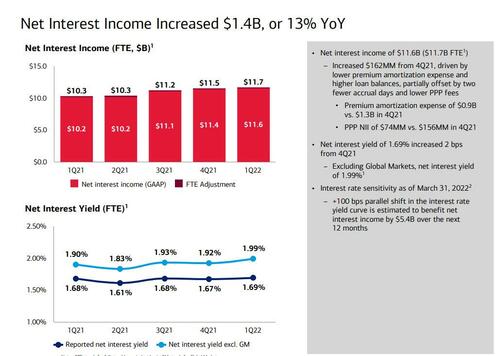 Some more key details from the quarter:

“First quarter results were strong despite challenging markets and volatility,” Chief Financial Officer Alastair Borthwick said in a statement. “Going forward, and with the forward curve expectation of rising interest rates, we anticipate realizing more of the benefit of our deposit franchise.”

Bank of America is focused on its clients and their trading execution “during what has been a very challenging environment,” while having invested “substantially” in that business, Borthwick added in a call with reporters Monday.

The bank also said that “strong commercial loan growth as well as higher consumer balances” helped drive average loan and lease balances up 8% versus the prior year, to $978 billion. Meanwhile, Bank of America noted that its direct exposure to Russia was “very minor,” although again like many of its peers, BofA built some reserves related to that exposure, and as noted in the slide below, the bank’s provision for credit losses in Q1 rose to $30 million, below the estimated $366.2 million but the first provision since the covid crash. 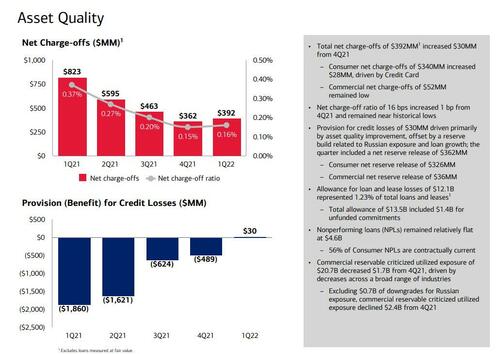 Focusing on the bank’s trading and banking divisions, here the pattern was familiar, with markets beating estimates while i-banking missing.

Meanwhile, on the expense side, noninterest expense of $3.1B decreased 9% vs. 1Q21, driven by the absence of expenses related to a liquidating business activity, which was realigned from Global Markets to All Other in 4Q21, and lower incentive compensation due to the absence of 1Q21 award changes. 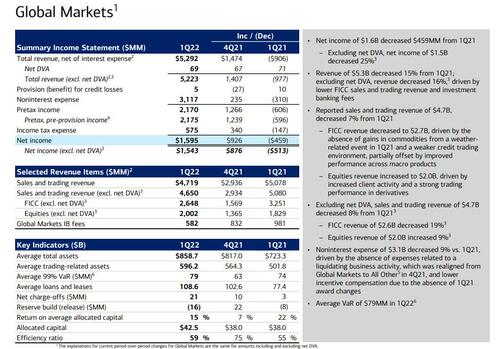 While trading was solid, investment banking revenue at BofA was also disappointing, $1.457 billion, below the estimate $1.67 billion, and down 35% from $2.246 billion a year ago; global banking IB fees was even uglier at just $880MM, down from $1.18 billion a year ago. Additionally, the bank also disclosed that a $0.2BN provision for credit losses in the Banking group reflected “a reserve build driven by Russian exposure and loan growth, compared to a reserve release in 1Q21.“ 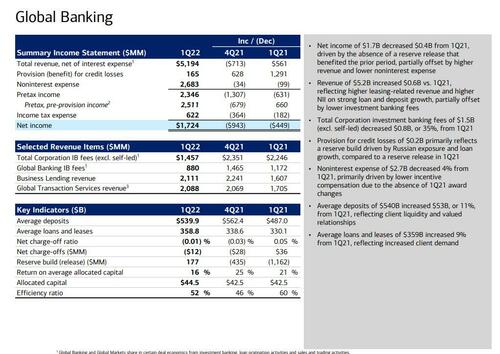 Turning back to the balance sheet, we find continued growth, with both deposits and loans rising, while shareholder equity shrank to $239BN, leading to a drop in the bank’s TCE ratio from 6.2% a year ago to 5.3%. And yes, thanks to buybacks BofA’s total shares outstanding declined by half a billion from 8.59BN to 8.06BN. 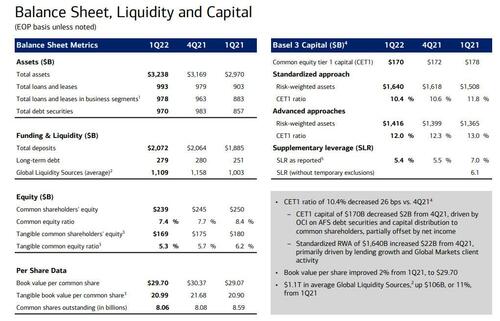 Digging deeper, we find that total loans of $993.1 billion came in higher than the consensus estimate of $986.44 billion, and back to where they were right before the covid crash. 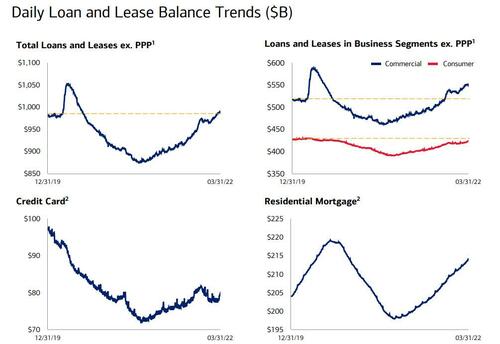 Lending has been a key focus for investors, with government stimulus programs keeping demand weak for much of 2021 and historically low interest rates hurting net interest income, the revenue collected from loan payments minus what depositors are paid. But dwindling federal-aid programs and rising rates are starting to turn that around. 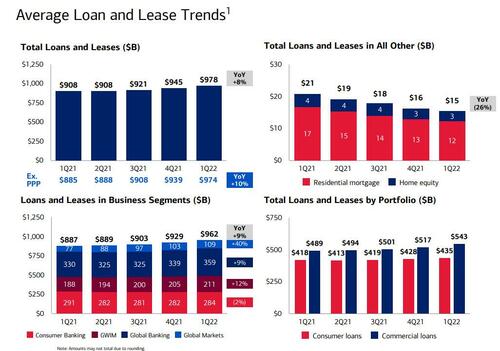 Total deposits of $2.07 trillion were just below the estimate of $2.09 trillion. 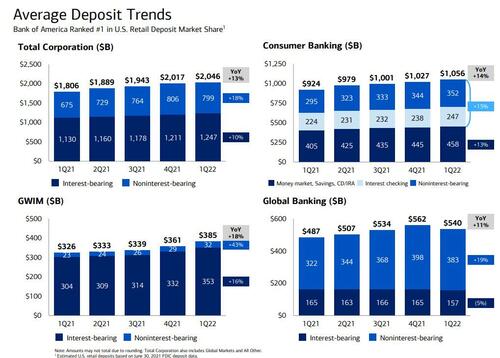 Once QT – and the drain of liquidity begins – expect to see a big decline in deposits.

Moving on, we next look at the bank’s expense and efficiency, where we find that BofA’s efficiency rate declined both Y/Y and Q/Q, to 66%. According to the bank, “noninterest expense of $15.3B decreased $0.2B, or 1%, vs. 1Q21; compared to 4Q21, non-interest expense increased $0.6B, driven by seasonally higher payroll taxes and a modest increase in salaries and benefits.”

Some more details from the bank’s comments:

Next, some of the key comments from CEO Moynihan and CFO Borthwick:

Here’s what several Wall Street analysts said about the results:

Despite otherwise solid results, Bank of America shares were down at $37.2 in early New York trading. They’ve declined 5.8% in the past 12 months, compared with a 5.6% decrease for the KBW Bank Index. 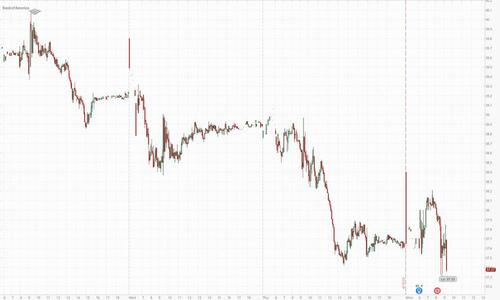