UK headline inflation hit 9% in April, marking its highest level in 40 years thanks in large part to the rising costs of gas and electricity which has driven the average bill close to £2,000 (US$2,484), according to the Office for National Statistics.

Average petrol prices rose to a record 161.8p a litre in April 2022 from 125.5p a year earlier. Diesel was another factor behind the increase in the consumer prices index from 7% in February after the average cost at the pumps hit a record high of 176.1p a litre, leading to an average increase over the last 12 months in motor fuels of 31.4%. –The Guardian

Meanwhile, food banks are reporting an increase in demand for food packages, while small business owners say a combination of higher taxes and increased costs have pushed them to the edge of bankruptcy, according to the report. 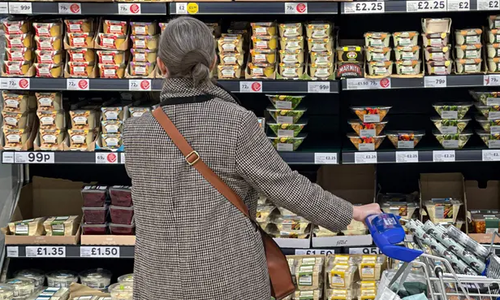 Adding to the problem is the end of a temporary VAT cut for the hospitality industry from 20% to 12.5%, as hotels and restaurants say they can’t shield customers from the increase.

According to the Resolution Foundation cited by The Guardian, the poorest 10% of households faced an inflation rate of 10.2% in April, significantly higher than the 8.7% felt by the top 10% of earners. 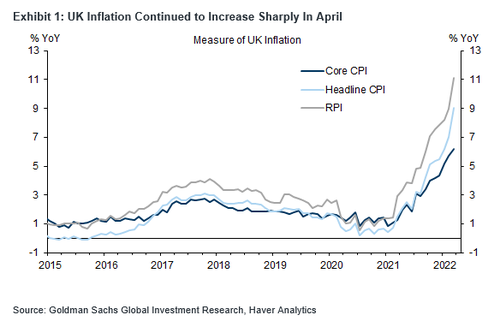 The pain is being felt across all sectors of industry and commerce, putting pressure on the government and central bank to take action as we noted earlier Wednesday. Meanwhile, investors pared back bets on BOE rate hikes in anticipation of the scorching inflation, with money markets pricing around 120bps from the previous day.

And of course, a steep fall in the pound is not helping the cost of imports, with sterling slumping from $1.30 last month to $1.24 after dipping to $1.22 last week, making it the worst G-10 performer.

Consequently, the Misery Index – which adds inflation and unemployment, is also back to Thatcher-era levels. 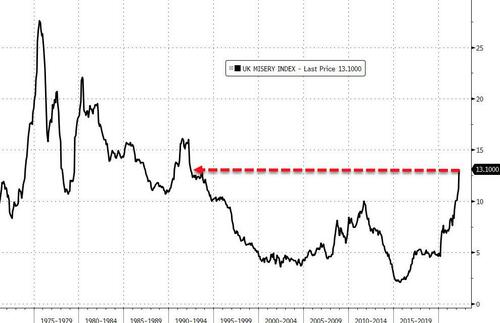 Interestingly, according to Goldman, the UK core CPI increase from +5.71% in March to +6.19% in April vs their respective levels one year ago is “in line with consensus expectations.”

The increase in the year-over-year headline rate was driven by the 54% increase in Ofgem’s price cap, and a sharp increase in sequential food inflation (+1.66%mom vs +0.05%mom in March and +0.84%mom in April last year). Within core inflation, there were upwards price pressures in restaurants and hotels due to the increase in VAT from 12.5% to 20% in April and due to more volatile categories, such as games and toys.

Yet, while Goldman expects ‘strong wage growth,’ labor market figures released on Tuesday showed that growth in real wages has lagged behind the surge in inflation.

In an attempt to mitigate the effects of inflation, the British Chambers of Commerce has called for the chancellor to hold an emergency mini-budget, according to The Guardian.

“The scale at which inflation is damaging key drivers of UK output, including consumer spending and business investment, is unprecedented and means there is a real chance the UK will be in recession by the third quarter of the year,” said Suren Thiru, the head of economics at the BCC.

Chancellor Rishi Sunak indicated he may try to find solutions to boost the incomes of those with the lowest pay, however the cabinet is reportedly split on how to fund billions of pounds in extra welfare. Some have suggested a windfall tax on oil and gas companies.